USD/CAD pulls back from key level ahead of BoC, jobs data

USD/CAD pulled back sharply from the key 1.3000 psychological level on Tuesday, ahead of Wednesday’s interest rate decision from the Bank of Canada and Friday’s employment reports from both the US and Canada. This pullback occurred as the US dollar resumed its recent weakness on Tuesday amid continued fears of a potential trade war sparked by US President Trump’s plans to impose steep import tariffs. While the US dollar has indeed come under increased pressure after Trump’s tariff plans were announced, the negative impact on Canada and the Canadian dollar has been even worse. This is due to Canada’s traditionally heavy trade reliance on the U.S. and the already-tenuous status of the North American Free Trade Agreement (NAFTA), which is still in the midst of being renegotiated among the U.S., Canada, and Mexico.

The strong uptrend for USD/CAD since the early February lows around 1.2250 has been driven in part by the continuing contrast between an increasingly hawkish Federal Reserve and a Bank of Canada that, while also in the process of tightening monetary policy, is not expected to be nearly as aggressive as the Fed. Wednesday will provide some indications as to whether these expectations will be supported, as the BoC will be issuing its latest rate decision and statement. The central bank’s last rate hike was implemented at its previous meeting in January, when the overnight rate was raised 25 basis points to 1.25%. Last month, Canadian Consumer Price Index inflation data for January showed that prices rose substantially more than expected at +0.7% against prior expectations of +0.4% and a previous month’s reading of -0.4%. The unexpectedly high inflation reading boosted the Canadian dollar as markets speculated on the higher potential for more policy tightening and rate hikes by the Bank of Canada. However, this potential may have just been lowered again, as uncertainties surrounding U.S. trade tariffs and NAFTA could help preclude the central bank from raising rates further at this time.

USD/CAD will clearly also be impacted this week by both U.S. and Canadian jobs reports on Friday. As for the U.S. report, given that recent market turbulence was initially driven in part by higher-than-expected wage growth figures in the last jobs report, this piece of data will take on particular importance. Current consensus expectations for month-over-month average hourly earnings growth are running at +0.3%. The unemployment rate is expected to have fallen to an extreme low of 4%, and the headline non-farm payrolls is expected to have risen by around 205,000 jobs.

In the runup to the Bank of Canada decision and the key jobs reports, USD/CAD continues to display trending strength. Amid ongoing Canada/U.S. trade uncertainties and the likelihood that the Bank of Canada will remain more dovish than the Fed, USD/CAD is currently still biased to the upside. As noted, the uptrend since early February just bumped up against the key 1.3000 psychological resistance level. With continued weakness in the Canadian dollar, any subsequent breakout above this 1.3000 level would confirm a continuation of the short-term uptrend, with the next key target around the 1.3200 resistance level. 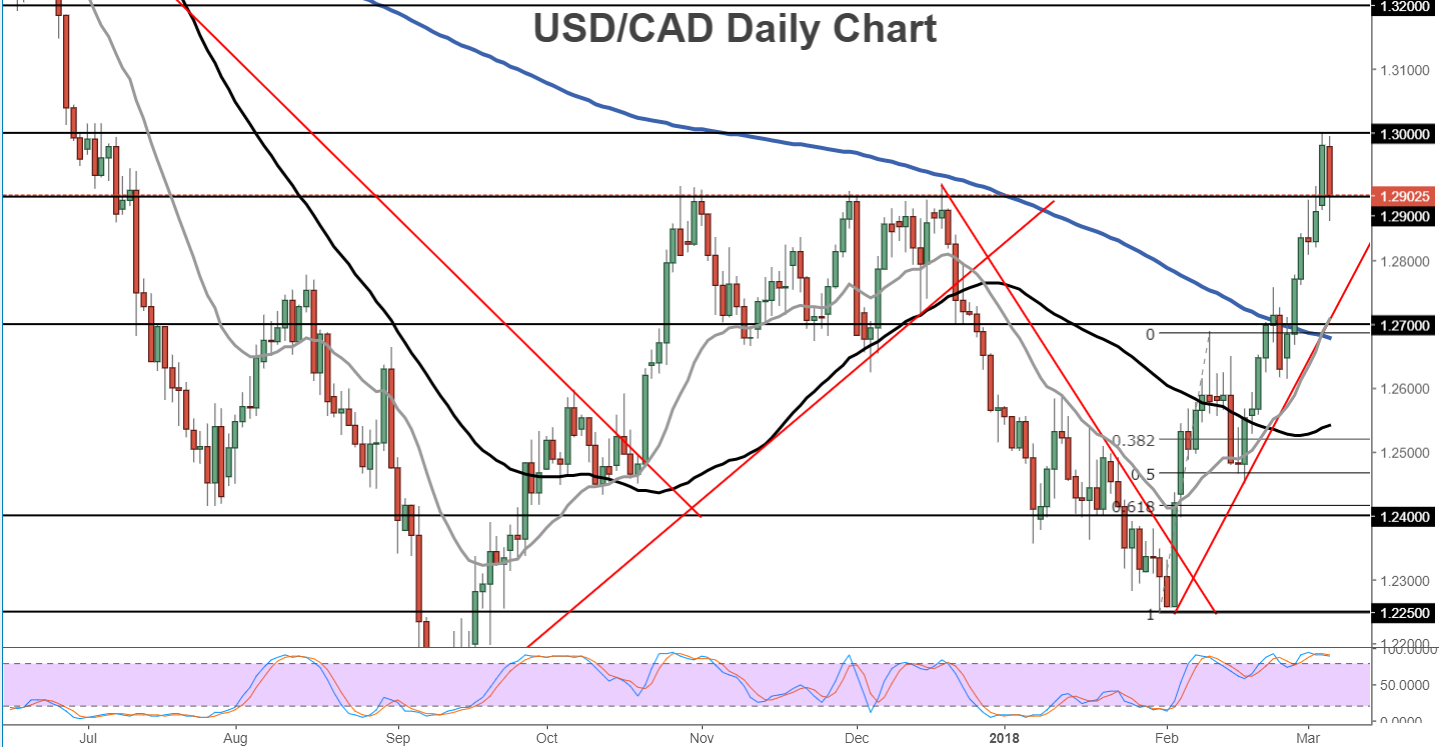