The conditions for a higher USD/JPY have been perfect. US inflation continues to rise above expectations (and at an alarming rate), whilst the Fed’s 50 and forthcoming 75-bp hikes are doing little to dent it.

But we also have the BOJ fixated on an ultra-loose monetary policy, with both the central bank and government of Japan openly backing a weaker yen. And whilst there was some speculation the BOJ will be forced to intervene (to strengthen the currency) or adjust their yield curve control, no such action has risen whilst rhetoric from the central authorities of Japan favours a weaker currency. 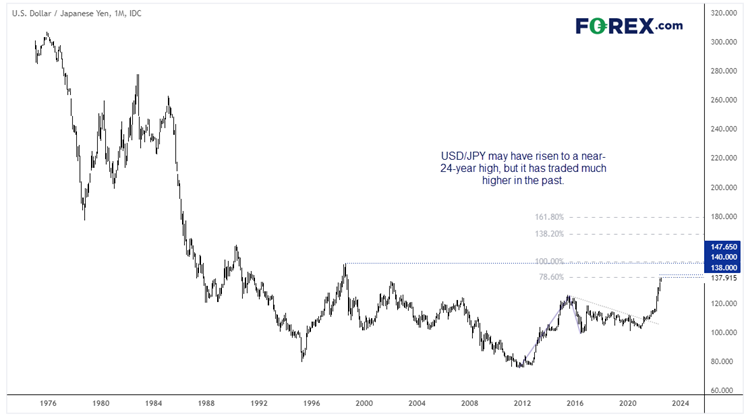 So today we saw USD/JPY rise to 138 for the first time since September 1998. Compared to recent history this is a very high level. But if we stand back and look at the longer-term picture then we can see it has traded much, much higher (twice as high, in fact). But to provide some historical context on how far this rally has come and what life was like the last time we traded here, we’ve picked out some historical facts from September 1998. Clearly this serves no market purpose, but it may provide some context for those newer to the game and some memories for those who are not.

What was going on when USD/JPY traded around 138 in September 1998? 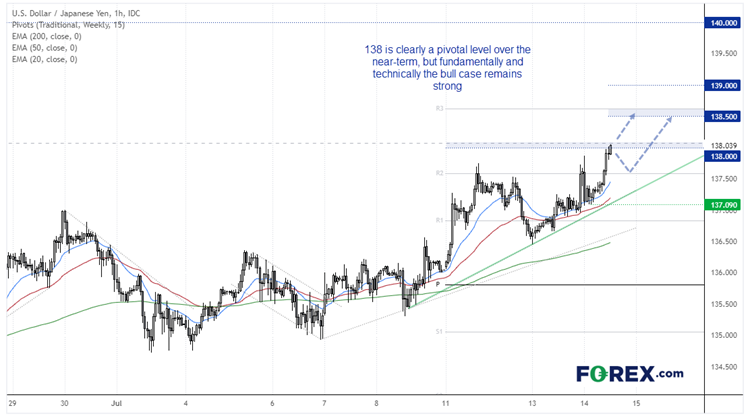 Back to the present day, we can see the rally has paused for breath around 138. It remains to be seen whether we’ll see a clear break higher in Asia, or simply pull back before a break in a later session or two. But I can see the US yields are rising (which tends to benefit USD/JPY bulls), and the 1-week put interest (downside protection) is its most active in a month.

For the fundamental reasons mentioned above, a move to 140 seems more than achievable and the technical shows a strong bullish trend. So even if prices do pull back from 138, I suspect it will remain of interest to bulls, with 138.50 making a likely interim target.