Whilst inflation may have peaked, the ‘Nowcast’ seems less certain

Markets rejoiced at the latest inflation report from the US, as CPI fell below estimates for the first month in 11. The US dollar was broadly lower against its peers, commodities rallied on the back of the weaker dollar and expectations of a less aggressive Fed, and stock markets rallied. The moves were strong enough to almost forget the base case for bulls is a recession and inflation over 8%. But then again, whilst this is clearly not a bullish backdrop, the forward-looking markets are simply rejoicing on the fact that things are not as bad as expected (even though they still don’t look great).

We outlined a case for peak inflation in yesterday’s article – Another look at (peak?) inflation. And whilst the case is strong for inflation to at least be nearing a peak, the Jury remains out as to whether the actual peak is in place. The sharp drop in gasoline prices was a large contributor to July’s softer inflation set, and if growth fears persist and they weigh on demand, the case for peak inflation grown. However, if we look at the Cleveland Fed’s NowCast inflation figures, we’re a little less confident we have actually seen ‘the’ peak.

‘Nowcasting’ is a process of forecasting a current economic indicator for lagging data. As most economic data sets are backwards looking, it is a useful tool for investors as it can help guide expectations for future releases. The Fed Atlanta began a GDP Nowcast a few years ago and it is a widely followed estimate, as GDP is one of the most lagging indicators around.

The Cleveland Fed also provide a Nowcast for US inflation, including CPI, core CPI, PCE and core PCE. The chart below shows the latest CPI prints (white line), and the coloured bars show the Nowcast estimate for inflation as of the 8th of August. 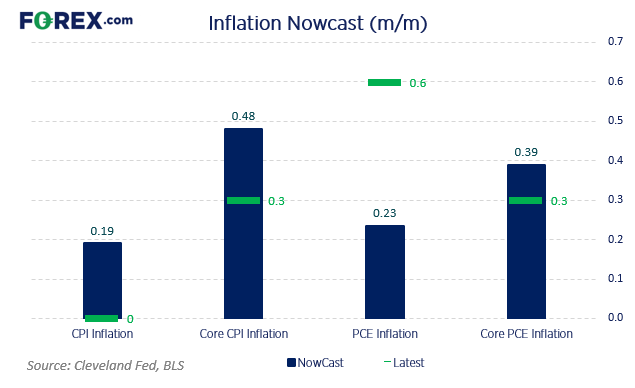 In a nutshell, whichever inputs the Cleveland Fed use for Nowcasting suggests inflation is already higher than in July. And if that is to be the case in the official data next month, calls for peak inflation seem premature. And that will impact expectations for the Fed’s policy rate, trajectory and terminal level, alongside the US dollar. Over the near-term the dollar is under pressure and we’re keeping our eyes on how it reacts around key level of support.

The US dollar index has rallied over 22% since the January 2021 low, and its rally stalled just shy of the 2002 high. A bearish pinbar formed in July to warn of trend exhaustion and the dollar is now within its fourth week of a retracement against that trend. 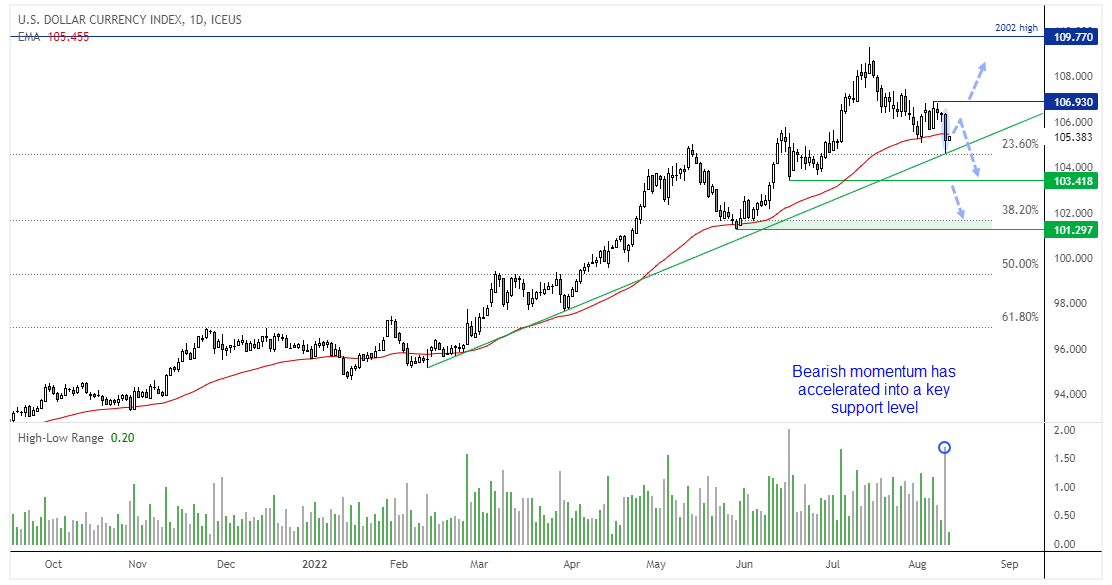 The daily chart shows that bearish momentum has accelerated and prices broke to a 6-week low. Yet support was found at a key trendline and 23.6% Fibonacci ratio. We therefore see the potential for a corrective bounce within yesterday’s range, although the bias remains for a break below the trendline. A break of yesterday’s low brings the 103.42 low into focus, whilst a break above 106.93 assume bullish continuation. A likely driver of dollar direction over the foreseeable future is commentary from the Fed, as they guide markets towards (or against0 the likelihood of a 75bp hike at their next meeting.