The International Energy Agency (IEA) wanted that 3,000,000 bpd of oil from Russia could be shut-in within the next 3 months.  Crude oil prices reversed the recent selloff and climbed back above $104 as the IEA noted that the higher fuel costs would only create a loss of 1,000,000 bpd.  In addition, Russian/ Ukraine talks seems to be taking a turn for the worse.  Reports yesterday by the FT that Ukraine and Russia were going to draw up a neutrality plan to end the war were said to be premature by Russia and denied by Ukraine.  Today, Ukraine President Zelensky drew up his own list of demands to end the war.  One of these was that the Ukraine borders as of 1991 must be recognized.  Many traders feel that this may be too much to ask for.

On December 2nd, WTI Crude Oil made a low of 62.78. By March 7th, the price had more than doubled to a 131.30 on the Russia invasion of Ukraine and the resulting sanctions. These actions had moved the price of oil into high gear. Notice how overbought the RSI was at the time, hinting that the move higher couldn’t be sustained. Since then, hopeful comments of a ceasefire had pushed oil back to a near-term low of 93.97 on Tuesday, before resuming higher today and rising nearly 8%.  First support is at a confluence of Tuesday’s low and the 50 Day Moving Average between 93.42 and 93.97.  Below there, WTI can fall to the 61.8% Fibonacci retracement from the December 2021 low to the March 7th highs at 89.99, then the neckline of the double bottom near 85.39. 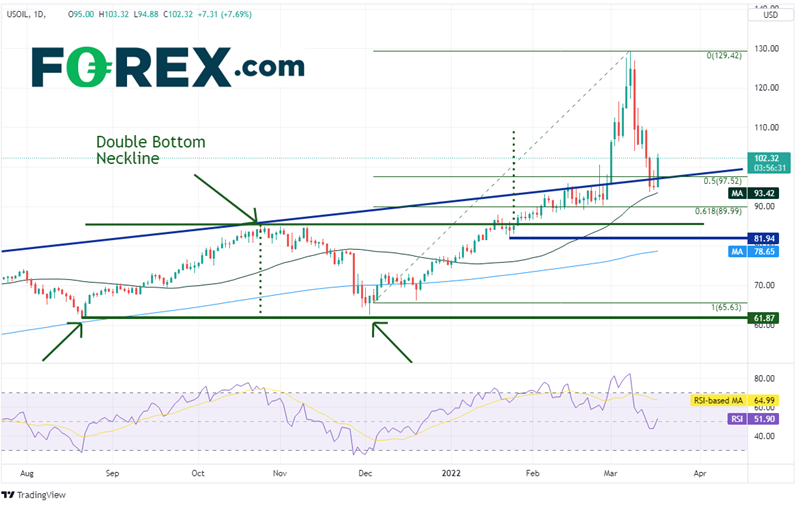 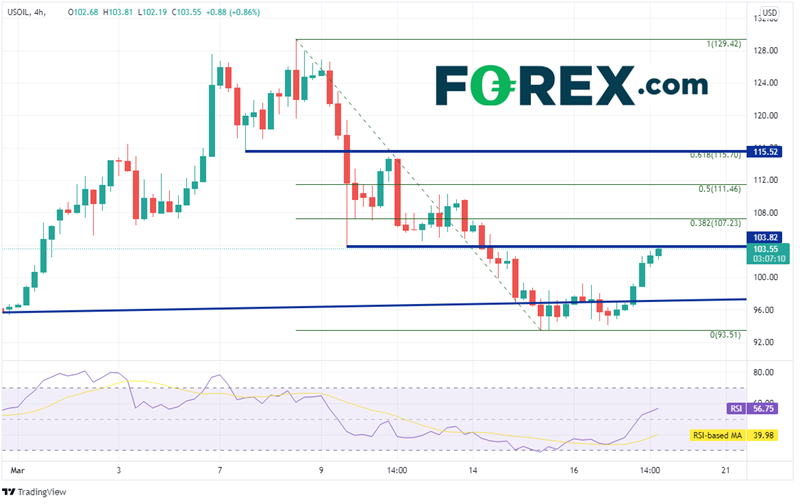 Some traders may be looking for a currency pair that is highly correlated to WTI Crude Oil.  USD/PLN has a correlation coefficient of +0.91.  A correlation coefficient of +1.00 means that the 2 assets move in the same direction 100% of the time.  +0.91 is considered strong.   If one believes that Crude Oil is moving higher, there is a good chance that USD/PLN may move in the same direction.  A strong confluence of resistance sits above at the March 9th lows, the previous high, and a long-term upward sloping trendline between 4.2956 and 4.3253.  Above there is the horizontal resistance at 4.4416.  First support is at the 61.8% Fibonacci retracement level from the lows of February 10th to the high of March 7th at 4.1832, then horizontal support at 4.1046. 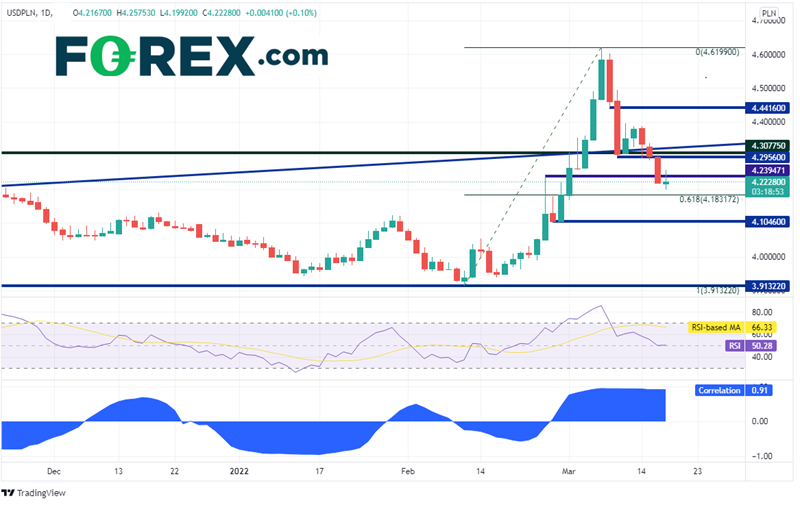 WTI Crude Oil soared over 8% today in what has been extremely volatile March.  Today’s move was due to concerns from the IEA that 3,000,000 bpd may be shut-in by Russia, along with a perceived break-down in talks between Russia and Ukraine.  USD/PLN has a very high correlation with WTI.  Therefore, if one doesn’t have access to trade Crude Oil, USD/PLN may be a good substitute!