Short squeezes: why do they happen and how do they work?

A short squeeze is the term to describe a rapid rise in price that forces traders who have shorted a security to buy at a loss. The price increase encourages more buyers, which promotes an often-irrational bullish sentiment, and literally ‘squeezes’ sellers out of the market.

When a security is shorted, traders effectively borrow shares from their broker in order to sell them on, with the intention of buying it back at a later date at a lower price. The difference between the initial sell price and a lower buy price represents the profit.

However, if the market rises instead, then the seller will be forced to buy back the shares at a higher price for a loss.

This is what happens in a short squeeze, and then some – the market turns to the upside, so in order to limit their loss, short sellers rush to close their position. If enough market participants act the same way, the security will surge higher, forcing more and more short sellers to close their trades at a loss.

Learn more about how to short a stock

What causes a short squeeze?

A short squeeze is caused by a change in the opinion of investors and traders – they go from an overwhelmingly negative view to a positive one. This change is rapid and can be triggered by a few factors.

Firstly, there are fundamental drivers. These events can be economic data releases, company earnings or even just news about a stock can set shift the mindset of traders – especially after a security becomes oversold.

For example, Tesla shares were falling in value amid production issues and a crash involving one of its models, leading to a short squeeze when a reversal influenced by an Elon Musk tweet prompted many to exit their short positions.

Then there are technical indicators. When certain levels are hit and signals are sent out, huge numbers of technical traders can spring into action. Key price points indicate when a stock is oversold, and when they’re met it indicates a potential reversal of a downtrend, which may lead to a short squeeze.

How to find short squeeze stocks

There are a few ways to find stocks that could be about to see a short squeeze, including:

How to trade a short squeeze

Once you’ve identified a short squeeze stock, you can take your position. When you trade with FOREX.com, you can go long or short on hundreds of shares, enabling you to take advantage when markets decline and rise.

To start trading a short squeeze today, follow these steps:

Alternatively, if you don’t feel ready to trade live markets, you can practise your strategy in a risk-free demo account.

In 2008, during the global financial crisis, Volkswagen shares were subjected to a short squeeze caused by fellow automaker, Porsche.

The luxury car manufacturer announced in 2006 that it would be buying more shares of VW. Coupled with the German government’s 20% stake in the company, it meant that only a small number of shares were available for public investors. This began a bullish run on the stock, which was fuelled by rumours than Porsche would be increasing its stake.

The rally continued throughout 2007 but hedge funds and investors started to view the stock as overvalued – not only because car demand dropped dramatically during the crash, but because it had amassed significant debt.

As an enticing short selling candidate, the stock was expected to drop. And when Porsche confirmed it would not be increasing its holdings in VW, it seemed inevitable so many began borrowing the shares to sell.

However, over the next six months, Porsche reversed its decision and announced that on top of the 42.6% stake it already held in Volkswagen, it had acquired another 31.5% stake using cash-settled call options.

The announcement caught the hedge funds and short-sellers off guard, as with Porsche’s new 74.1% stake and the German governments holdings, there were fewer than 6% of VW shares available to trade.

The short sellers were completely cornered, having borrowed an estimated 13% of VW shares and shorted them. This means the sellers had to repurchase 13% of the shares with only less than 6% were available.

The scramble that ensued caused the stock to jump from €210 to over €1,000 in just two days, forcing short-sellers to buy back at higher and higher prices in a bid to cover their short positions.

Volkswagen briefly became the world’s most valuable company, reaching a market capitalisation of $370 billion. However, after the stock’s peak on Oct. 28, 2008, its price plunged by 58% in four days. 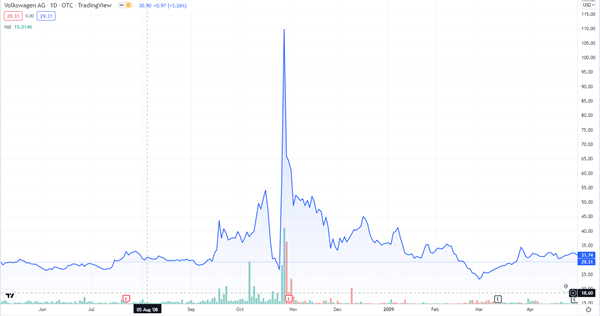 Tesla is famously one of the most shorted stocks on the market. The main reason behind the bearish sentiment is that Tesla’s valuation is so high compared to its earnings, leading many to believe it’s overbought.

In early 2020, over 18% of Tesla shares were in short positions. At odds with the more than 400% rise the share price had seen over the last few months. Anyone who had entered a short trade was losing big.

It then seemed that the coronavirus crash came at the perfect time, as the sell off saw short sellers make billions in just a few days in March 2020.

Then came the short squeeze. In August 2020, Tesla shares rose from $300 to $450 in a month, spurred on by nothing more than good press. By the end of 2020, short sellers had racked up approximately $40 billion in losses.

In November 2021, TSLA shares had risen well beyond the $1000 mark and yet short sellers were still betting in droves that it would fall. Because the problem is, they’re not entirely wrong. By the end of January 2022, Tesla had fallen by 12% and the bearish cohort had made $2.3 billion mark-to-market profits.

There’s no dramatic chart for the Tesla short squeeze, it’s simply an example of how a company that has captured the public’s imagination can create a perfect storm. 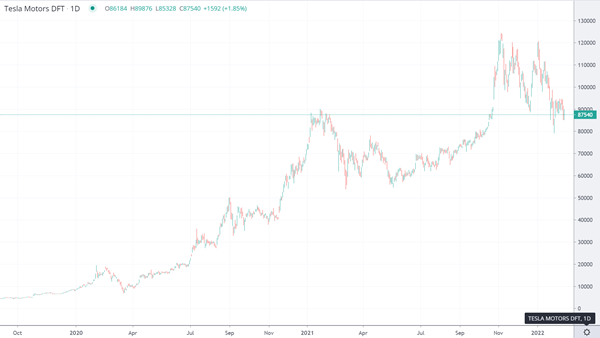 In January 2021, shares of GameStop rose by more than 1000% amid a short squeeze that targeted fund managers on Wall Street.

GameStop was a popular video game and electronics retailer which was reasonably successful until the rise of online services caused the demand for physical goods to decline. GameStop struggled to adapt, which led to increasing losses for the company and saw the share price fall.

The stock had been trading at around $2.57 when users of Reddit’s WallStreetBets thread decided it was undervalued – not necessarily based on fundamentals, but out of affection for the struggling company. They were also driven by a collective distain for the ‘toxic’ hedge funds and Wall Street institutions who were profiting from GameStop’s fall.

Over the space of a few days, the community pushed GME’s price up to highs of $500 and caused the short-sellers to lose considerable amounts of cash trying to cover their positions. It’s reported that some funds went out of business because of their short-holdings, while mark-to-market losses peaked at $6 billion.

It’s now a prime example of the David versus Goliath mentality of retail traders. And over a year later, GameStop is still one of the most discussed stocks on Reddit. 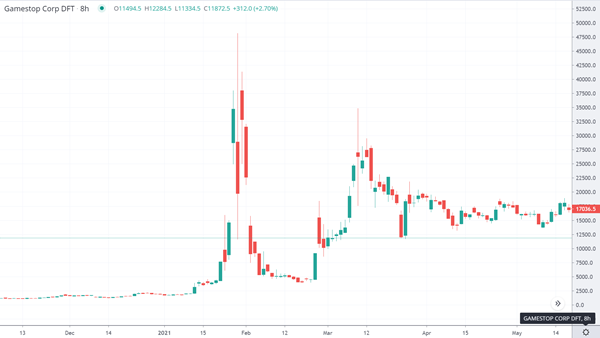 AMC Entertainment stock was heavily shorted as the company faced bankruptcy due to the enforced closure of cinemas at the start of the coronavirus pandemic. The company’s share price fell from around $6 to just $2 in March 2020.

To raise capital, AMC was forced to sell 131 million shares in at the market offerings and to a group called Mudrick Capital. It attempted to issue more shares a few times throughout April 2020 but had to cancel the sale each time.

It was at this point that the squeeze began. Unlike the other short squeezes, AMC’s was eked out over a few months, rather than a couple of days. In May 2020, buyers started showing interest in the stock – it rose back up to the $4/5 mark.

Cut forward to January 2021, and a community had grown online, dubbed the ‘apes’, who had already convinced hundreds of thousands of people to buy AMC shares. Thanks to an influx of retail investors – again spurred on by r/WallStreetBets and YouTubers – the demand for the stock caused a mini-squeeze that pushed the price from $3 up to nearly $19.

But the bigger event was yet to come. In May, the apes had managed to push the price up to nearly $30, but then AMC announced free popcorn for all retail investors on June 2. Shares of AMC flew up from $30 to $63 in one day.  The hedge funds and financial institutions who had taken bearish positions lost billions. 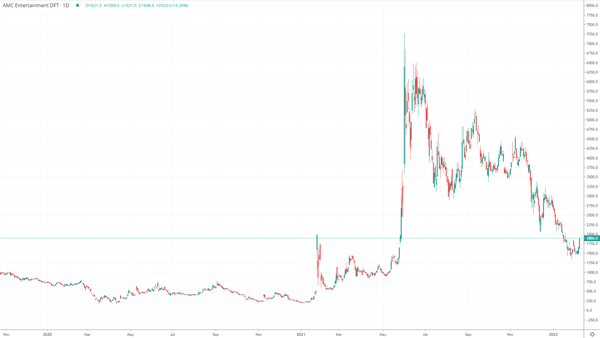 Meanwhile, the ‘dumb money’ – as retail investors are often called – that bought AMC in May 2021, would have seen their holdings increase by over 700%.

As of February 2022, AMC is still one of the most shorted stocks on the market.