During the early European session, the US dollar eased off the highs before turning lower ahead of the publication of US inflation report this afternoon. This drove the likes of the EUR/USD, GBP/USD and gold higher. However, don’t be fooled by the apparent dollar weakness here. Its weakness is undoubtedly driven by profit-taking ahead of the publication of US CPI report. I reckon, it will resume higher, possibly as early as later today. The greenback remains head and shoulders above the rest of the major currencies in terms of strength thanks to the Fed’s hawkish stance and a relatively stronger US economy.

Prior to today’s weakness, the greenback had been in renewed demand due in part to firmer data on both the jobs and inflation fronts. On Wednesday, the RPI measure of inflation was a tad stronger than expected, which led to speculation that CPI will also overshoot when it is released later today. On Friday, the latest US non-farm payrolls report continued to point to a healthy jobs market.

With employment at or near maximum, the Fed’s other mandate of keeping inflation close to 2% means it has no choice but to keep on hiking rates until CPI falls sharply and keeps on trending lower from its current 8.3% annual rate. Indeed, the minutes of the September FOMC meeting highlighted that a dovish pivot is still nowhere in sight. Policymakers are in agreement that the risk of doing too little outweighs the risk of hiking too aggressively.

Unless CPI comes in well below expectations of 8.1% today, the dollar rally and stock & bond market weakness is likely to continue, as hopes over the Fed potentially pivoting to a slightly more dovish stance will be dashed… again. Consumer inflation has fallen very slightly in the last couple of months and another print lower would be a welcome sign. However, for the dollar to weaken we will need to see a big drop below expectations.

If PPI is anything to go by, then CPI might actually disappoint those looking for a sharp drop. If that’s the case, the dollar bulls will be happy to keep the currency bid until something changes dramatically.

With that in mind, take this breakout on the hourly chart of the EUR/USD with a pinch of salt: 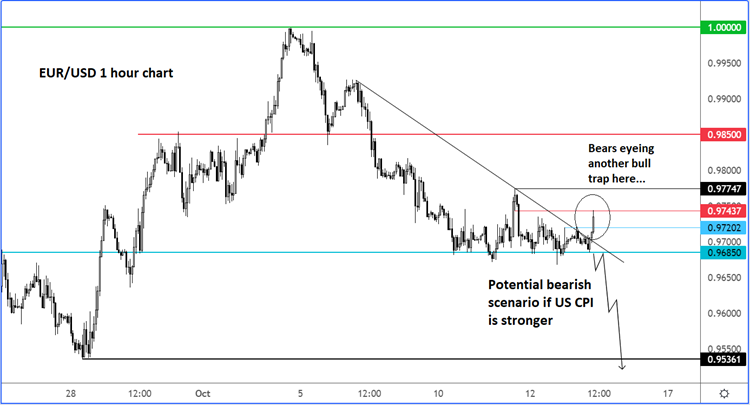 Remember that the long-term trend is bearish and so it is best to look for signs of a failure. If the bearish trend is re-claimed, then that could see the EUR/USD head back down to the recent lows circa 0.9536.