There was always going to be fireworks around Powell’s speech and so it proved last night. You already know what happened, but what caught my attention was the outsized rally on the stock markets, compared to everything else, with the dollar’s corresponding drop being – as it should have – more contained.

So, I was a bit surprised by the reaction of the stock markets and wonder if investors overreacted a little?

Powell’s comments were not too dissimilar to what most of his FOMC colleagues have been saying recently. You would have thought that the market may have priced in a 50-basis point rate hike for December by now given the generally less hawkish comments from many Fed officials, and CPI and a few other inflation pointers to back that. But the way the US indices rallied suggests that wasn’t the case. Perhaps the markets were not expecting the Fed Chair to explicitly imply that the FOMC will indeed hike by 50bps in December, a slowdown and thus a pivot from the recent 75bps hikes. Powell also said that the Fed doesn’t “want to overtighten, which is why we are slowing down,” but ruled out cutting rates soon.

Overall, his comments were more dovish than his previous speech, but the market should have expected this, is what I am trying to get at. Anyway, the important thing is always the market reaction from a trading point of view, than what x, y or z have said. After Wednesday’s Powell-inspired big moves, some sideways, choppy price action or consolidation should be expected now. But remember, anything can happen, so remain flexible to change your view on the market at any moment.

Interestingly, the S&P closed right at the bearish trend line that connects the previous highs seen this year. It comes in around 4075 to 4080. This is now the pivotal area for the market. Last week’s high is at 4042, which is also roughly where the 200-day moving average comes into play. The bulls will certainly want the market to hold above this area now. A decisive move below here would pave the way for a re-test of the support trend of the bull channel around 4985. 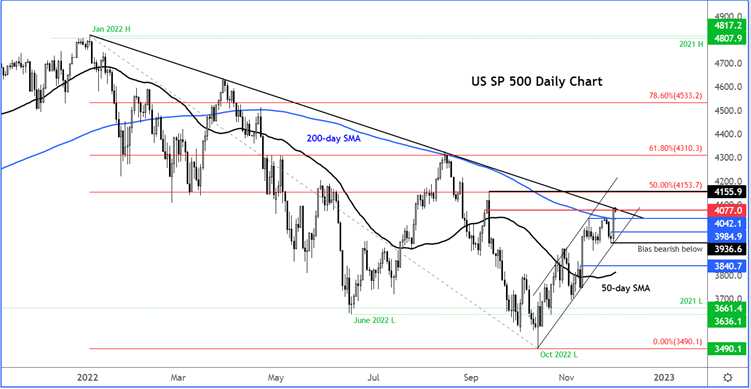 For as long as the S&P holds above any of these levels, the bulls will remain happy. The shallower the pullback, the better the odds of the market moving further higher.

The bears, meanwhile, will need to defend this bearish trend line and push the market back below the 200 day, if they want to keep this year’s bearish trend intact now that we are heading into the final month of the year. While aggressive bearish traders might be looking for trades around this trend line, the more conservative bears will want to see the breakdown of the bullish channel for confirmation now – especially in light of the big recovery. The 3936 level is now the line in the sand. A potential move below here in the coming days would invalidate the bullish trend of recent higher highs and higher lows.