The proximate catalyst for today’s big drop is a report that Goldman Sachs is pulling back on its plans to set up crypto trading desk, at least in the near term. The investment bank noted it wasn’t abandoning the space and would instead be prioritizing developing custody solutions, but the report nonetheless shattered the already-subdued sentiment among crypto bulls after a series of high-profile Bitcoin ETF rejections by the SEC in recent weeks.

Some observers have also noted that the popular anonymous crypto exchange ShapeShift announced that it will start requiring users to register for its service, potentially hurting the black market usability of cryptocurrencies, which remains one of the biggest present use cases for cryptocurrencies (along with speculation).

Regardless of the specific cause for the crypto selloff, it’s been extremely broad-based. Bitcoin, by far the largest cryptoasset, is falling by 6% as of writing, while so-called altcoins are under even greater selling pressure; the next four largest coins (Ether, XRP, Bitcoin Cash, and EOS) are all falling by more than 10%, with Ether hitting a 1-year low near $240 amidst its largest single-day selloff (-14%) since February!

Technically speaking, Bitcoin’s recent rally has reversed just ahead of its bearish trend line around $7500. With the world’s largest cryptocurrency now changing hands below $7000, there’s little in the way of support until the strong year-to-date support level around $6000. As we noted in our Q3 State of the Cryptoasset Market report, buyers need to see Bitcoin break definitively above the bearish trend line around $7500 before growing more sustainably bullish on the market as a whole. 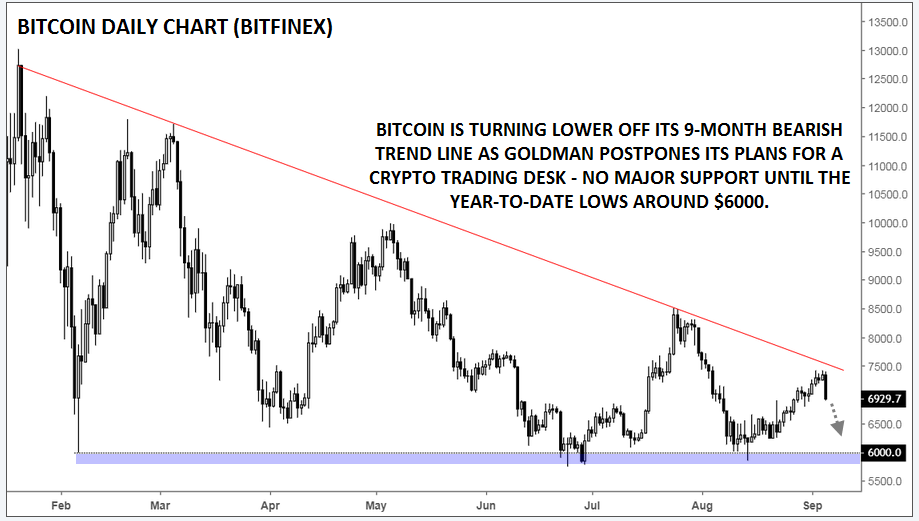