It wasn’t quite an “empty the clip” decision at ECB President Mario Draghi’s penultimate meeting, but the Italian has definitely made a dovish impression.

In its highly-anticipated policy meeting, the European Central Bank made a series of decisions to ease monetary policy and try to stimulate the Eurozone economy:

Many of these changes had already been “priced in” to the market, but the decision around QE is interesting. The €20B monthly pace of purchases was smaller than many analysts had anticipated, but the lack of an explicit termination date makes the announcement more dovish than expected. With inflation subdued, growth stalling and negative interest rates becoming entrenched, is the Eurozone turning into Japan? This is the fear of many traders and explains why the euro has fallen back below 1.10 in the wake of the release. 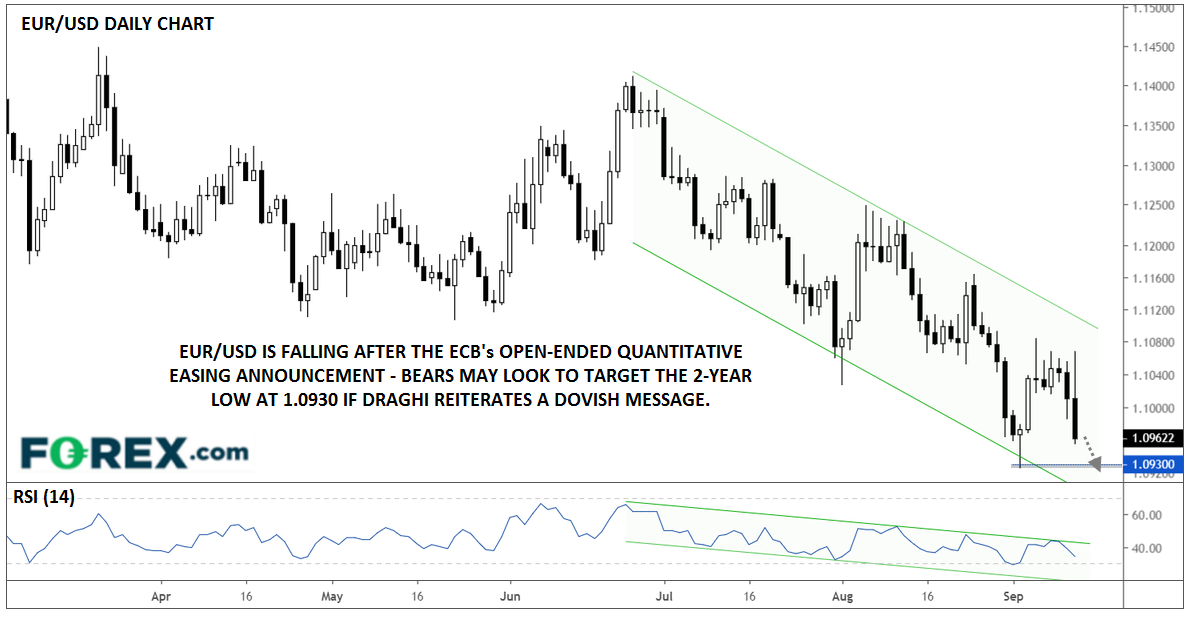 ECB President Mario Draghi is taking the stage for his press conference as we go to press, and traders will be watching closely to see how he characterizes the decision. Expect questions about the open-ended QE program and technical changes to QE rules to drive EUR/USD over the rest of the day. More dovish commentary could take the world’s most widely-traded currency pair down to test its 2-year low near 1.0930 next.

In other news, US President Trump has already chimed in on the decision. After calling Federal Reserve policymakers “boneheads” yesterday, the President tweeted that “European Central Bank, acting quickly, Cuts Rates 10 Basis Points. They are trying, and succeeding, in depreciating the Euro against the VERY strong Dollar, hurting U.S. exports.... And the Fed sits, and sits, and sits. They get paid to borrow money, while we are paying interest!” Needless to say, next week’s Federal Reserve meeting will be worth keeping a close eye on!