EUR/GBP’s Record Streak of Weekly Gains Set to End – Where to Next?

After 13 consecutive bullish weeks, EUR/GBP is poised to finish a week lower...

All good things must come to an end, as they say.

After 13 consecutive bullish weeks, EUR/GBP is poised to finish a week lower than the previous weeks’ close for the first time since the week beginning April 29. For all intents and purposes, this represents the longest weekly streak of gains or losses the pair has ever experienced (technically, our data shows a 13-week bearish streak on the pair back in Q1 1997, though because that period precedes the introduction of the euro itself, it uses imputed prices based on a basket of sovereign European currencies). From a fundamental perspective, this week’s soft economic data out of Germany (including an outright contraction in Q2 GDP) and the ongoing political turmoil in Italy trumped the latest Brexit wrangling, leading to the drop.

As the chart below shows, this streak has taken the single currency from below 0.8500 to a decade high above 0.9300 against its neighbor across the English Channel: 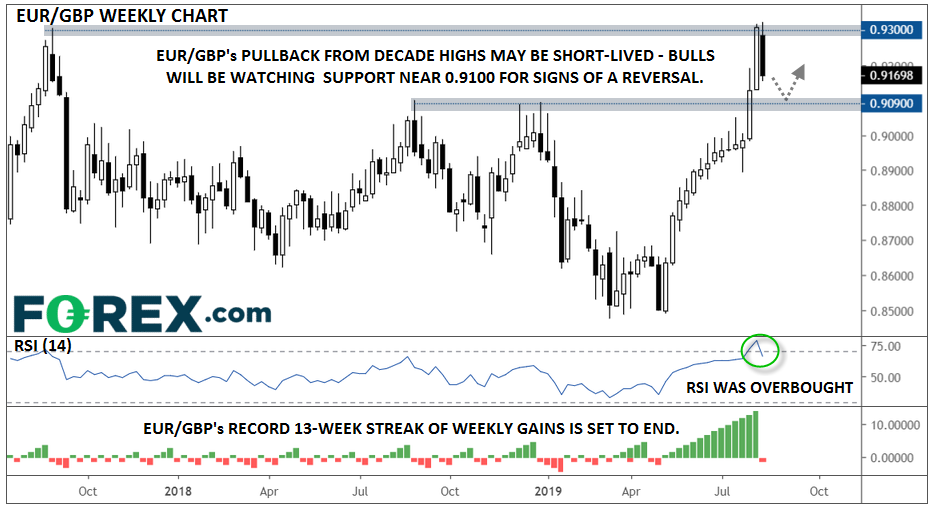 Not surprisingly, the pair’s weekly RSI indicator is deeply overbought, so the current pullback from previous resistance near 0.9300 is not unexpected. As my colleague Fiona noted earlier this week, support comes in at 0.9090, followed by 0.9050, while resistance looms up at 0.9324 and again at 0.9400.

Moving forward, there are causes for concern on both sides of the English Channel, but the urgency of Brexit (less than 75 days away at the start of the next week) may make the current pullback short-lived. Traders will be watching for signs of a bullish reversal if the pair tests previous-resistance-turned-support near 0.9100 next week.