Brexit is once again grabbing all the headlines, as my colleague Fawad Razaqzada highlighted earlier today. The situation remains highly fluid, and with everything from an agreed-upon withdrawal bill to a change in government on the table within the next 24 hours, GBP traders may want to stay on the sidelines in the short term.

Brexit is once again grabbing all the headlines, as my colleague Fawad Razaqzada highlighted earlier today. The situation remains highly fluid, and with everything from an agreed-upon withdrawal bill to a change in government on the table within the next 24 hours, GBP traders may want to stay on the sidelines in the short term.

One other major pair that’s in traders’ crosshairs at present is EUR/USD. After spending nearly six months in the 500-pip range between about 1.1300 and 1.1800, rates finally broke down to a fresh 18-month low yesterday. From a fundamental perspective, the dollar’s been supported by the general risk-off tone to markets over the last month, whereas the continued uncertainty around Italy’s budget has been weighing on the euro.

Moving forward, the key level to watch will be 1.1300. If the breakdown is legitimate, this broken support level should now provide resistance (and a potential area for momentum traders to look to sell the pair if they missed the initial breakdown). As long as that resistance level holds, bears will remain in control.

That said, a recovery back above 1.1300 could suggest that the world’s most widely-traded pair may have seen a “false breakdown” and could point to a quick short squeeze back toward the top of the recent bearish channel around 1.1400.

While everyone will be focused on every headline coming out of the UK tomorrow, EUR/USD may offer a clearer opportunity for technically-inclined traders! 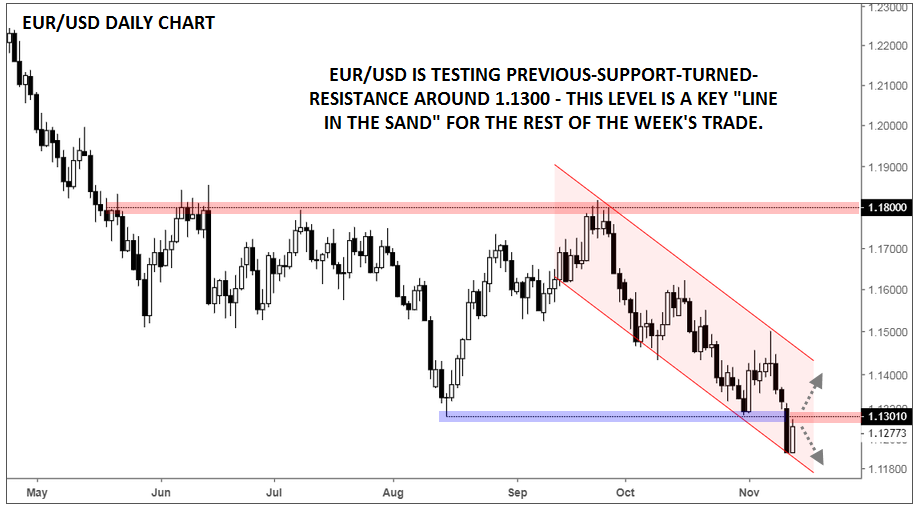