The minutes from each Federal Reserve meeting are released three weeks after the meeting itself, meaning that they’re generally stale under the best of circumstances...

The minutes from each Federal Reserve meeting are released three weeks after the meeting itself, meaning that they’re generally stale under the best of circumstances.

That sentiment is especially true this time around following the massive outbreak of volatility around the holiday period, when the S&P 500 fell 8% in the four days following the Fed’s December meeting…only to rally back 10% off those lows as of writing. In the interim, Fed Chairman Powell walked back his post-meeting comments, noting that the central bank will be “patient” in its approach to monetary policy, that there is “no preset path for raising rates” or adjusting the balance sheet, and that he was “listening very carefully” to markets.

Despite that disclaimer, today’s FOMC minutes still contained some valuable nuggets about the central bank’s plans heading into 2019 and beyond. Below are the major headlines from the minutes (emphasis mine):

In essence, the central bank is suggesting that monetary policy will be increasingly flexible and “data dependent” moving forward, in contrast to the relatively formulaic one-hike-per-quarter pace that we saw through 2018. Furthermore, the discussion around IOER and redemption pace suggests that the balance sheet winddown is not on “autopilot,” as many traders feared.

Given the tone of these minutes and recent policymaker comments, we can conclude that markets interpreted Fed Chairman Powell’s post-meeting press conference incorrectly; in other words, the “Powell Put” may still be in force, with the central bank remaining hyper conscious of market volatility when setting policy. The market tail continues to wag the Fed dog.

As of writing, the CME’s FedWatch tool shows that traders are pricing in an 85% chance that interest rates remain at or below current levels through the entire year, so the central bank (and the US economy more broadly) has plenty of work to do if we’re going to see much in the way of interest rate increases this year.

Risk appetite was saw a slight boost following the release of the minutes, with major US stock indices now trading back above pre-Fed-meeting levels. The S&P 500 is now testing a key level of previous-support-turned-resistance at 2600, which could determine whether the next 100 points are to the upside or downside heading into Q4 earnings season.

Meanwhile, the US dollar is still the worst-performing major currency on the day (see yesterday’s article, “US Dollar: Why 2019 Could Break Bulls’ Hearts” for more on the longer-term outlook for the greenback). 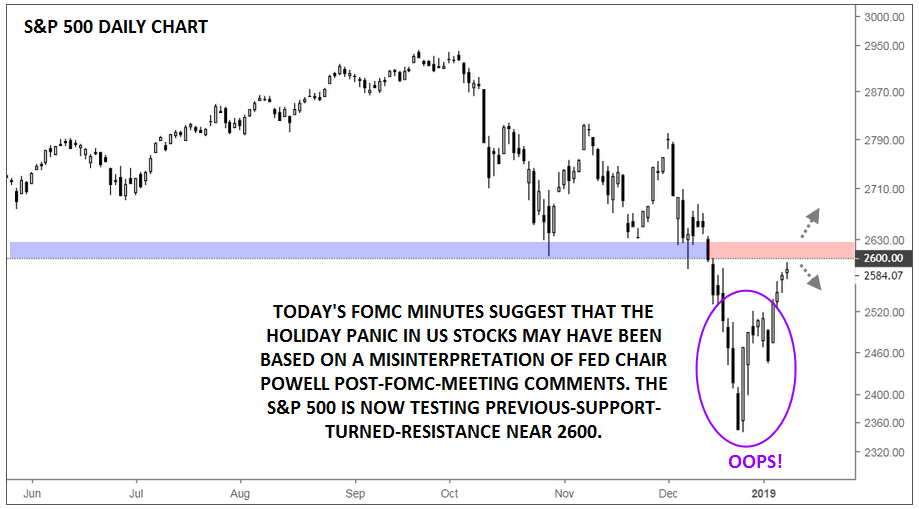