The price of gold is up for the fourth day, reaching its best level since 15th April. Given the corresponding sell-off in stock markets over the same period, gold’s positive response is almost entirely due to a rise in risk aversion, owing mainly to renewed concerns over US-China trade spat.

The price of gold is up for the fourth day, reaching its best level since 15th April. Given the corresponding sell-off in stock markets over the same period, gold’s positive response is almost entirely due to a rise in risk aversion, owing mainly to renewed concerns over US-China trade spat. Thus, the markets could be mostly in holding patterns ahead of the high stakes trade negotiations in Washington DC on Thursday. This week’s trade talks could therefore prove binary for gold and global sentiment in general. So, with that in mind, we don’t have too strong a view on the short-term direction of gold prices. But it is worth pointing out the fact that bond yields are falling again which is further good news for the precious metal as the lower yields boost the value of noninterest-bearing assets on a relative basis.

From a technical point of view, the yellow metal has formed a potential double bottom around $1266, although further bullish price action is needed to confirm this reversal pattern. After all, the metal is still below its corrective bearish trend having created a series of lower highs after it peaked at $1346 in February. Once a higher high is formed only then will the trend turn objectively bullish. It is important that the bulls manage to defend broken resistance levels such as $1285/6 now. Failure to do so could re-ignite renewed selling pressure that could eventually see gold break that double bottom low at $1266. 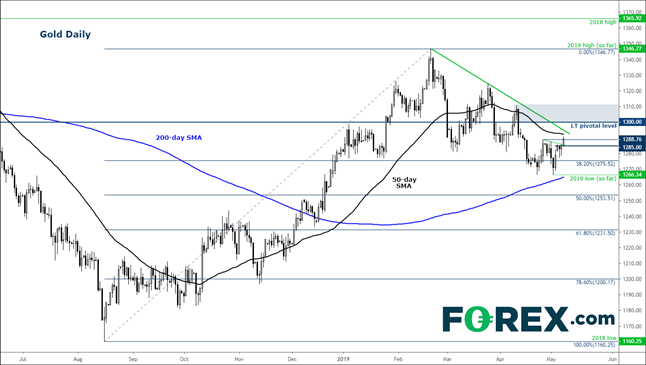