US and China are apparently close to a trade deal (how many times are we going to hear this?) that could lift most or all US tariffs – as long as Beijing follows through on its ledges. This is yet again providing the main boost for equities but sooner or later, investors will start focusing on something else.

Asian stock markets jumped overnight but closed off best levels, with European indices and US index futures also easing off highs. In FX, the US dollar remained generally bid with the euro being among the underperformers among G10 currencies at the time of writing. Gold and silver, which slumped on Friday, remained out of favour thanks to a stronger dollar and as government bond yields remained supported, reducing the appeal of low- and noninterest-bearing assets such as precious metals. But will it be a day of two halves? Before US investors come to play, here is a summary of news/data driving the markets so far today:

Amid the ongoing risk-positive headlines, the S&P 500 is now testing prior resistance in the 2814 region. As things stand, it looks like a breakout could be on the cards. If so, this could see the index push towards the next resistance at 2870 before possibly going for a re-test of the previous all-time high at 2941/2, hit last year. However, the positivity surrounding US-China trade talks may be close to being priced in, so we wouldn’t be surprised if the index were to ease back down from around this resistance area in the days ahead. Indeed, with the momentum indicator Relative Strength Index (RSI) being at the “overbought” levels of around 70, this suggests the trend may be in the exhaustion phase and that the bulls should proceed with extra care on new longs. However, the RSI is merely giving a warning sign and at this stage we have not seen a clear reversal stick on the daily time frame to suggest the bears are back. 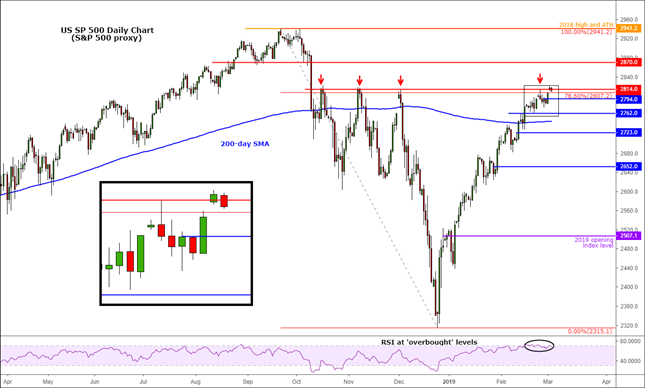