Stocks ease back after turnaround Tuesday

Yesterday’s rebound on Wall Street was so impressive that it even prompted Donald Trump to tweet: “Stock Market up 548 points today. Also, GREAT jobs numbers!”

Yesterday’s rebound on Wall Street was so impressive that it even prompted Donald Trump to tweet: “Stock Market up 548 points today. Also, GREAT jobs numbers!” The US President was obviously referring to the Dow Jones Industrial Average which closed up a good 2.2 percent and similar gains were seen for the other US stock averages. But has he jinxed it? Is it be a bit too early for stock market bulls to start celebrating? Was that just a dead-cat bounce? It is important to note that the markets have had a tendency over the years to turn around on a Tuesday, so that could have been a reason encouraging short-sellers to take profit and bulls to go “bargain hunting” yesterday. Anyway, there’s been little follow-through for the global indices following yesterday’s upsurge. In fact, Europe was mostly in the red and US index futures had given up their earlier gains and were pointing to a slightly weaker open on Wall Street, when this report was written. Meanwhile, 10-year US government bond yields were on the rise again, holding above that 3.13% support level which had been resistance back in May. If it was indeed worries about rising interest rates that caused last week’s sell-off then nothing has changed in this regard. So, it is possible that yesterday’s rally may quickly fade as we progress towards the latter half of the week. If this turns out to be the case then the safe haven Japanese yen could come back to life after weakening at the start of this week. However, as bearish as I might sound, it would take a brave man to bet against the US stock markets as so far every significant dip has been bought and this could well turn out to be another such example. Earnings are coming in thick and fast now and should we get more beats (like Netflix for example) than misses then this could be a reason to keep the bulls in the game for a while yet.

In any case, we are not convinced the buyers are in full control just yet and so wouldn’t be surprised whatsoever if the markets were to sell-off later on today or tomorrow. For us to turn bullish, we need to see further signs suggesting the buyers are well and truly back. The fact that the DJIA and other major US indices are back above their respective 200-day moving averages is a positive sign. However, given last week’s sharp sell-off, a short-term rebound from oversold levels was on the cards anyway. The technical damage that was caused by that brutal sell-off will take time to repair. Note for example how the initial rebound following the January sell-off faded and the markets went side-ways for several months as the bulls and bears battled it out. Eventually, the bulls came out on top and the Dow went on to hit new highs above the then all-time high of around 26705 that was hit in January. So it could take a while for the damage to be repaired. But on a side note, the fact that the bulls failed to hold the Dow up above the January high could be a major warning sign of bullish exhaustion. We have obviously broken back below that level and had a significant downside follow-through. Thus, any short-term rebound back into former support levels could get faded.

As our DJIA proxy shows, below, the index has now tested – and so far rejected – the first major hurdle between 25820 and 25955. This area had been pivotal for the Dow in the past and so it is very much possible it could resume its bearish trend from here. But should the bulls manage to reclaim this area then we could see the index climb all the way to the next potential resistance around 26330 before it decides on its next directional move. Meanwhile, short-term support comes in at 25485 – this being Monday’s high. If the index were to break decisively below this level then the bulls would get into trouble again. In this potential scenario, the bears may target the liquidity that will now be resting below last week’s low at 24896. 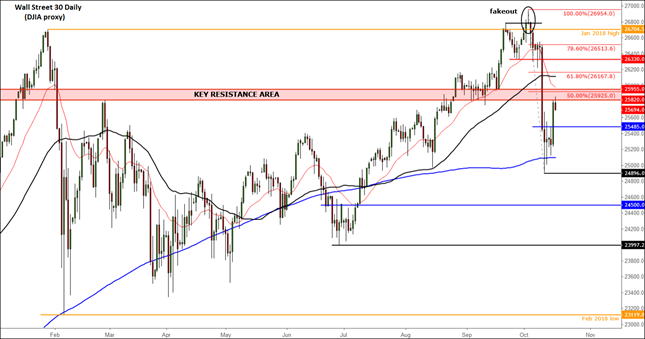