If the data continues to be as poor as retail sales, the USD/BRL could move higher.

On Wednesday, Brazil released its Retail Sales data for December.  The MoM number was -0.1% vs 0.4% expected and an upwardly revised 0.7% for November.  This was the first drop in retail sales for Brazil since April 2019.  In December, the Central Bank of Brazil cut rates by 50 bps and last week, cut another 25 bps to bring the key Selic rate to 4.25%.  The bank citied the global economic slowdown, uncertainties from the Coronavirus, and a slow domestic recovery.  Yesterday’s retail sales data only added to the evidence of the last point.

Not surprisingly, USD/BRL (and other EM currencies) has been trading higher in the wake of recent rate cuts, bringing the Real to all time lows.  However today price is trading near 4.3212, down over 0.75% on the day.  The pair paused at the 127.2% Fibonacci extension from the highs of mid-September 2018 to the lows of October 26th, 2018, near 4.3791.  In addition,  USD/BRL is running into an upper slowing trendline (acting as resistance) at that same level, going back to November 26th, 2018.  Although there are still a few hours left in the trading day, this resistance level has caused the pair to reverse and trade lower on the day, forming a bearish engulfing candlestick formation.  This reversal has allowed the RSI on a daily timeframe to move from overbought territory back into neutral territory.  If prices do move higher above the 4.3791 level, the next resistance isn’t until the 161.8% Fibonacci extension from the previously mentioned timeframe near 4.5954. 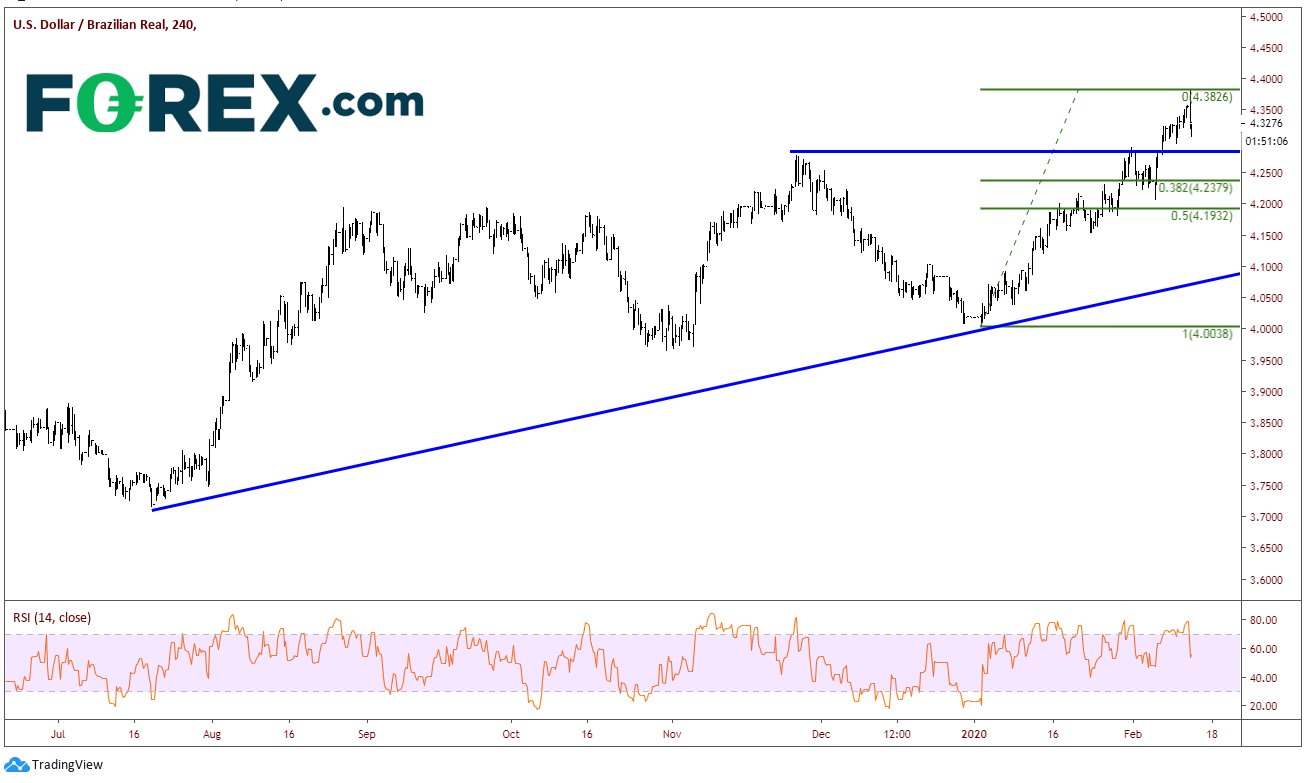 As USD/BRL pulls back from the overbought,127.2% extension level, keep in mind that the Central Bank of Brazil did say they would be data dependent moving forward.  However, if the data continues to be as poor as yesterday’s retail sales data, the USD/BRL could move higher, especially if it looks like they will cut rates again at their March 18th meeting.