The week ahead features interest rate decisions from two major central banks, as well as several potentially market-moving data from around the world.

The week ahead features interest rate decisions from two major central banks, as well as several potentially market-moving data from around the world. But after US President Donald Trump brought trade tensions back to the boiling point this week, sentiment is going to be heavily influenced by any trade-related headlines in the early parts of the week, with China already saying it will retaliate. Indeed, there was a possibility that the President would announce EU tariffs on Friday, in a speech scheduled for 18:45 (13:45 ET).

Besides trade wars, the somewhat disappointing US jobs report published on Friday has also increased the likelihood of another rate cut from the Fed. So, don’t be surprised if the dollar were to weaken further in early next week, especially against haven currencies such as the Japanese yen and gold.  But there will be plenty of global data that will move foreign currencies. Here are some of the data highlights:

US dollar could fall further

After the Fed’s latest rate cut, the market is now 98% sure we will see a follow-up cut in September, according to the CME’s FedWatch tool, despite the central bank giving out a not-so-dovish signal on Wednesday. As such, upcoming US (and global) economic data will be crucial over the next month and a half. Unfortunately, apart from the ISM non-manufacturing PMI on Monday, there isn’t a lot on the agenda in terms of US data next week. Still, the markets will be wondering whether the escalation in US-China trade dispute may increase the odds for further rate cuts anyway. The dollar has already fallen sharply since Trump tweeted about the additional tariffs. Indeed, according to Capital Economics, the tariffs are likely to cause a sharp slowdown in economic growth over the second half of the year, which is “another reason to expect the Fed to cut interest rates by a further 50bp by early 2020.”

As far as the two central banks are concerned, the Reserve Bank of New Zealand (RBNZ) is widely expected to cut rates 25 basis points to 1.25% from the current 1.50% rate. This wouldn’t come as major surprise, although to what degree the NZD will respond will depend almost entirely to the forward guidance. If the RBNZ signals further rate cuts might be on the horizon then the NZD could fall sharply, whereas if it signals that it is a one and done cut, then in this case the commodity dollar could respond positively, despite the expected rate cut.

There is less certainty as far as the Reserve Bank of Australia (RBA) is concerned, which cut rates to just 1.0% last month. The probability for another 25-basis point cut is around 50%. So, whatever the RBA does, there will be a group of market participants that will be disappointed/surprised. Therefore, the AUD could move sharply on the announcement.

With risk being off the menu and the potential for a RBA rate cut, the AUD/JPY could very well drop further during the week. But if the RBA decides against a rate cut, then a short squeeze could be on the cards on Tuesday. Still, the trend is bearish, so we favour fading the rallies. The first level of daily resistance comes in at 72.90 then there is nothing significant until 74.00-74.35 area. These levels were previously support. 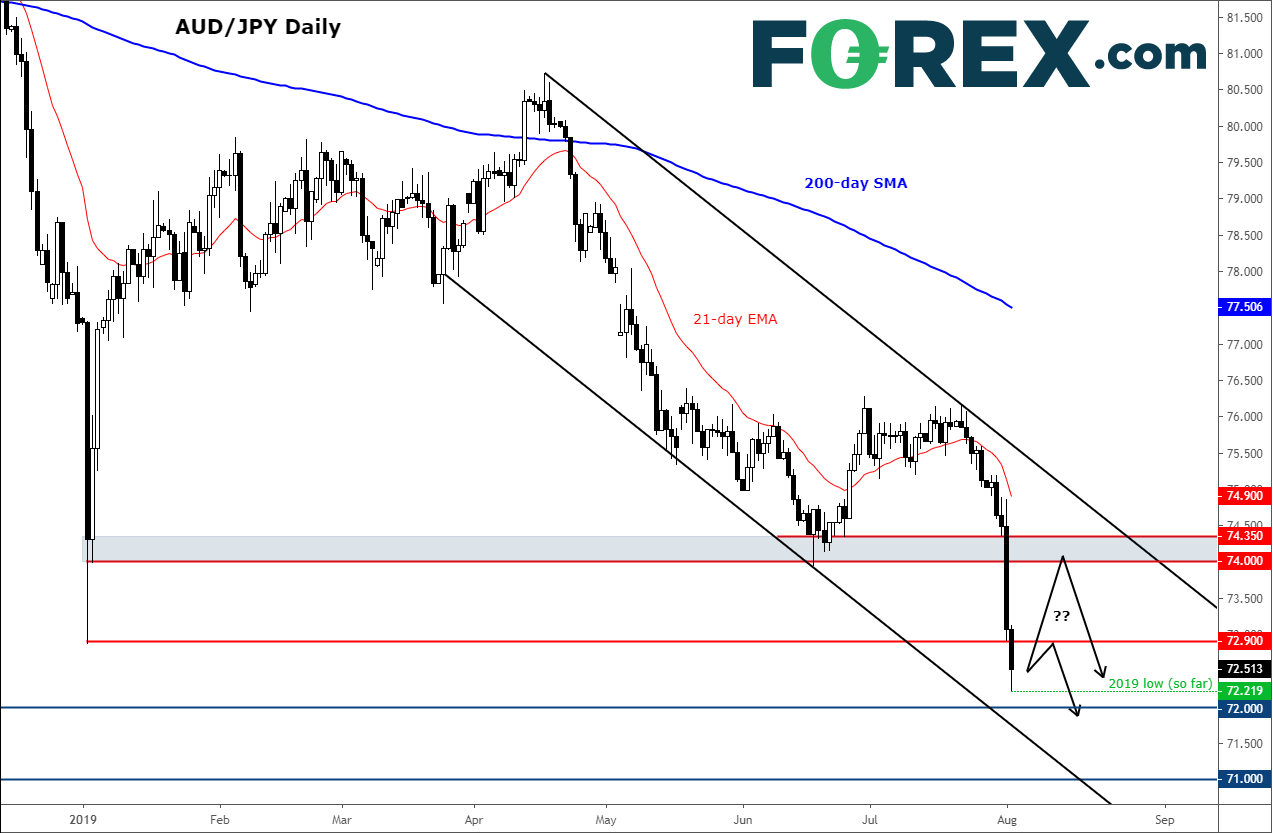