Oil prices rallied sharply this morning on reports that Saudi Arabia and Russia will make a joint statement at the G20 meeting; there was speculation that a freeze deal or something similar may be announced.

But as it turned out, the announcement was a bit of a damp squib. Russia and Saudi Arabia merely signed a joint agreement to establish a ‘working group’ in order to find ways to minimise volatility in the oil market, and there was no immediate plans to restrict crude output. What’s more, Saudi’s energy minister said that oil prices are improving and that freezing production is not the only solution.

So, uncertainty remains on the oil market ahead of this month’s unofficial meeting of the OPEC. They have talked the talk, now it is time to walk the walk. But judging by today’s events that is exactly what they are hopefully working towards with the largest oil producers finally taking some proactive steps in order to shore up oil prices.

From a technical standpoint, Brent oil remains contained inside converging trend lines, which basically means crude is in consolidation mode. The good news is a breakout is forthcoming in one or the other direction. With price action looking bullish on the higher time frames, a bullish breakout is what we are expecting to see in the coming weeks.

This can be confirmed by a sustained break above the bearish trend line and ideally above the $50.00-$50.85 resistance range.

However, if Brent moves below the bullish trend line then a deeper pullback will be likely before we see another leg higher at some point down the line. The key medium-term support range to watch is around the $42.00-42.50 level where the prior low meets the 200-day moving average. 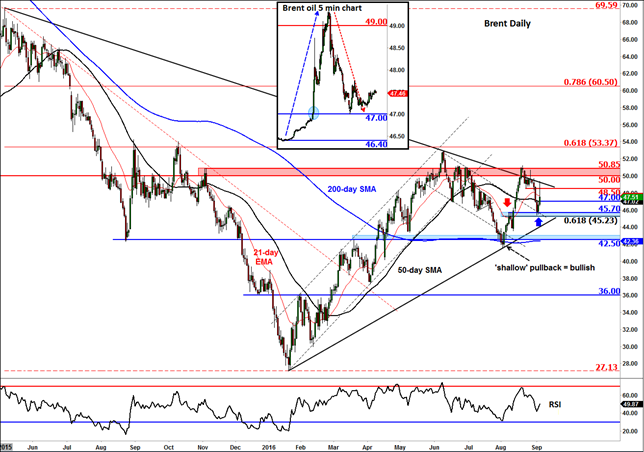