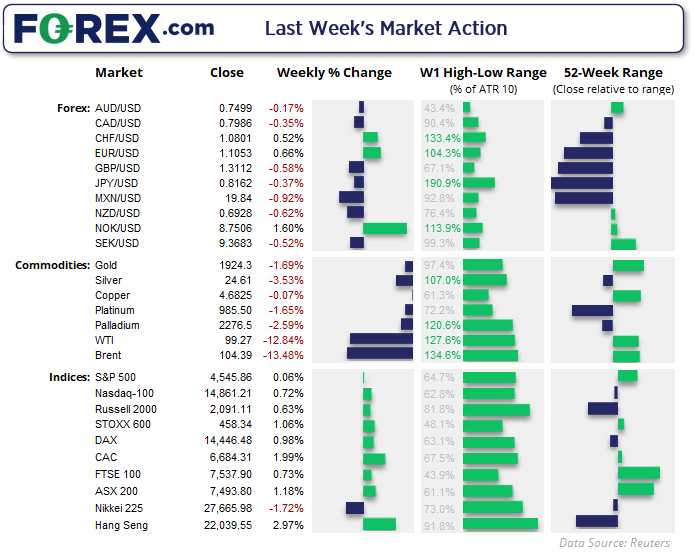 Wall Street posted minor gains last week after handing back the baulk of their initial gains over on Thursday, before recovering slightly into Friday’s close. Bearish hammers formed on the Nasdaq, Dow Jones and S&P 500 on the weekly chart which shows exhaustion at the highs on this timeframe. That we saw a rise in volumes on Thursday yet they had remained below average during the supposed rally raises an alarm for bull. As does the fact the S&P500 failed to hold above 4600 and the Nasdaq failed to hold above 15,000.

Trading exchanges in mainland China and Hong Kong are closed today and tomorrow for the China Meng Festival.

Commodities were broadly lower on Friday thanks to ongoing peace talks between Russia and Ukraine. The Thomson Reuters CRB index moved down to a 2-week low, brent futures stopped just shy of falling to $100 whilst brent closed at $99.27. However, we may see a reversal of some of these moves due to the weekend news flows.

Germany began indicating they may be willing to consider banning Russian gas in light of evidence of genocide in Ukraine. Their defence minister called for sanctions on Russia during a televised interview on Sunday, although the Economic Minister raid during a separate interview that whilst Germany was reducing its dependence on Russian oil, it could not wean itself off it right away. Separately, on Friday Germany have also said they may be able to ration power if the standoff continues.

EUR and CHF were the strongest major last week, although it was a volatile ride for bulls and bears and their gains only accounted for around a third of their weekly range. This means trading conditions were also choppy for currencies, along with indices and commodities. USD/JPY hit our 123 target, but only after it pulled back to 121 which was just above our invalidation point. However, a 3-week bullish reversal pattern called a morning star formation has formed.

Quiet calendar in Asia today ahead of RBA tomorrow

The Australian dollar is the strongest major currency so far in 2022. The RBA hold their monetary policy meeting tomorrow and markets have priced in a 30% chance of a hike, down from 36% chance last week. Markets having now priced in a cash rate of 1% by September, with the first hike to come in June, the RBA continue to push back on such an aggressive trajectory with the war in Ukraine adding a “new source of uncertainty” and floods in NSW and VIC are less than ideal. Given the overall strength of the Australian economy and the fact that fear of nuclear war has lessened to that of a month ago we should be on guard for a slightly less dovish RBA at tomorrow’s meeting.

Bullish wedge in play on AUD/JPY

AUD/JPY formed a bullish engulfing candle on Friday after finding support at its 10-day eMA on Thursday. It pulled back around -3.8% from last week’s high to low, so perhaps the corrective low is in place.

We can see on the hourly chart that prices have broken out of a falling wedge pattern, which projects a target at its 94.32 high. Prices are beneath the weekly pivot point so perhaps we’ll see a pullback today, but as long as it is a low volatility retracement we’re keen to explore bullish setups whilst prices hold above the 10-day eMA (orange line). A break above 92.33 assumes bullish continuation and brings 94 into focus, near the weekly R1 pivot and last week’s high.