With the US Dollar Index (DXY) falling for the fourth straight day, commodities, such as Gold and Silver, are getting a bid today. Not to be outdone, commodity currencies, such as the Aussie and the Kiwi, are also moving higher!  But it isn’t just vs the US Dollar.  These two currencies are forming bullish engulfing candlestick patterns vs the Yen on the daily timeframe.  With USD/JPY having pulled back in recent days, AUD/JPY and NZD/JPY are reaching their highest levels since 2015.  Will it continue?

On a daily timeframe, AUD/JPY has been moving higher since its March 2020 lows near 62.77.  However, on March 16th, the pair broke through resistance at 86.25 and the pair hasn’t looked back since.  Just eight trading days later, the pair reached a high of 94.32!  Over the last five months, the pair has continued to move higher in an ascending wedge formation.  The expectation is that price will break lower out of an ascending wedge.  However, AUD/JPY is trading in the middle of the wedge and has plenty of room to move higher before it reaches the top trendline.  Price is currently trading at its highest level since January 2015, just above 98.09.  First resistance is at the 127.2% Fibonacci extension from the high of June 8th to the lows of August 2nd near 98.61. Above there, price can move to horizontal resistance from December 2014 at 99.93, then the 161.8% Fibonacci extension from the previously mentioned timeframe at 100.81.  However, notice that the RSI is in overbought territory, an indication that the pair may be ready for a pullback.  First support is at the bottom trendline of the ascending wedge near 95.18.  Below there, AUD/JPY can fall all the way to the lows of August 2nd at 90.52, then then the previously mentioned horizontal support at 86.35. 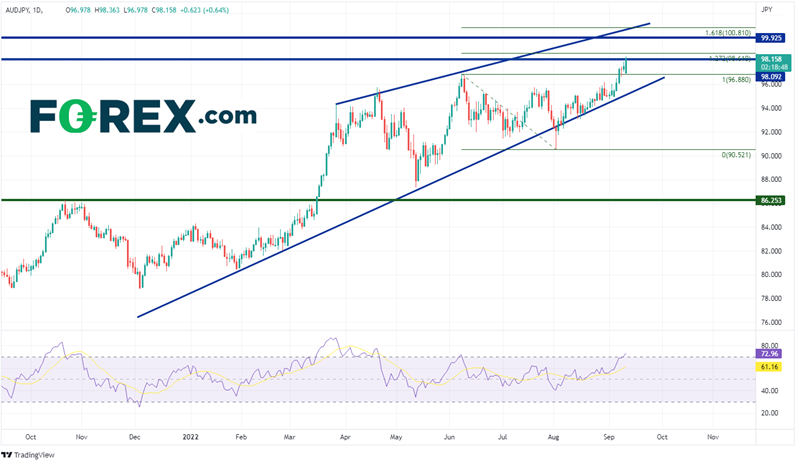 NZD/JPY has traded in a similar manner to AUD/JPY over the last 5 months. Although NZD/JPY had a nice couple of day in mid-March similar to that of AUD/JPY. It wasn’t until March 22nd that the pair broke through its previous high. On April 20th, NZD/JPY reached a high of 86.84 and pulled back aggressively to 79.45.  Since then, the pair has been moving higher in a rising triangle. On September 8th, NZD/JPY  finally took out the April highs.  With today’s bullish engulfing candlestick, the NZD/JPY traded to its highest level since  June 2015.  First resistance is at the high of June 2015 at 89.11.  Above there, resistance is at the 127.2% Fibonacci extension from the highs of April 20th to the lows of May 12th, at 89.49, and then the highs from the week of May 25th, 2015, at 89.95. First support is at the highs of August 12th, at 87.35.  Below there, price can fall to the rising trendline of the triangle near 83.75 and then the lows of August 2nd (and previous resistance) near 82.31. 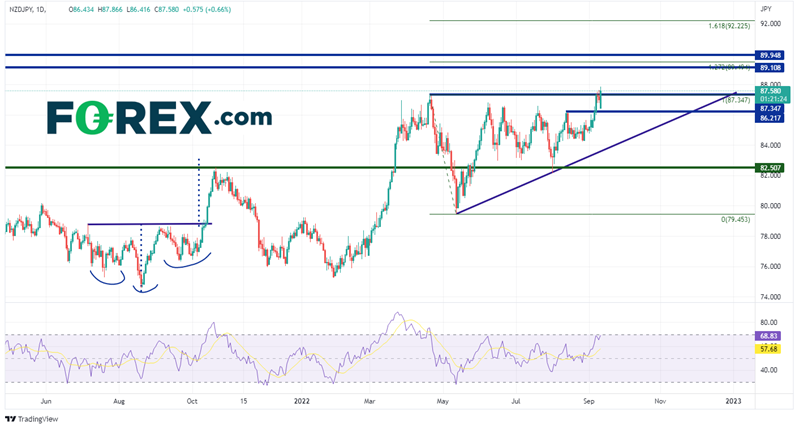 AUD/JPY and NZD/JPY formed bullish engulfing candles today, trading to their highest levels since 2015.  For the moment, it looks like there is room for them to continue to move higher.  However, if the Yen starts to strengthen or commodities begin to weaken (and therefore commodity currencies as well), the pairs could start to pull back.