Bank of Canada Preview: Will the BOC hike rates by 75bps?

When is the Bank of Canada meeting?

The Bank of Canada interest rate decision meeting will be held on Wednesday, October 26th, 2022 at 10:00 ET.  BOC Governor Macklem will follow with a press conference beginning at 11:00 ET.

What are traders expecting for the BOC Meeting?

Traders and economists are widely expecting the Bank of Canada to hike rates by 75bps to bring the overnight rate to 4% at Wednesdays meeting.

At its last meeting on September 7th, the Bank of Canada hiked rates by 75bps.  This was the fifth consecutive rate hike and it brought rates to 3.25%, the highest since 2008.  In addition, the BOC said that “given the outlook for inflation, the Governing Council still judges that the policy interest rate will need to rise further”.  The central bank also said it will continue with its quantitative tightening program.

Since then, Canada has had two inflation prints.  The August headline CPI dropped from 7.6% to 7%! However, the September reading only dropped to 6.9%, slightly higher than expectations.  The YoY core rate only fell from 6.1% in July to 6.0% in September as well. Although the headline print may have dropped 0.7% YoY in two months, the core rate has only dropped 0.1% YoY. BOC Governor Macklem spoke between the inflation readings and noted that further interest rate increases are warranted to tame inflation.  The markets took these comments as hawkish.  In addition, the September Unemployment Rate dropped from 5.4% in August to 5.2%.  This should give the BOC confidence to hike 75bps.

USD/CAD had been moving in an upward sloping channel since early April.  On September 21st, the pair broke above the top, upward sloping trendline near 1.3400 and continued higher.  USD/CAD reached a high of 1.3978 on October 13th, as the RSI and price diverged.  Since then, the pair has pulled back slightly and is currently trading near 1.3700. 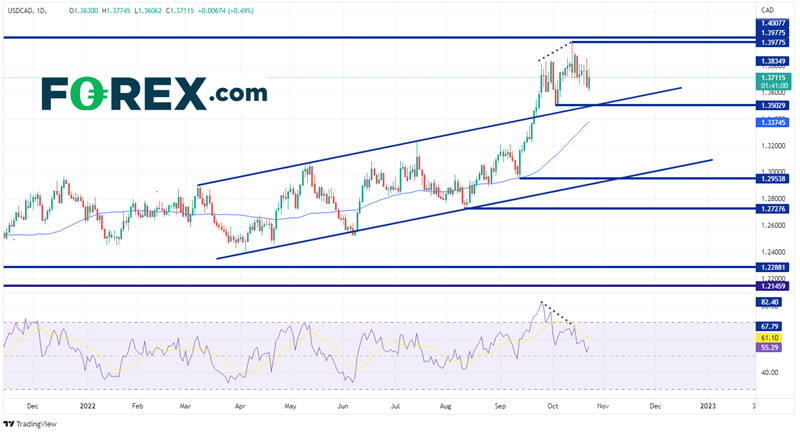 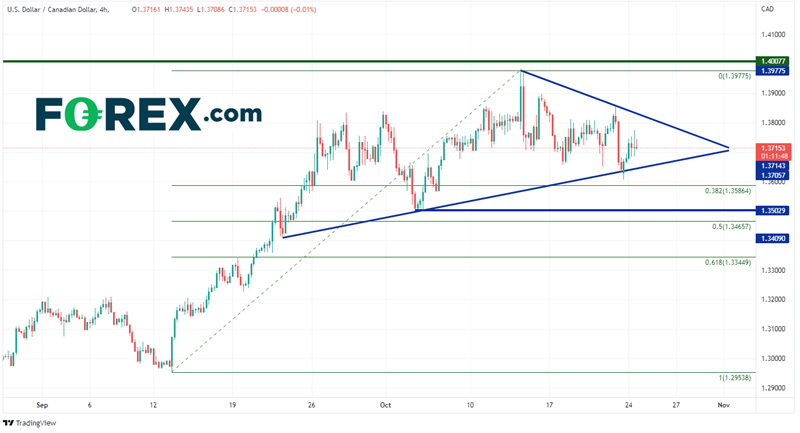 With the Bank of Canada meeting on Wednesday, expectations are priced in that the BOC will hike rates by 75bps.  As a result, USD/CAD is moving to the center of its recent range.  The key will be to watch the statement and guidance and try to determine if the Bank of Canada is ready to pivot and begin slowing the pace of rate increases!