…But there’s hope for GBP/USD bulls – the dollar and bond yields are weakening again.

The pound slumped after the Bank of England provided a very grim forecast on growth and predicted inflation would hit double-digits, as it raised interest rates by 50 basis points to 1.75% as had been expected. The GBP/USD slid below the 1.21 handle in response, before rebounding slightly as the US dollar fell across the board on the back of some soft US jobs data ahead of the release of the July non-farm payrolls report on Friday. Other pound crosses remained near the session lows as we transitioned to the start of US session.

Why did the pound fall so sharply initially?

Well, two reasons. First, the BoE predicted 5 quarters of recession – no less! This on its own would be very negative on any day. Whether the BoE will prove to be correct is a topic for discussion another day. But it thinks the UK economy will shrink by more than 2% in total between Q3 and early 2024. What’s more, the Bank of England didn’t want to buck the trend of providing no forward guidance after the RBA also chose to go down this path earlier this week.

How BoE's forecasts compare to May

While the BoE has been quite bearish in its forecast on the economy, predicting a recession lasting for more than a year, and anticipating that inflation will rise to above 13%, they UK central bank’s track record has been quite poor. On top of this, the markets have already discounted much of the negative news. So, I would not be surprised if we see the pound go down only a little bit from here, before potentially rebounding.

What to expect for September?

Well, BoE Governor Bailey mentioned that there are no guarantees for another 50 bps hike in September at his press conference. But there was only on dissenter on the decision at this meeting, which means most MPC officials are happy to act more forcefully to fight inflation. So, I would think the BoE is going to hike by another 50 basis points in September, unless something changes dramatically in the interim.

Can a weak dollar save GBP/USD?

As mentioned previously, the dollar has been having a difficult time of late owing to concerns about a slowing economy and peak inflation. Today we saw further evidence of that as jobless claims hit fresh 8-month highs, while continuing claims hit their highest level since March. The weekly unemployment data has raised concerns that the July non-farm payrolls report will disappoint expectations on Friday. Earlier in the week, we saw purchasing managers reported employment contracted in July, but at a slower pace than June. Meanwhile, the closely-followed University of Michigan Consumer Sentiment survey has remained near all-time lows, while the official Consumer Confidence barometer is at a 5-year low.

Against this backdrop, I wouldn’t bet against the pound to rise from the ashes, against all odds. I certainly think that the downside risks are mostly priced in for GBP/USD in any case. This means that the next big move could be to the upside. 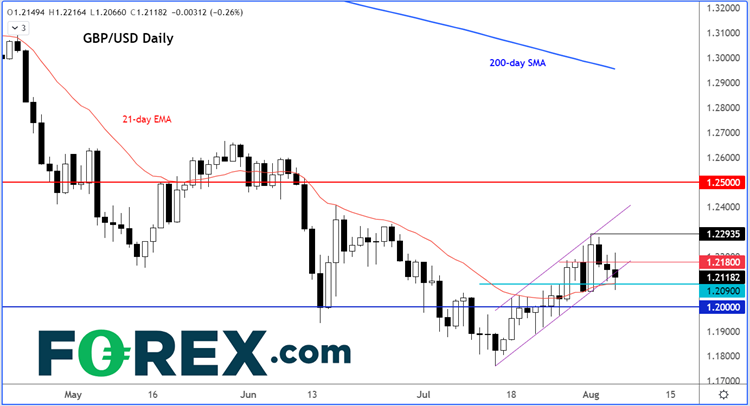