Bottom Drops Out for US Stocks

It seems like just yesterday that we writing about how it was “All Systems Go” for the S&P 500 heading into earnings season (in actuality, it was just last week). While we had softened our tone as the price action deteriorated (see here and here for examples), the ferocity of today’s selloff is something that few traders saw coming.

As of writing, the widely-followed Dow Jones Industrial Average is falling by more than 600 points to trade back below 26,000, while the S&P sheds nearly 70 points and the Nasdaq is trading off by a full 200 points. All three major US indices are down more than 2% on the day. The DJIA is on track for its fifth-straight bearish day, which would mark the longest losing streak since November 2016.

The proximate catalyst for today’s brutal selloff is difficult to pin down, though some commentators have pointed to the continued march higher in bond yields, signaling rising borrowing costs and an increasingly attractive investment alternative to equities. Interestingly, this has not resulted in a classic “risk off” trading environment, as gold is trading essentially flat on the day and safe haven currencies like the yen, Swiss franc, and US dollar are trading mixed.

Regardless of the fundamental explanation, it’s clear that we’re seeing significant technical damage on both an individual stock and broader index basis today. The S&P 500 is putting the finishing touches on a large “bearish marubozu” candle, signaling strong selling pressure throughout the day and suggesting we could see a bearish continuation in the coming days. The index has clearly broken its bullish channel off the April lows, opening the door for a deeper drop toward the Fibonacci retracements of the 6-month rally at 2793 (38.2%), 2748 (50%), and 2702 (61.8%). 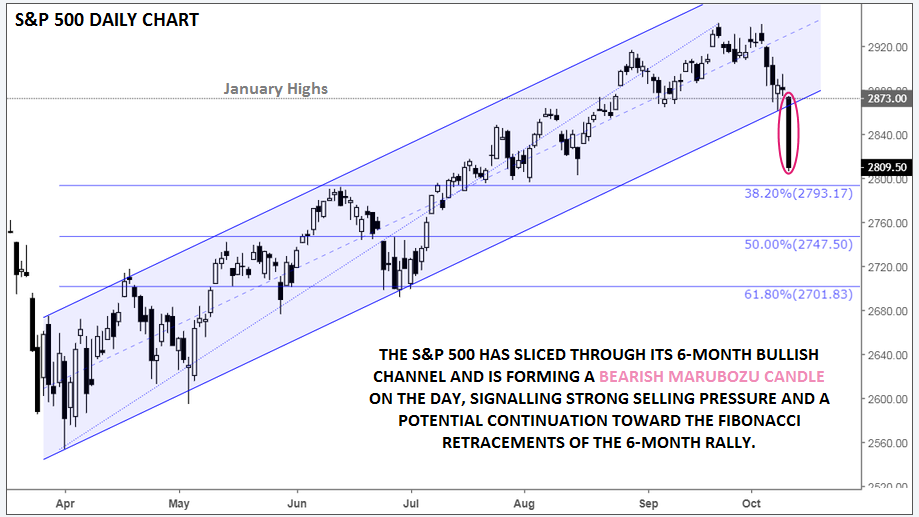