EUR/JPY in focus ahead of ECB decision

By :
Fawad Razaqzada
,  Market Analyst
Given the uncertainty over whether the European Central Bank will opt for a 25- or 50-basis point hike today, the euro should move sharply. Markets are currently pricing in 38bp of tightening for today, which is bang in the middle of 25 and 50bp hike. The chances of a larger hike have risen. Reports this week suggested a 50bp hike was being seriously considered by the Governing Council. The recent weakness of the euro also means the eurozone is importing more inflation than would be the case had the single currency been stronger. This will encourage the hawks to push for a 50 bp hike, but will they manage to encourage the doves to join them in a more aggressive move? The ECB rate decision is due at 13:15 BST (08:15 EDT) with the press conference taking place at 13:45 BST. You can read our full preview HERE.

EUR/JPY could target 145.00 if ECB is aggressive

While I think the ECB will raise rates by 50 bps today, I obviously cannot rule out the possibility of a dovish 25bp hike, which leaves the euro vulnerable to some correction. In any case, the EUR/USD may not receive much sustained support even in a 50bp hike scenario, thanks to a weak macro-outlook.

But against the yen, the single currency has the best chance of making some solid ground against. 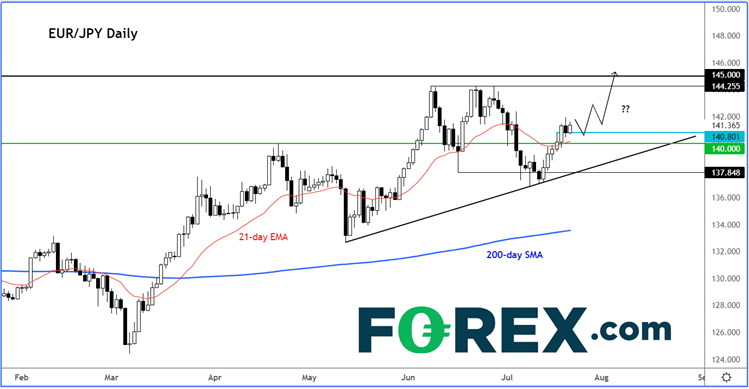 The EUR/JPY remains our favourite euro pair for potential appreciation, given that the Bank of Japan (BOJ) again refused to deliver any hawkish surprises at its policy announcement overnight. The BOJ reiterated that economic growth is more important than yen weakness, which should keep the pressure on the currency in the weeks and months ahead, especially if sentiment across the financial markets stabilises further.

Thus, if the ECB were to deliver a 50 bp hike today, I would imagine the EUR/JPY would find renewed buying interest as the disparity between Japan and Eurozone monetary policies grow larger.

If, however, the ECB delivers a dovish surprise, then I would focus on looking for short setups emerging on the EUR/USD than EUR/JPY, given the ongoing dollar strength.