After teasing us for several days, the wait is finally over! The EUR/USD has just hit parity (1.00) amid fears of a Russian gas shutdown, rising hawkish bets on the Fed and downbeat risk sentiment. The final nail in the euro’s coffin was news of a considerable deterioration in the German economic outlook, according to the closely-watched ZEW survey. It printed -53.8 for July, much weaker than -38.3 expected and -27.6 last. 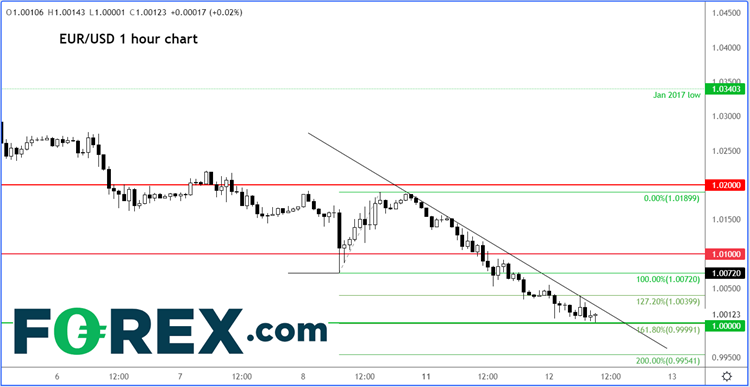 What happens now, and where do we go from here?

The fact that the EUR/USD has just broken parity after a slow grind lower, rather than a sudden move, means there’s consistent and continued selling of the euro and buying of dollar, rather than some sort of market manipulation. It is a fundamentally-driven move. All the macro reasons we have been talking about over the last several weeks and months have not changed to tempt the buyers to step in just yet.

Given the historical and psychological importance of this level, we may initially see some wild price movements on the lower time frames. But if there’s acceptance below 1.0000 then it is anyone’s guess how far it could fall before stabilising.

Indeed, psychological levels play a major role in FX. Policymakers at the ECB and elsewhere would also be watching such big levels.

Don’t forget the role of the FX options market, where a lot of strike prices are based around such key levels. A break of parity could trigger option strategies that requires selling huge volumes of EUR/USD.

It may also trigger stop loss orders of those who were trying to catch the bottom of the EUR/USD but had 1.000 as the line in the sand, or perhaps some distance below it. With this level now broken, those speculative positions might have to be liquidated, thus adding further pressure on the exchange rate.

Possibility we may see the EUR/USD bottom out

Beyond the short-term movements, the direction of the EUR/USD will pretty much be driven by fundamental news. Unless something changes fundamentally, the bearish trend will remain intact even if we see some short-covering bounces here and there. But sometimes, the markets bottom out before the positive news comes out or the flow of positive news starts. This could be the case for the EUR/USD, especially given how negative sentiment is towards it right now.

So, for those looking for a possibility of a bottom on the EUR/USD, watch out for a brief break down of the parity level and then a quick recovery, followed by the formation of some nice bullish-looking daily candle pattern.

I have seen some major reversals take place around big levels in the past and the 1.000 level on this pair is no different. What I would like to see from a bullish point of view is an initial sharp breakdown below parity, and then an equally strong recovery to take rates quickly back above this level. If we see such a scenario – a false break down – then traders might start piling in on the long side. We could see speculators build large, long, positions in the subsequent days, using the most recent low as their invalidation point.