The European Central Bank hiked interest rates by 50bps to bring the deposit rate to 2%.  This comes after 2 consecutive interest rate hikes of 75bps, though Christine Lagarde said that this is by no means a “pivot”.  The central bank also indicated that there will be more interest rate increases to follow, at a measured pace, as inflation forecasts were revised higher.  The ECB now sees inflation for 2022 at 8.4% vs a previous forecast of 8.1%.  In addition, the 2023 forecast for inflation is now forecast to be 6.3%.  The ECB also mentioned that it will begin QT in March at a pace of 15 billion Euros per month.  However, the most surprising news was during the press conference when Christine Lagarde said that it’s “obvious” that we should expect 50bps hikes for a period of time. Lagarde also said that the ECB needs to do more on rates than markets are pricing in. As a result, the Euro went bid against most currencies (however it later pared gains vs the US Dollar).

On the other side of the coin is the Reserve Bank of Australia.  Last week, the RBA hiked rates by 25bps, as expected, to bring the cash rate to 3.10%.  The RBA statement said that more hikes are expected as inflation is too high. They expect inflation to peak around 8% this year and “a little above” 3% in 2023.  However, although the RBA meets more often than many of its central bank peers, the markets are not pricing in another interest rate hike until April 2023. Therefore, the Australia Dollar has been weaker than other major currencies. Other central banks are expected to be much more aggressive when hiking rates compared to the RBA.

As a result of hawkishness from the ECB and the “less hawkish” comments from the RBA, EUR/AUD has gone bid.  On a daily timeframe, EUR/AUD made a high print for the year of 1.6226 on February 4th.  The pair then traded aggressively lower and reached 1.4320 by April 5th.  After bouncing throughout the summer to 1.5398, the pair fell again and tested the previous lows on August 25th, setting up a potential double bottom.  The EUR/AUD bounced once again and took out the April 5th highs on October 10th near 1.5397.  The breakout set up a target for the double bottom near 1.6550.  After breaking out, the EUR/AUD consolidated in a flag formation as the pair waited for its next catalyst to move hiker.  The aggressive ECB on Thursday seems like that may have been it. 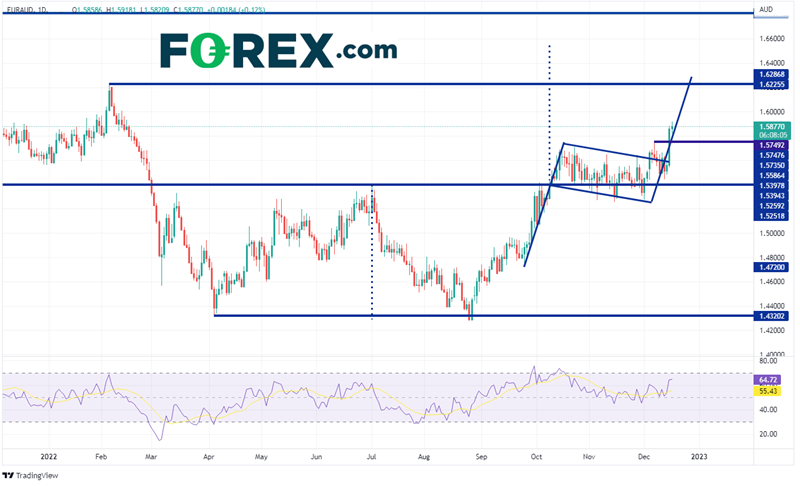 On a 240-minute timeframe, EUR/AUD has formed a flag pattern near the breakout point of the double bottom.  However, after Thursday’s hawkish ECB meeting, the pair broke aggressively higher and is on its way to the double bottom target.  In order to get there, it must first pass through horizontal resistance at 1.6069, then the year’s high at 1.6226. The target for flag formation is just above there, near 1.6280.  However, if EUR/AUD fails to continue to move higher, the first support level is at the December 7th highs of 1.5749.  Below there, price can fall to the top trendline of the flag near 1.5570, then the double bottom breakout level of 1.5397. After the hawkish ECB meeting, the Euro went bid, including versus the Australia Dollar. With a double bottom target and a flag target above, the pair still has some work to do.  If the RBA Minutes next week are dovish, watch for the pair to continue to move higher!