The Bank of Canada are expected to hike interest rates by 25bp tomorrow according to market pricing and economists. The hike would see their benchmark rate rise to 4.5% - its highest level since October 2007 – and on par with the Fed yet above the RBNZ’s 4.25% rate. A 25bp hike would be the slowest pace since their first hike of this cycle in March 2022, after which they moved up 50bp increments, a 100bp hike and a 75bp hike along the way. The central bank will also provide minutes from the meeting on February the 8th, which is the first time in their history. 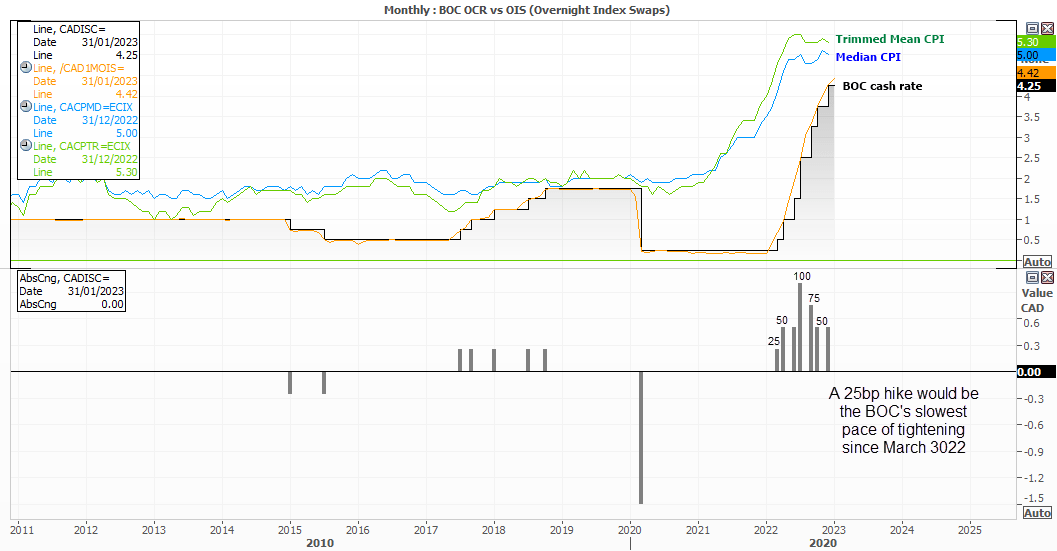 Money markets suggest an 80% chance of a 25bp hike, whilst 25 of 26 economists polled by Reuters (96%) also anticipate the move. With a 25bp hike all but a given, it could take a surprise hold to prompt volatility for traders. But then looking through the latest business and consumer sentiment surveys suggest we could be fast approaching the BOC’s terminal rate. So traders should also be on guard for a potential dovish hike, where the BOC may hint that they’re nearing the end of their tightening cycle. And that could spell further weakness for the Canadian dollar.

The BOC pay close attention to their quarterly business and consumer outlook surveys, and the general trend across both is a concern of high inflation weighing on their outlook for the economy. So on that front the rate hikes are doing their job to cool the economy by lowering demand.

However, with inflation remaining stubbornly high and both Trimmed Mean and Median CPI hovering near their multi-decade highs and nearly twice the upper bound of their 1-3% target range, it leaves the potential for at least 1 or 2 more 25b hikes.

With the BOE making increasingly hawkish comment and the BOC likely nearing the end of their tightening cycle, GBP has risen over the past two weeks. Yet prices have also pulled back the past two days and we’re waiting to see if the cross can hold above support around 1.6445, which comprises of previous highs, the monthly pivot point and the 20-day EMA. 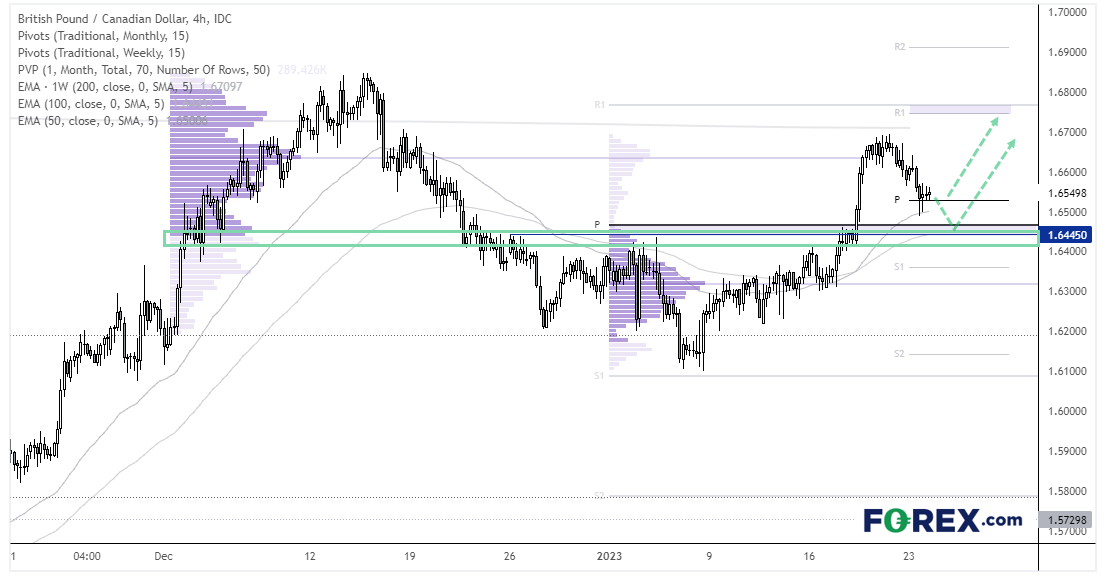 The 4-hour chart shows a lower wicks and a Doji respected the 20-bar EMA, so perhaps prices are trying to form a low. The bias remains bullish above 1.6400, so bulls could either seek to enter around current levels (if confident a low is near), or wait to see if prices pull back to the 1.6450 resistance level – then seek evidence of a swing low.

Take not that the 200-week EMA resides around 1.6700 and makes a likely resistance level. But for now the bias is for an eventual break above it, based on the strength of the bullish trend on the daily chart overall.

Latest Research
US open: Stocks plunge after NFP report smashes expectations
Gold down but not out as traders eye NFP
China’s economy is expanding again, according to official data (USD/CNH)
Four guys walk into a bar before central bank meetings…….
ECB hikes 50bps, as expected. Another 50bps hike to come in March
The top 10 most traded currencies