Yesterday, we highlighted the upcoming BOJ meeting and its possible impact on GBP/JPY (see “Will the BOJ Bring a Trick or a Treat for GBP/JPY?”), but NZD/JPY is also at an critical technical juncture.

The pair has been in a prolonged downtrend since peaking in late January, losing nearly 1,000 pips over that timeframe. That said, rates have now found support off the 72.25 area on four separate occasions in the last 10 weeks, suggesting that the longer-term downtrend may be at risk of reversing.

Meanwhile, the RSI indicator is showing a triple bullish divergence with price, signaling that the selling pressure has been receding on each retest of support. With the kiwi trailing only the Aussie and the yen among the weakest major currencies so far in today’s price action, the top of the bearish channel could be under threat as soon as this week.

What bullish readers should watch for is a daily (and ideally weekly) close above the established channel to signal a possible bottom. Above that area, the next hurdle will be the late September / early October highs around 75.50. Of course, signs of a reversal off the top of the channel could foreshadow a fifth test of support near 72.25, so traders will want to keep a close eye on the price action over through the rest of the week. 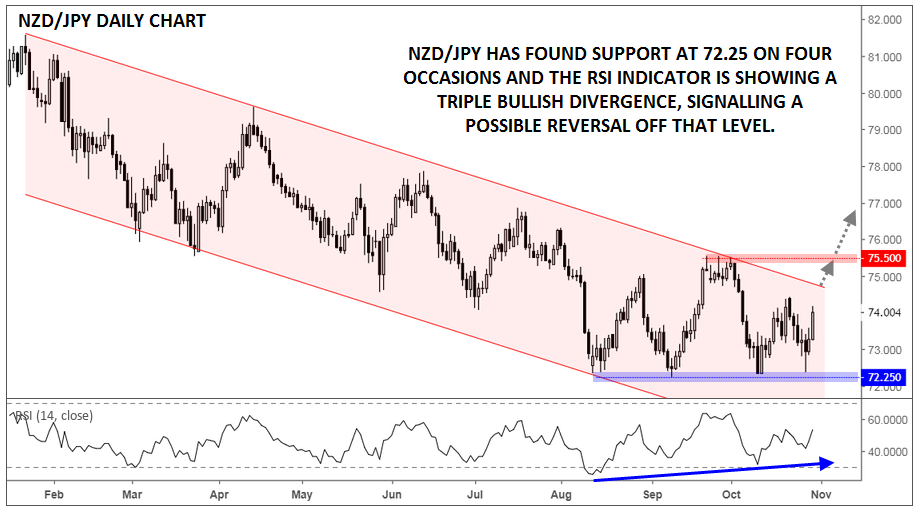