OPEC+ has agreed to increase output by 648,000 bpd in July and August vs and expectation of 632,000 bpd.  However, markets may have been looking for a larger increase as earlier in the day, the FT reported that Saudi Arabia had indicated to Western Allies that it is prepared to raise oil production.  In addition, yesterday rumors were swirling that some OPEC nations were considering suspending Russia from OPEC+, which would allow them to increase output of their own.  However, there was no mention of this from today’s meeting.  The reason for the increase in oil production output today, albeit small, was that OPEC decided to take the increase expected for September and divide it over July in August.

Crude Oil reached its highest level since 2008 on March 8th near 129.42 and pulled back to the 50% retracement level from the lows on December 2nd, 2021 to the highs of March 8th, near 95.94.  Since then, crude had been moving higher once again.  On Tuesday, WTI Crude oil reached its highest level since March 9th, near 119.96, though it has been pulling back on rumors of Russia’s suspension and a possible increase in production from Saudi Arabia. 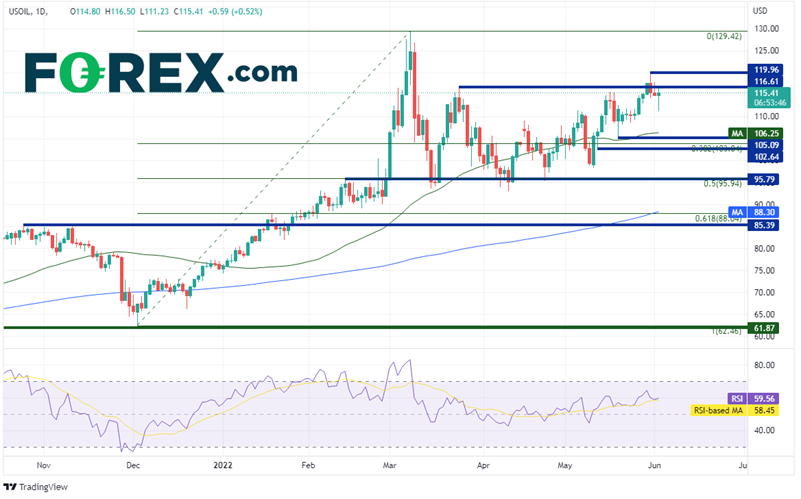 On a 240-minute timeframe, since making the near-term lows on April 11th, price has been moving higher in an ascending wedge formation.  However, as crude oil approached the apex yesterday, price fell below the rising, bottom trendline of the wedge.  The target for the break of an ascending wedge is a 100% retracement, or near 98.18.  However, if price is to get there, it must first pass through today’s low at 111.19, then the 50 Day Moving Average at 106.25 (see daily).  If price continues lower, the next level of horizontal support is at 111.19. If price is to break above current levels, near 116.00, resistance is at the bottom trendline of the wedge. The next resistance level is the high from Tuesday at 119.86, then the top trendline of the wedge near 122.75.  Above there, price can run to the March 8th high at 129.42. 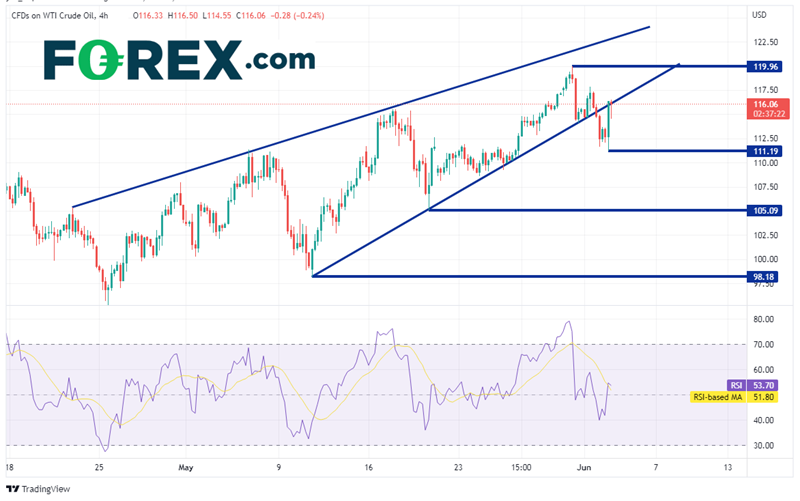 OPEC+ increased production by 648,000 bpd.  However, the rumors are still making the rounds that OPEC+ may suspend Russia and that Saudi Arabia may increase production as price continues to soar.  If the rumor turns out to be true, price could fall aggressively.  If they are not true, price may continue to rise until demand subsides.  Watch the headlines!