As April housing data winds down, the New Homes Sales print was ugly at -16.6% MoM.  Expectations were for -1% MoM vs -10.5% MoM in March.  The actual number of 591,000, seasonally adjusted, was the lowest reading for new home sales since April 2020 and well below the expectations of 750,000.  This follows last week’s print of Existing Home Sales, which was down -2.4% in April.  The actual seasonally adjusted rate was 5,610,000, the lowest level since June 2020.  Tomorrow the US will release the MBA 30-Year Mortgage Rate for the Week of May 20th.  Last week the rate was 5.49%.  Recall that as recently as February, mortgage rates were below 3.5%.  The quick, large increase in mortgage rates is one of the main factors that has led to lower home sales.

On the back of poor housing data, a risk-off move ensued, and USD/JPY was on the move lower. The pair had been rising until recently, from a low of 114.65 on March 4th to a high of 131.25 on May 9th!  However, since then, USD/JPY has been pulling back, thus forming a Head and Shoulders pattern.  With today’s move lower of 130 pips, USD/JPY broke through the neckline of the pattern and is on its way towards the target.  The target for a Head and Shoulders pattern is the height from the head to the neckline, added to the breakdown point.  In this case the target is near 123.70. 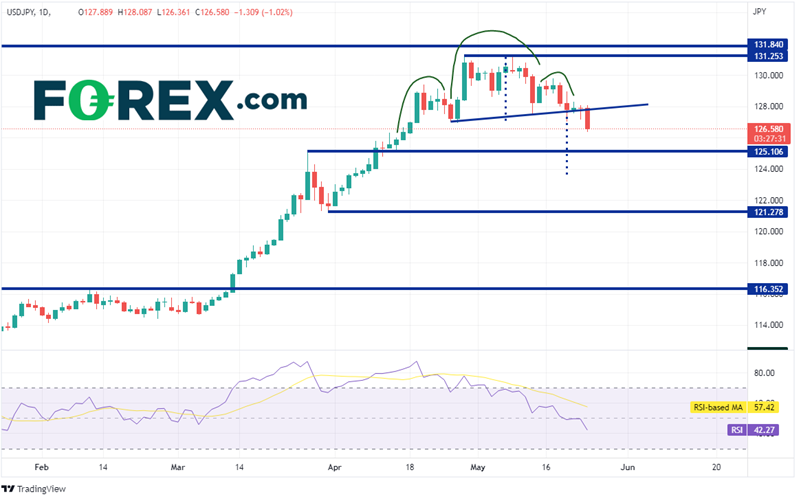 On a 240-minute timeframe, USD/JPY has stalled at the 50% retracement level from the low of March 31st to the high of May 9th, near 126.31.  If price is to reach the head and shoulders target, it must not only break below this level, but also horizontal support at 125.10, which confluences with the 61.8% Fibonacci retracement level from the same timeframe.  Below there, price can fall to the March 4th low at 121.28.  Horizontal resistance is just above current price at 127.02.  Above there, USD/JPY can move up to the highs from May 20th at 128.30, then a confluence of horizontal resistance at 129.78 and the psychological round number resistance level of 130.00. 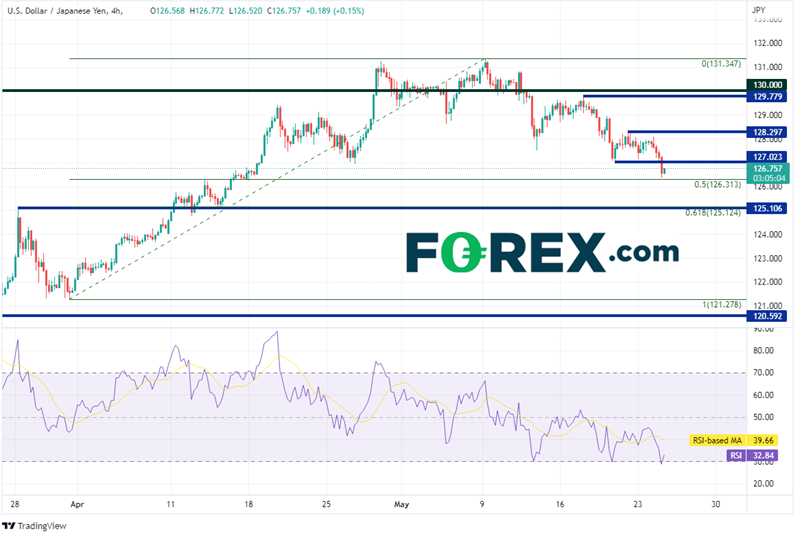 Weaker US housing data sent the markets into risk-off mode, dragging USD/JPY lower with it.  Will the pair continue to move lower towards its head and shoulder target?  If so, it may have to come at the expense of more risk-off in the markets.