Pound half rallies on Boris’ ‘half a chance’

The Brexit Party appears to have thrown in the towel in Tory seats, whilst the strongest upside triggers for the pound have been confirmed. The only key British political party that actually supports a hard Brexit now said it will no longer field 317 general election candidates in Conservative-supporting areas as it had initially planned.  Brexit Party leader, Nigel Farage, who isn’t standing in the 12th December election, has latterly become more concerned about the risk of another hung parliament, meaning an inconclusive result with no party winning an outright majority. From Brexit-supporters’ point of view, such an outcome could open the possibility that pro-remain MPs could secure a second referendum. “This announcement today prevents a second referendum from happening, and that to me is -- right now -- the most important thing in this country”, Farage said. He cited private polling suggesting anti-Brexit Liberal Democrats could gain traction if the Brexit Party stood against the Tories in key. Whilst he had “no great love for the Conservative Party…giving Boris half a chance by keeping him honest,” could allow Brexit to be delivered. Instead of standing in pivotal Tory seats, Farage said the Brexit Party would focus on Labour seats instead.

Sterling surged on Farage’s comments, extending Monday’s gains to $1.28979 from $1.283s beforehand, its biggest rise in around three weeks. The rate was around $1.28636 just now. Price action suggests that the possibility of fewer obstacles in the way of an outright Conservative Party majority would be welcomed by sterling buyers. Given the fact that a bigger Parliamentary Tory party could pass Boris Johnson’s Brexit deal more easily, uncertainty that has hamstrung Britain’s economy would be curtailed.

Boris Johnson welcomed the news. “We welcome Nigel Farage’s recognition that another gridlocked hung Parliament is the greatest threat to getting Brexit done”. But the pound’s pullback signals lingering doubts that Farage’s move will help the Tories much. Polling experts have pointed out that marginal seats held by Labour may be just as important for the election outcome as Tory marginals. With the Brexit Party still standing in all of these, the potential for damage to the Tories’ chances, if they fail to win such Labour-held seats, remains.

GBP/USD found temporary support above $1.28697 but was exploring below there as Europe’s session was winding up. Price reacted in similar fashion around the same area last week, though eventually succumbed, demonstrating weak support though maintaining the idea of inconclusive resistance. GBP/USD has been capped by but has also bettered $1.2867 in recent sessions. As intraday momentum tools reverse (see hourly RSI) there’s a strong possibility that price may mirror last week moves and head first to the 38.2% ($1.28476) retracement level of the end-October to 8th November down move. If so, another break of the 38.2% Fib may be possible. Still, given much corroboration of short-term declining trendlines so far in November, any fall below the 38.2% Fib may also respect these downtrends from the top side.

So far, the strongest caution for buyers this month has been evident reluctance to surpass late $1.28s on the way to $1.29. That resistance is also aptly echoed by $1.28964, 61.8% of the decline mentioned above, where cable reversed on Monday. A daily close above $1.287s could nullify recent tops. Without that though, bears would still appear to be in control, suggesting that short-term advances will continue to fray amid almost immediate offers. 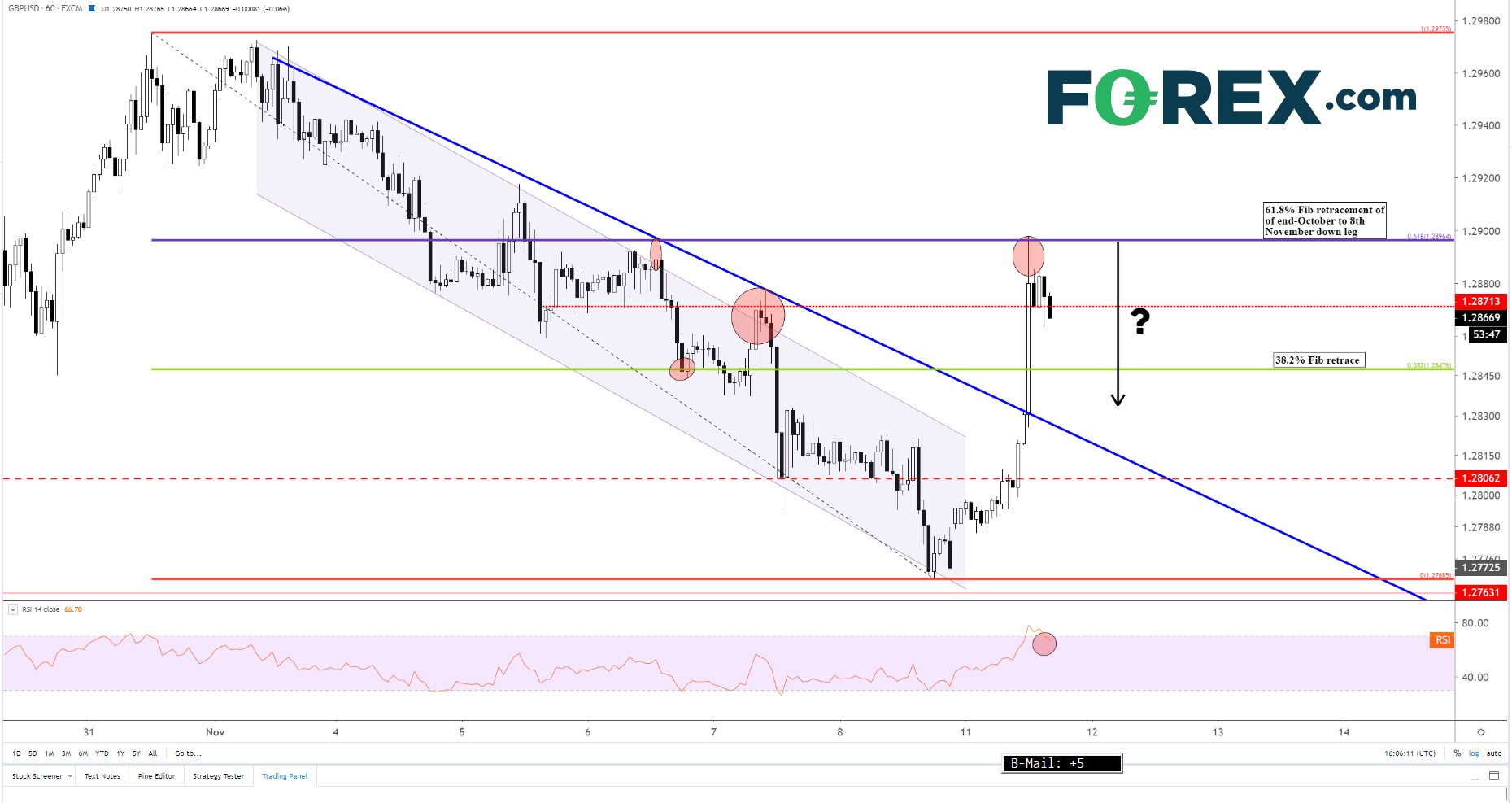