In Fed Chairman Powell’s press conference after the FOMC meeting on November 2nd, he said that “incoming data suggests that the ultimate level of rates will be higher than previously anticipated.  In addition, he noted that “how high rates rise is more important than the pace of tightening”.  At the time, the markets took this to be hawkish as it was the first time Powell mentioned rates would be higher than anticipated and that the pace was not as important as the terminal rate.

Fast forward to today’s speech on the economic outlook, inflation, and the labor market at the Brookings Institute.  Powell repeated many of the same comments from November 2nd, while adding that “the time for moderating the pace of rate hike increases may come as soon as the December meeting”.  This was now seen as dovish, as Powell is basically telling the markets that the FOMC will “only” hike by 50bps in December.  This was the unofficial pivot the markets have been waiting for.  In addition, Powell added that “relying less on forecasts means doing more risk management and slowing down rate rises at this point is a good way to balance the risks of overdoing hikes.”  He added, “ we don’t want to overtighten, which is why we are slowing down.”  But “cutting rates is not something we want to do soon.” 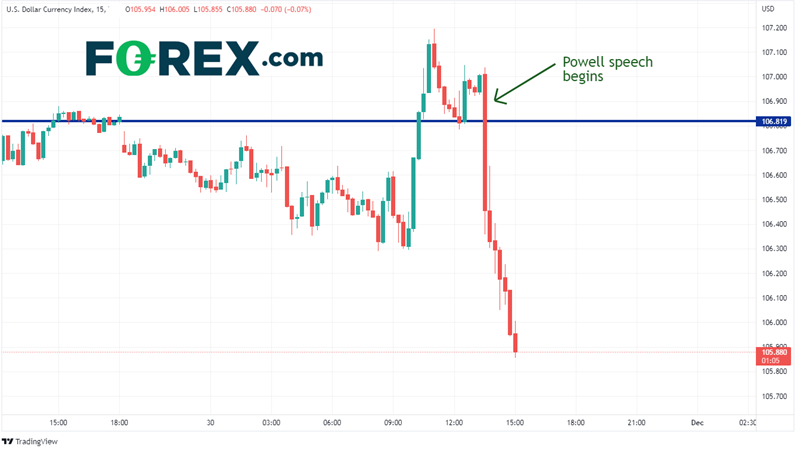 One of the largest beneficiaries of Powell’s dovishness was the Japanese Yen.  USD/JPY had been moving lower since the last round of intervention by the MOF on October 21st, when price reached a high of 151.95.  Since then, the pair has been moving lower, including a one-day selloff of 545 pips on November 10th.  However, the move lower stalled at the 38.2% Fibonacci retracement level from the lows of March 4th to the highs of October 21st, near 137.70.  Could Powell’s speech be the catalyst that the pair needs to push it lower? 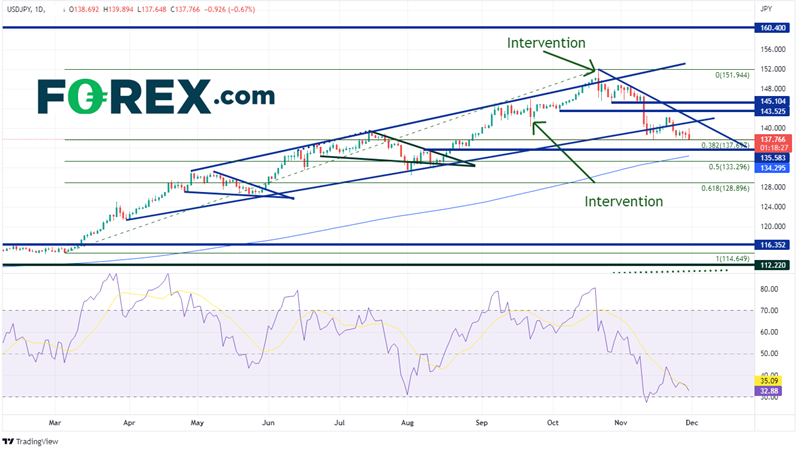 The next support level is the at the previous highs of early August at 135.58.  Below there, the pair can fall to the 200 Day Moving Average at 134.30, then the 50% retracement from the timeframe mentioned above at 133.30.  However, if the support holds, the first resistance is at the bottom trendline of the upward sloping channel near 141, then the downward sloping channel dating to October 21st near 142.25.  If USD/JPY moves above there, the next resistance levels is the lows from October 5th at 143.53.

Is this pivot from the Fed that the markets were looking for?  Based on the market’s reaction, it seems like it.  Watch to see if the US Dollar continues to move lower.  If so, stocks could move higher and may be headed towards a Santa Claus rally!