By :
Fawad Razaqzada
,  Market Analyst
Following back-to-back gains at the back end of last week, gold has started the new week on the front-foot, with investors looking to take advantage of downbeat prices ahead of a very busy week. Silver couldn’t hold onto its earlier gains on Friday but has started today’s session on the front-foot, along with gold.

Gold is finding support from two sources, as it has done over the last few days. First and foremost, it is the weakness we have observed in the US dollar, which is in response to some softening of US data and speculation about a potential recession. The slump in soft commodity prices and WTI crude oil going back well below $100 per barrel have also raised hopes that inflation is going to peak soon if it hasn’t already. Secondly, we have also seen some weakness in global bond yields as worries about the economy has replaced inflation fears.

Precious metals investors are now looking forward to the Federal Reserve meeting on Wednesday, where the US central bank is highly likely to hike rates by another 75 basis points to bring the Fed Fund rate to 2.50%.  Given the weakness we have seen in the dollar and yields last week, it looks like this is already priced in, as there was some speculation that the Fed would even consider a 100 bp hike. Unless the Fed does hike by 100 bp, there is a possibility we will see further weakness in the dollar, and gains for gold.

Investors know that front-loading of interest rates around the world is only going to bring a potential recession – and therefore interest rate cuts – sooner.

Gold’s bullish engulfing candle created around $1700 long-term support on Thursday still remains the most important technical signal the metal has received in recent times. For as long as gold holds above $1700, this should keep the bulls happy and bears at bay. 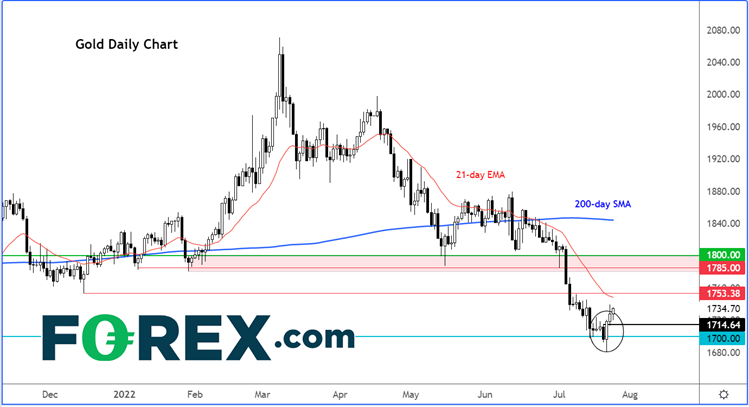 Silver is still trying to figure out what it wants to do around long-term support area between $18 to $19. Here, it has created several conflicting signals on the daily time frame in the last few days. But the lack of follow-thru has frustrated both the bulls and bears alike. Given gold’s lead, the risks are skewed to the upside for silver. 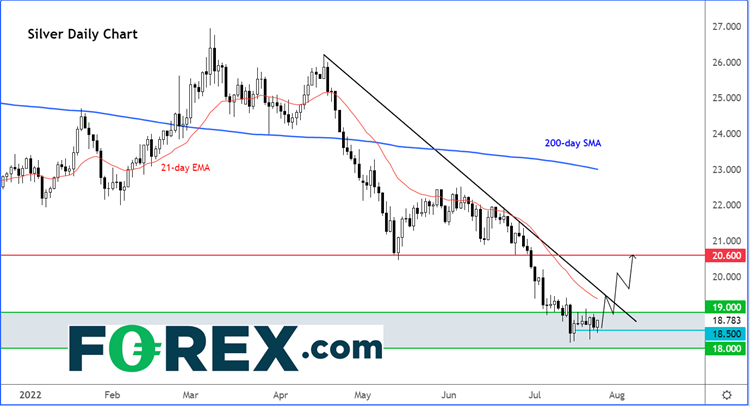