The Dow Breaks Out Of Compression

Since its V-bottom, the index rallied over 20% since the December low in an almost straight line. Whilst the index spent a month coiling within a symmetrical triangle, an elongated bullish engulfing candle provided a prominent low, where its failure to test the 23.6% Fibonacci retracement level provided another sign of strength for the trend. 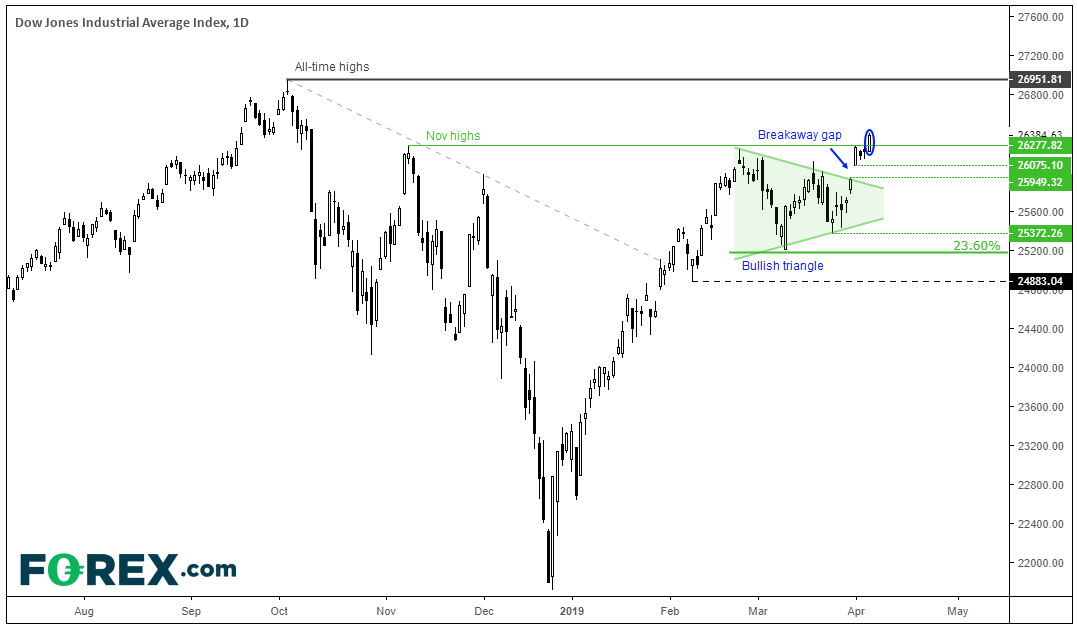 An upside breakaway gap confirmed the symmetrical triangle on Monday, in line dominant momentum. That we saw two days of compression prior to yesterday’s breakout (instead of retracing) further shows the dominance of the bull-camp, and we’re now look for the November highs to hold as support.

If successful, the triangle projects and approximate target just above record highs. That said, the zone around 26,800 – 26,950 could serve as a conservative target, as we’d expect a price reaction around such an important level such as all-time highs.

Trade optimism and a global PMI data is supportive of sentiment and, therefore, the stock markets. However, a positive NFP report could another leg-up for the index and, of course USD (note that DXY is testing key resistance ahead of the report). If sentiment is to turn, a close below the November highs could warn of a bull-trap, although the trend would remain structurally bullish above 25,200. And we’d also have the gap between 25,950-26,075 to provide the potential for support along the way.

US open: Stocks flat ahead of PMI data
By:
Fiona Cincotta