Yield differentials continue to favour the US dollar

The dollar spent most of the overnight session at the top of the board with USD/JPY breaking above 132 and rising against all its FX major peers. Traders took little notice of comments from BOJ officials, despite Kuroda reminding them that a weaker currency over a short period of time is negative for the economy. And why should they? When it is quite apparent that the BOJ favour defending YCC (yield curve control) over a weaker currency.

135 is the next major line in the sand for USD/JPY – the February 2002 high. But today’s question is whether it can close above 133, given its daily range has already accounted for around 75% of its 10-day ATR (average true range).

AUD rallies after 50-bps hike from the RBA

The RBA hiked rates by 50 bps to 0.85% - making it the first 50 bps hike since February 2000. That’s also 75-bps over the past two meeting, which makes it their most aggressive back-to-back meeting on record. I really think the RBA have restored some credibility today by coming out swinging – they may have taken a leaf from RBNZ’s book, but it needed to be done with inflation running so hot.

Yet despite this, the USD, GBP, CAD and NZD retain a positive yield differential over the Aussie. And they have stopped short of assuring they’ll continue to hike in 50-bps increments in their statement. Still, they acknowledge the ‘Board expects to take further steps” in regards to normalising policy. And as they themselves stated the neutral rate is estimated to be between 2-3%, it still leaves room for several more hikes on the table.

A hawkish RBA is still relatively novel for AUD traders, whilst the Fed’s multiple hikes have been well telegraphed. This means we could expect the gulf between RBA and Fed policies narrow, which could be beneficial for AUD/USD over the next quarter or two. With the RBA estimating their neutral rate is around 2-3%, there’s still scope for further hikes and for bears to close out their Aussie shorts (traders have remained net short AUD futures since for 12-month).

China is reopening which could be a boost to commodity demand and therefore the Aussie. And with early signs of ‘peak inflation’ on the horizon in the US, it’s not impossible the Fed may need to back pedal – there have already been murmurs of the Fed taking a ‘pause’ around September. 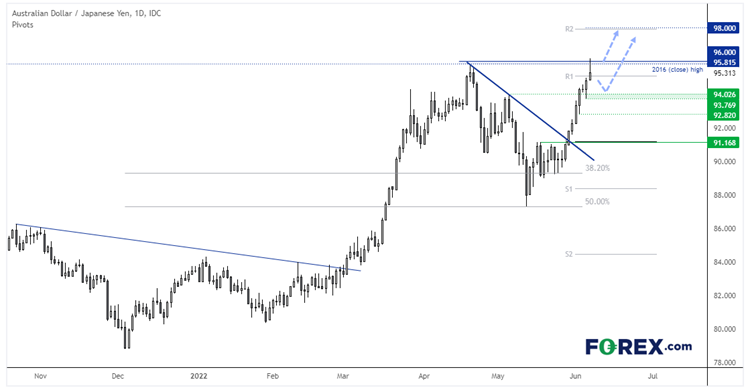 Until we see the BOJ defend their currency then the yen is likely to continue being sold short. Ultimately, they have opted to defend yield curve control (YCC) over the yen, so as long as the yen depreciates in a stable manner, the BOJ will let it slide. And against the backdrop of a refreshingly hawkish RBA and forever-dovish BOJ, AUD/JPY could be headed for 100.

The strong trend on the AUD/JPY daily chart suggests a break above the high around 96.00 is on the cards. However, we can already see that traders have booked profits around this key level, and it is rare to see such historical levels break upon their first attempt. Therefore traders could seek to enter long should evidence of a higher low form around a support level in anticipation of its next leg higher towards the 98 resistance zone. 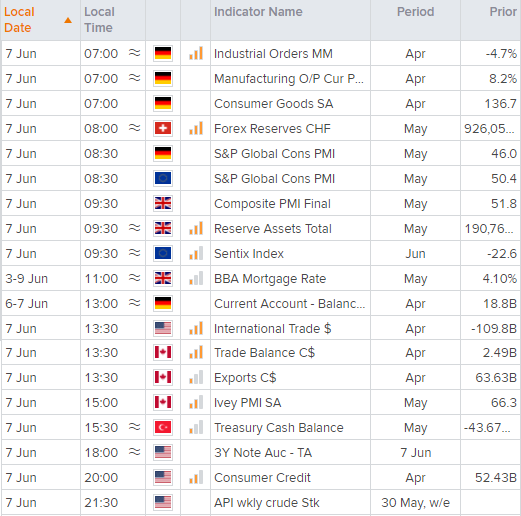