FTSE breaks out of consolidation, USD/CAD to mean revert?

Equity markets continued to feel the weight of the Fed’s hawkish comments overnight as Asian indices traded broadly lower. The Nikkei was the worst performer and fell around -1.7%. Weak China service PMI also added to the slight risk-off vibe as contracted at its fastest pace since February 2020 and new orders hit a 6-year low.

Futures markets are pointing lower for European bourses, although the FTSE remains relatively flat and the index remains an outperformer of late.

Today’s FOMC minutes may have been overshadowed

Hawkish comments from key Fed members yesterday likely overshadows today’s FOMC minutes, as they point towards a 50-bps hike at the next FOMC meeting and a faster balance sheet reduction than anticipated. Daly thinks they can raise rates without triggering a recession or stagflation, and Brainard sees that controlling inflation (by raising rates) as their most important task.

PMI data for Europe and Canada up next

Given the weakness in global PMI’s since the war in Ukraine (and the fact the February reports did not capture it) then it is likely we’ll see further weakness today. The question is how much and whether these reads will contract, with weak new orders.

But should we see another hawkish surprise in today’s FOMC minutes coupled with a weak PMI print for Canada, USD/CAD looks interesting for potential long setups. 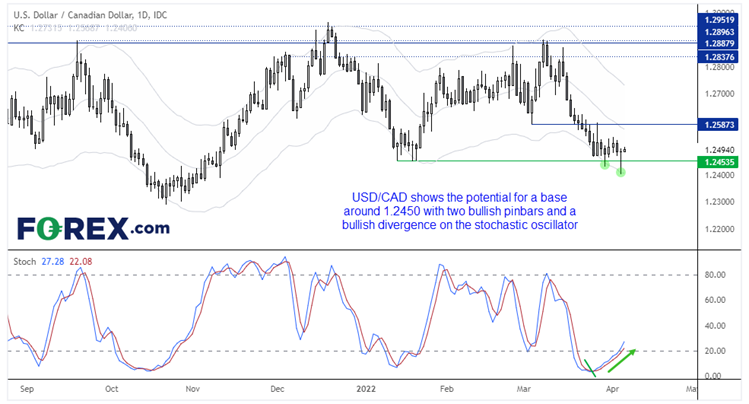 The downtrend on the daily chart has failed to see a daily close beneath the January low of 1.2453. Two bullish hammers have formed and a buy signal and bullish divergence has formed on the stochastic oscillator. Furthermore, the lows of the hammers have respected the lower Keltner band. Ultimately, we now see the potential for some mean reversion and a break above 1.2500 on the cards and for it to head towards 1.2560, or near tis 20-day eMA. A daily close above these levels suggests it may be more than mean reversion.