Amidst all the focus on the escalating war in Ukraine, markets are also digesting the latest headlines from high-level US policymakers.

Last night, President Biden presented his first State of the Union address, and predictably, the Russia-Ukraine conflict was the top item on the agenda. The President addressed wealthy Russians directly, stating that the US will “seize your yachts, your luxury apartments, your private jets. We are coming for your ill-begotten gains.” While it remains to be seen how these types of sanctions will be actioned in the coming weeks, it may make an already-unpopular incursion into Ukraine even less desirable for Russia’s ruling class, though the market implications are likely to be minimal.

Separately, Biden also announced a domestic “Unity Agenda for the Nation” focused on the opioid epidemic, children’s mental health, veteran health care, and eliminating cancer. These goals would seemingly attract bipartisan support, but with Biden’s own popularity at record lows during an election year, significant progress on any Presidential priorities is relatively unlikely.

By contrast, the Federal Reserve is a policymaking body that doesn’t require much in the way of bipartisan support, and Fed Chairman Jerome Powell delivered his own speech on the state of the US economy and monetary policy to the US Senate this morning. The highlights from his prepared remarks follow (emphasis mine):

In other words, a war nearly 5,000 miles from Washington DC with minimal direct economic implications on the US will not deter the Fed from raising interest rates this month, though the risk-off move in markets has dramatically reduced the probability of a 50bps (0.50%) “double” interest rate hike to start the cycle.

Traders seemed somewhat reassured by Powell’s comments, and Fed Fund futures traders are once again pricing in five 25bps (0.25%) rate hikes by the end of this year as the central bank scrambles to mitigate ongoing inflationary pressures. Indeed, by driving the price of oil sharply higher and reducing the market’s appetite for more aggressive interest rate increases, the escalating conflict in Ukraine has arguably increased the risk of inflation remaining elevated in the coming quarters. 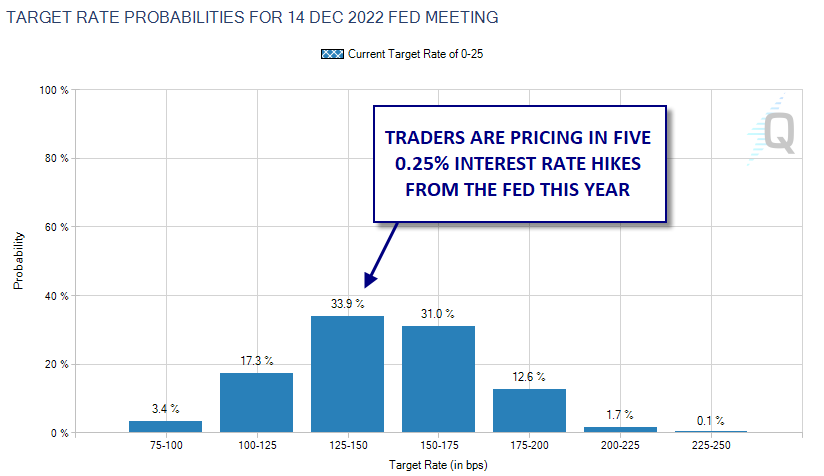 This morning’s reassurance that the Fed will raise interest rates as expected this month has helped the greenback catch a bid against safe haven currencies like the Japanese yen and Swiss franc. Focusing on USD/JPY, rates are riding their 50-day EMA higher, though the pair remains within its broader 113.50-116.35 range as of writing.

Given the technical and fundamental backdrop, traders are likely to favor buying short-term dips on the pair as long as it holds above the 50-day EMA, though it will take a confirmed break above previous resistance at 116.35 to turn the medium-term bias back in favor of the bulls. Above that level, the 6-year high above 118.00 would be a logical target, whereas a break below the 50-day EMA would expose the bottom of the range at 113.50 next.