In a bizarre statistical quirk, the US economy has created “exactly” 428K jobs in each of the last two months. Of course, that statistic will almost certainly be outdated the moment the May NFP report is released on Friday with revisions to previous months’ readings…not to mention the fact that these reports are just survey-based estimates of the situation in the US labor market anyway!

Regardless, that unlikely coincidence underscores a key point about the US jobs market: It’s still producing a consistently solid number of new positions, with employers competing to offer compelling wages to attract talent. Against that backdrop, the Federal Reserve is committed to rapidly tightening monetary policy to ensure that inflation doesn’t become entrenched in a wage-price spiral higher.

For the May NFP report, consensus expectations are for 325K net new jobs and average hourly earnings projected to rise by 0.4% month-over-month: 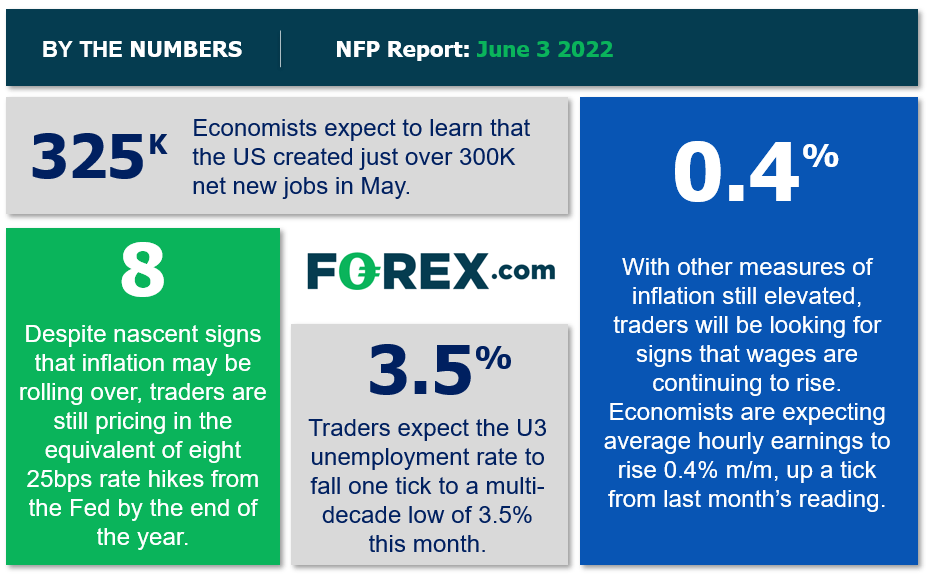 While this marks the final jobs report before the Fed’s mid-June meeting, it’s unlikely to have an immediate impact on monetary policy; Jerome Powell and company have consistently noted that the central bank will raise interest rates by 50bps (0.50%) at each of the next two meetings, and traders have taken the hint, pricing in a 99% chance of exactly that in two weeks’ time.

As regular readers know, we focus on four historically reliable leading indicators to help handicap each month’s NFP report, though unfortunately, the ISM Services PMI report will not be released until after NFP this month:

As a reminder, the state of the US labor market remains more uncertain and volatile than usual as it emerges from the unprecedented disruption of the COVID pandemic. That said, weighing the data and our internal models, the leading indicators point to a slightly below-expectations reading in this month’s NFP report, with headline job growth potentially coming in somewhere in the 225K-325K range, albeit with a bigger band of uncertainty than ever given the current global backdrop.

The US dollar index rallied to nearly 20-year highs in the 105.00 area midway through May before pulling back sharply to the 102.00 range as we go to press. As a result, the greenback is neither overbought nor oversold on a near-term timeframe, leaving our general outlook toward the world’s reserve currency relatively neutral.

As for potential trade setups, readers may want to consider EUR/USD sell opportunities on a stronger-than-expected jobs report after the pair failed to overcome 1.0770 resistance and broke below its near-term bullish channel earlier in the week. With investors growing wary of the European economy’s durability, a strong US jobs report could drive the pair back down below 1.0600.

On the other hand, a soft jobs report could present a sell opportunity in USD/CHF. The safe haven pairing traced out a similar peak to the broader dollar index throughout the month of May, but rates have failed to form any meaningful bounce this week, suggesting that a break lower from here could extend the selling pressure. A move below 0.9550 would open the door for a move toward the mid-0.9400s next week.