Nothing changes for gold, stocks as yields resume higher

It has been a busy day for central banks, with the likes of BoJ, BoE, SNB and CBRT all making headlines with their decisions earlier today, following the Fed’s decision to hike by 75 basis points the day before. For stock markets and gold, nothing has changed. Both remain rooted in a bearish trend as investors watch yields continue to rise following a flurry of central bank action this week.

Today saw no less than 4 major central banks announce policy decisions. Without getting to much into the details of each, the CBRT’s decision to cut rates by 1% should not surprise anyone, even if its was an unexpected move, given Erdogan’s control of the Turkish central banks. Unsurprisingly, the lira fell to a new low against the dollar. The GBP/USD slipped back below the 1.13 handle after the BoE hiked rates by 50 basis points instead of 75 bps as some had expected. The SNB raised interest rates by 75 basis points, putting its benchmark rate into positive territory for the first time in ages. Japan’s government stole the show though with its intervention to buy the dollar and sell, presumably large amounts of, the yen, after the BoJ had left its policy unchanged. The USD/JPY which had initially rallies to almost 146, slumped more than 500 pips to trade for a time below the 141 handle, before bouncing back.

Today’s flurry of central bank meetings came a day after the US Federal Reserve announced a 75 basis point hike and signalled that it would continue to hike rates aggressively until inflation comes back under control, a move that led to another upsurge in the dollar and yields. Today, the 10-year has reached 3.7%. In response, gold has weakened again, while US stocks have given up earlier gains. 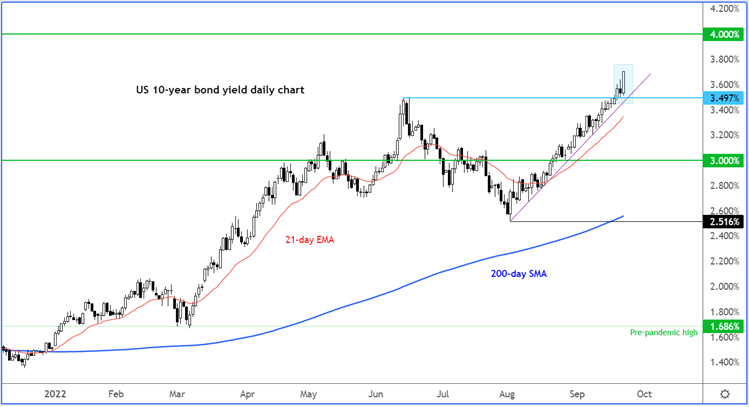 Gold in danger of fresh breakdown

Investors are staying away from gold because of rising bond yields and a very strong US dollar. In an environment of rising interest rates around the world, they are instead choosing to sell assets that have little or no yield, such as low-div stocks and precious metals. The latter also costs money to store, making it even less appealing from an investment point of view in the current climate.

Consequently, the precious metal remains in danger of falling further lower after it plunged below key long-term support around the $1676 to $1680 area. 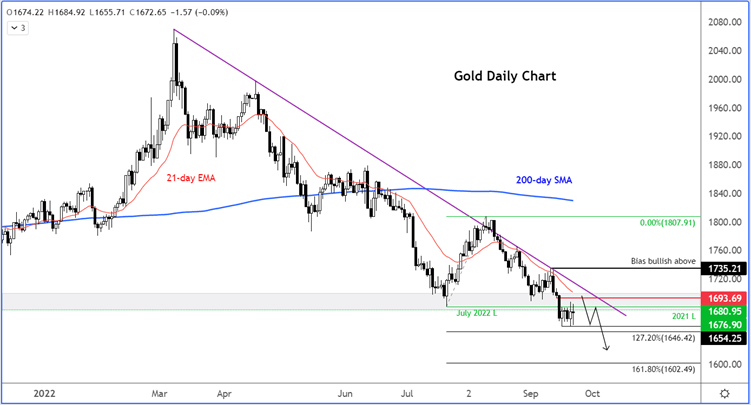 Going forward, it is all about when the interest rate hikes will be fully priced in. Until this happens, it is unlikely that gold will be able to shine very brightly. How quick the markets will price in rate hikes depends pretty much on incoming data, especially inflation figures. The US dollar and bond yields thus remain supportive for now until there’s evidence of inflation coming down sharply. Perhaps prices could come down in the event of a sharp economic downturn, causing demand to weaken. For that reason, other macroeconomic pointers will also be important to watch closely.

In Europe, the energy crisis is continuing to weigh heavily on the Eurozone economy. Russian President Putin this week said that military reservists are to be sent to Ukraine as part of a "partial mobilisation" of his forces to ensure Russian territorial integrity. The latest move is a step up in Russian aggression which doesn’t bode well for Europe given the situation regarding gas supplies. With Russia reinforcing its military operation in Ukraine, the war looks like will drag on unfortunately, which may mean a long cold winter for the rest of Europe dependant on Russian energy.

So, the macro situation remains far from being ideal for equities. Indeed, the German DAX looks like it is going to break down below its summer lows first: 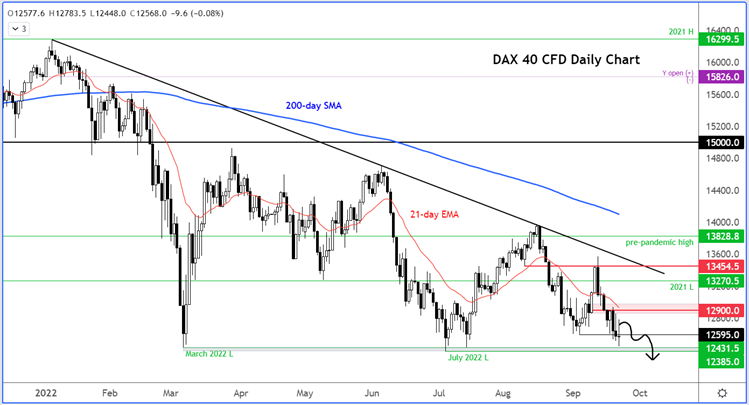 In the US, the S&P 500 remains inside a bear trend, given those longer-term lower lows and lower highs, with the 200-day average now pointing lower and holding comfortably above the market. Old supports are turning into resistance. One such area was around 3905, which held firm follow the central bank action this week.

The S&P has now broken another support area around 3830. For as long as it can hold below here on a daily closing basis, the path of least resistance would remain to the downside in the short-term outlook. A new on the year looks increasingly likely for the Spoos. 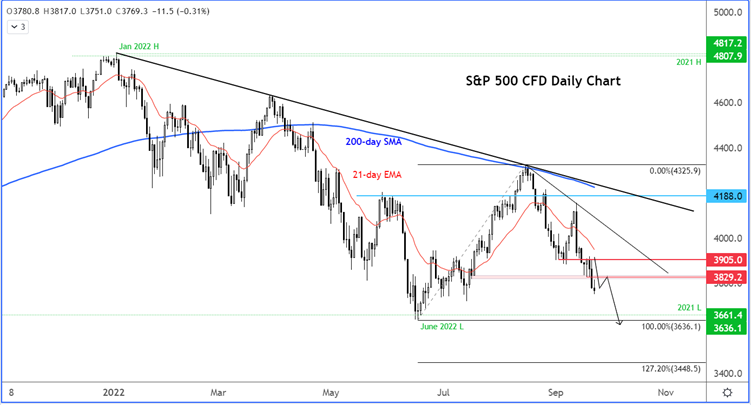