The GBP/USD was down for a second day this morning, giving back some of its recent gains made on the back of hopes over an imminent breakthrough in Brexit talks between the UK and EU over the issue of Northern Ireland. In part, the cable’s retreat is due to this morning’s weaker-than-expected UK economic data. The dollar, meanwhile, has also continued its uptrend after a small pullback on the back of the US mid-term elections. But make no mistake about it, the focus clearly remains on Brexit as far as the cable and other pound crosses are concerned. Until there is actual progress in this regard, it will remain pretty much a headline-driven market. Brexit secretary Dominic Raab recently claimed that a deal could be signed by 21 November and we are now not that far off from that date. Ahead of this, expect to see lots spikes in GBP as traders respond to the latest headlines that will inevitably be leaked over the next week and a half. That being said, we will have more economic data to consider from both sides of the pond, which could provide short-term volatility for the pound next week.

UK economy failed to grow in August and September

As expected, the UK economy grew 0.6% in the third quarter, it fastest rate since the end of 2016. Growth was boosted by exports and household spending, but business investment fell surprisingly sharply by 1.2% on the quarter. However, the ONS’s latest monthly data shows growth has stalled with GDP in both August and now September printing 0% respectively. It looks like the impact of good weather on growth in the summer was overshadowed by Brexit clouds in autumn. That being said, construction output in September rose by a much better-than-expected 1.7% while manufacturing production rose 0.2%, slightly ahead of forecasts. So it was not all doom and gloom out there, but equally not everyone was positive either as Brexit uncertainty continued to dent sentiment.

Fed rate hikes may continue through the first half of 2019

Meanwhile investors have been reminded by the Federal Reserve that, despite the outcome of the midterm elections and criticism from US President Donald Trump, it is not willing to deflect from its once-a-quarter rate hiking cycle for at least another few quarters. Indeed, in its most recent policy statement, released yesterday, the FOMC continued to signal that further gradual rate increases are likely. As a result, the market-implied odds of a December interest rate increase (78% probability) hardly budged, as my US colleague Matt Weller highlighted in his report HERE.

Important week ahead for GBP/USD

Next week will arguably be more important for the GBP/USD because of the upcoming data releases from both sides of the pond. UK wages data will be released on Tuesday ahead of CPI the following day and retail sales on Thursday. From the US, we will also have CPI on Wednesday and retail sales on Thursday. These data releases have the potential to impact the near-term direction of the cable, although they will likely to be superseded by any Brexit-related headlines.

GBP/USD stuck between a rock and a hard place

From a technical point of view, the GBP/USD is still contained within the range it has been stuck inside since the start of the summer, unsurprisingly suggesting that market participants are in a wait-and-see mode until committing to one or the other direction. Long-term support has been defended around the 1.2700 handle, while resistance has been provided by around 1.3250-1.3300 area. Within this wide range, the 1.3020 level has acted as a key pivotal level and that’s exactly where the GBP/USD was trading at the time of writing. After last week and this week’s earlier gains, the cable has now given back a large chunk of its gains. Thus, if it were to close the day around its current levels or lower then it will form another bearish-looking inverted hammer candlestick pattern on its weekly chart, which would point to further weakness for early next week. But these apparent bearish-looking candles could prove to be traps for bears. With that in mind, any move above the most recent high at 1.3255/60 area would probably be a long term bullish development for we will then have a higher high. 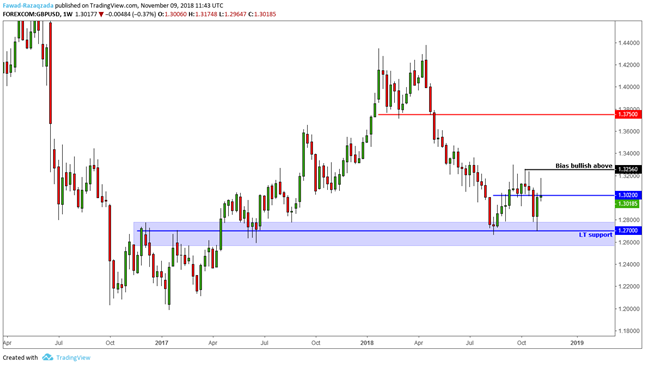