Such concerns are boosting traditional “safe haven” currencies like the Swiss franc and Japanese yen, but the moves so far today are relatively subdued. USD/JPY, for example, briefly peeked below 108.00 early in today’s European session, but rates have recovered back to trade in the 108.25 area as of writing. Since the early-January flash crash, the pair has been consolidating within a tight symmetrical triangle pattern; for the uninitiated, or the uninitiated, this pattern is analogous to a person compressing a coiled spring: as the range continues to contract, energy builds up within the spring. When one of the pressure points is eventually removed, the spring will explode in that direction.

While it’s notoriously difficult to predict the direction of a symmetrical triangle breakout in advance, analysts will typically defer to the dominant trend heading into the formation, which in this case was unequivocally down. If we see that scenario play out, a break below last week’s low near 107.75 would open the door for a continuation down toward 107.00, 106.00, or even the flash crash panic lows near 105.00 in time.

On the other hand, a bullish break above the highs near 109.00 could signal that a near-term bottom is in (especially in accompanied by a thaw in US-China trade relations or an end to the US government shutdown), clearing the way for a recovery toward previous support around 110.00 or higher in the coming days. 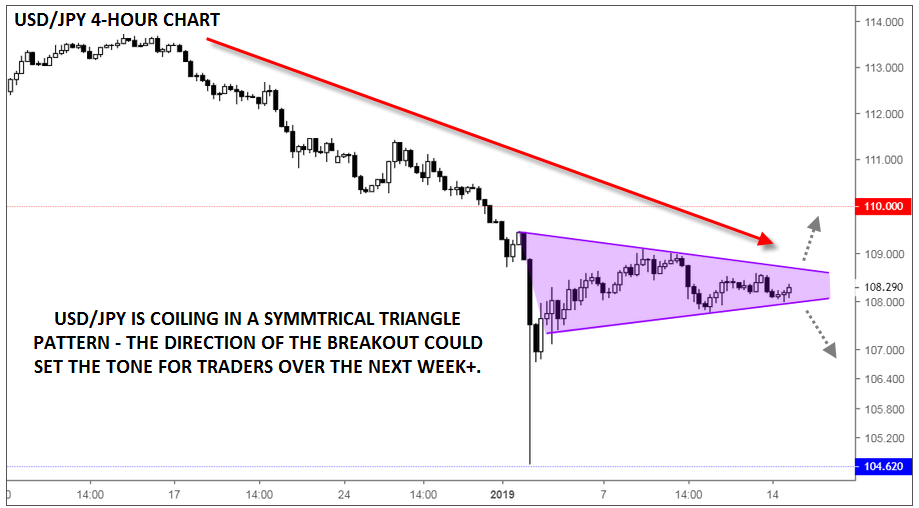