The ECB hiked rates by 75 bps to bring the deposit rate to 2%, as widely expected.  This is the highest level for the key rate since 2009.  The decision was not unanimous however, as 3 officials only wanted to hike rates by 50bps.  In addition, the statement noted that members would take a meeting by meeting approach to rate decisions and dropped the text stating that it would raise rates over “the next several meetings”.  The statement said that it “expects to raise rates further, to ensure the timely return of inflation to its 2% medium-term inflation target”.   Regarding inflation, the statement said that “Inflation remains far too high and will stay above the target for an extended period.”  The latest reading of the Euro Area inflation for September was 9.9% YoY, its highest ever, vs a prior reading of 9.1% YoY.   October’s CPI will be released on Monday with an expectation of 9.6% YoY.

In the press conference that followed, Christine Lagarde explained that QT was not discussed at this meeting, disappointing some traders who took this as a dovish clue.  She said that it will be on the agenda at the December meeting, however no start date will be announced. She also said that economic activity likely slowed significantly in Q3 and is likely to slow further in Q4 and Q1 2023.  Regarding the economic outlook, she said that risks are clearly to the downside and regarding inflation, risks are clearly to the upside.

The big mover on the day as a result of the ECB meeting and the subsequent press conference was the 2-year German Bund yield, which fell nearly 10% on the day from a high of 2.036% down to 1.768%. 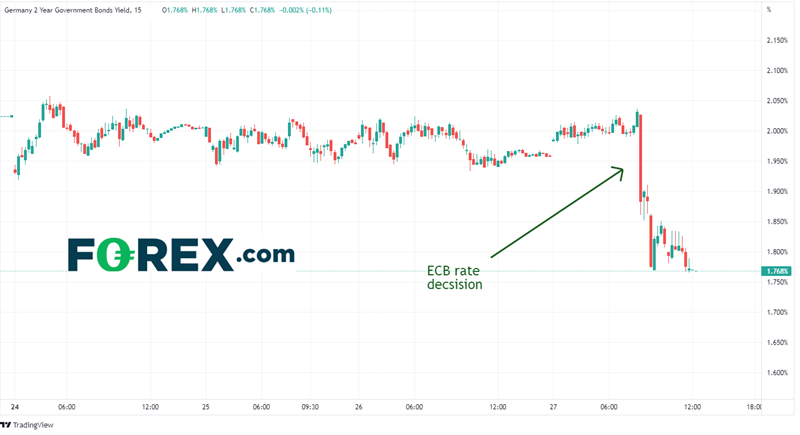 The lower rates dragged the Euro down with them.  EUR/USD has been in a downwards sloping channel since February.  However, on Tuesday, the pair moved higher out of the channel and then back above parity for the first time since September 20th.  As traders looked at today’s ECB actions as a “dovish hike”, EUR/USD reversed from a high of 1.0080 and fell to a low of 0.9959. (At the time we go print, EUR/USD is still making new daily lows).  First support on the daily timeframe is a confluence of support at the top downward sloping trendline of the long-term channel and the 50-Day Moving Average near 0.9889.  Just below there, support is at an upward sloping trendline from the lows of September 28th near 0.9770 and then the September 28th lows at 0.9536.  However, if he confluence of support holds, the first resistance is at the highs from September 12th at 1.0198 and then the 38.2% Fibonacci retracement level from the highs of February 10th to the lows of September 28th at 1.0284.  Above there, price can move to a zone of resistance between 1.0349 and 1.0369. 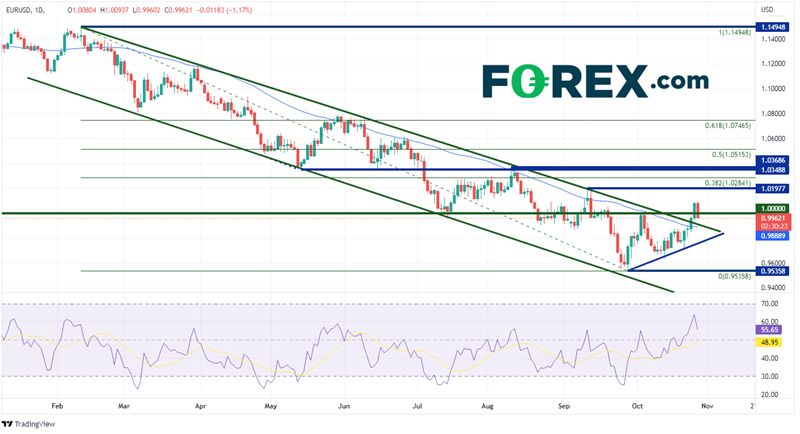 The ECB hiked rates on Thursday by 75bps, as expected.  However, the tone set by the removal of forward guidance and the lack of information regarding QT led the markets to believe this was a dovish hike.  Will the ECB continue to hike rates?  The first clue may come on Monday  when the preliminary look at the October CPI will be released!