European Open: US Vaccinations to rally from here? 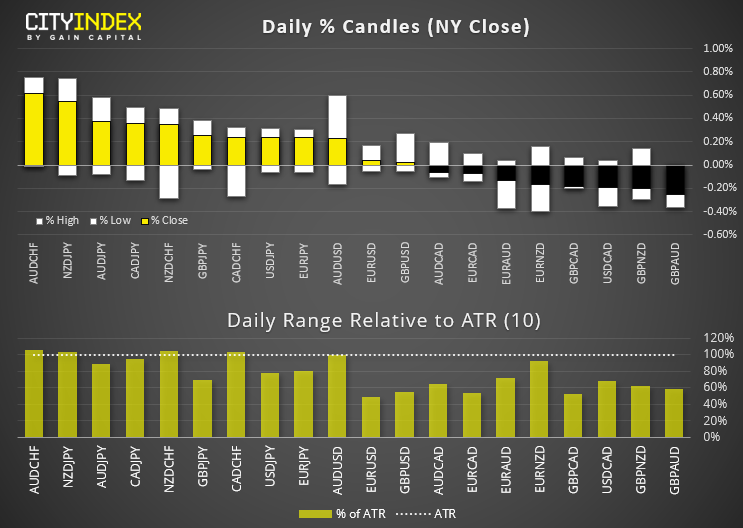 President Joe Biden remains confident that the US can exceed his target of achieving 100 million vaccinations within the first 100 days of his presidency. And so he should be if Pfizer’s CEO claims stand true. Albert Bourla claimed Pfiezer have already supplied 40 million doses of their vaccine to the US government and expects to have released a total of 200 million by May. Moreover, vaccine production times have been reduced to an average of 60 days.

With Joe Biden’s stimulus to be unveiled in the coming weeks and the increased probability of lockdown restrictions being eased, the economic backdrop for the US appears relatively appealing.

US futures initially ticked higher, yet Nasdaq 100 futures are currently down -50.25 points (-0.36%) and the S&P futures down -10 points (-0.3%).  Despite falling for four consecutive days last week, volatility remains low and prices remains supported not far from their record highs.

Copper extended its lead with a fresh 11-year high in overnight trade on supply concerns and stronger demand. With momentum on the increase, it’s beginning to show the hallmarks of a ‘blow off’ top and, having gained over 17% this month already, we have to question just how much juice remains in its bullish tank. Yet with no immediate signs of a top in sight bears could do well to step aside until momentum turns.

Early forex moves in the Asian session saw an extension of Friday’s risk-on vibe; NZD and AUD were the strongest majors whilst the Japanese yen and Swiss franc were the weakest. Emerging markets were also off to a stronger start with the Turkish lira, Mexican peso and South African Rand at the top of the leader board amidst a weaker dollar environment.

Yet as the session wore on the Antipodeans gave back most of their early lead and now show potential bearish hammers on the daily charts. With a lack of news flow the moves appear to be technically driven, but AUD/USD traders should be mindful of the 200-month eMA which is currently capping as resistance at 0.7890. And such important levels rarely break upon first attempt.

EUR/USD continues to find its footing back above the 1.2000 handle, helped by a weaker USD, stronger US yields and higher yield differentials for Europe (German 10 year – Italian 10 – year). Yet today’s price action remains confined within a tight just off Friday’s highs.

GBP/USD remain anchored to last week’s multi-year high above 1.4000 and appeared set to break higher at London open, as Boris Johnson unveiled plans to reduce lockdown restrictions yesterday. Yet with another two weeks of tough restrictions cable was unable to break materially higher. From the 8th of March all pupils will be able to return to schools and two people enjoy outdoor recreations such as café’s, parks and pubs. The UK’s FTSE 100 is expected to open lower with futures currently down by -0.6%.

Asian indices were higher on Monday after the PBOC (People’s Bank of China) left their benchmark lending rates unchanged. Nikkei and Hang Seng futures remained the leaders of the session and initially rallied around 1.3% before handing back some gains and closing 0.7% and 0.3% higher.

Boeing out of favour with Japan

Boeing has made unfavourable headlines yet, as Japan has requested that airlines no longer use the their Boeing 777s plane equipped with P&W4000 engines. This is in response to an issue with a United Airlines flight on Saturday when a faulty engine forced the pilot to land the plane shortly after take-off (social media videos showed the engine exploding during flight).

Despite three days of heavy selling last week, USD/JPY managed to find support at its 200-day eMA today and use it as a springboard after the Asian open. The daily chart continues to print a series of higher lows and highs, and we see price action on the hourly chart that suggests demand is building. 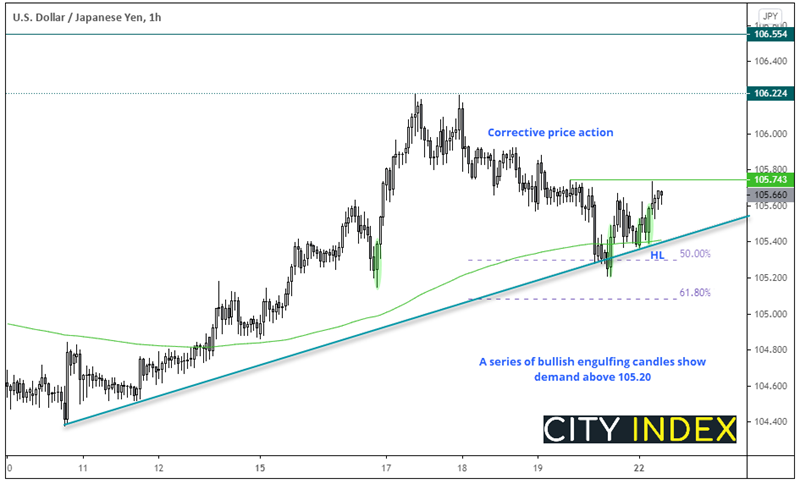 Switching to the hourly chart shows corrective price action from the 106.22 high failed to break a bullish trendline, and support was found around the 50% retracement level. Moreover, bullish engulfing candles have formed above 105.20 to show demand at this level and support has since been found at the 200-hour eMA, where two more bullish engulfing candles form part of its latest higher low.

The German IFO report is the main economic data print today, and the prior read was less than rosy. January’s headline index dipped to a 6-month low of 90.1 with both the manufacturing and services subindices pointing lower. The trade index declined by -17.2 points, its sharpest fall since May 2020 and the construction sector fell for a third consecutive month by -5.1 points. Given the business climate index seemingly topped in September and PMI data was also softer than expected, we are on guard for another weak print today.

ECB’s President, Christine Lagarde, is due to speak at the European Semester Conference at 13:45.