This piece from StoneX was posted with permission by the author Rhona O’Connell, Head of Market Analysis for EMEA and Asia at StoneX Group. Please visit the StoneX Market Intelligence portal and consider subscribing for more of Rhona and team’s research.

Gold posted a decline in the first quarter of this year, the first quarterly fall since Q1 2018. The key influences were as follows: the continued focus on, and increasing confidence in, the vaccination programme in a number of countries, most notably the United States, increasing concentration on bond yields, tying in with growing confidence in an economic recovery and linked also with concerns over inflation.

Historically, increased fears over inflation have largely (but not always) been favourable to gold. This time, though, the growth in confidence at the consumer level and the expectations of a benign outcome from the vaccination programmes have combined to focus investor attention on economic growth prospects; this has boosted longer term bond yields. Rising confidence has therefore also led to some asset rotation. All these factors have combined to, in some investors’ eyes, reduce gold’s risk-hedge role in the cross-asset spectrum and thus put pressure on gold prices. 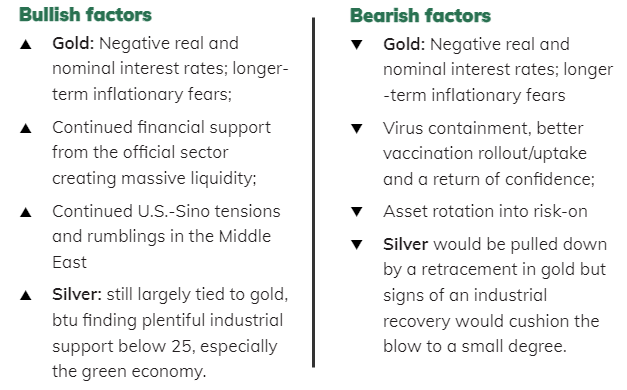 The fact that real rates are, largely, still negative has been partially overcome by thoughts that they may once again become positive. This is despite the continued rhetoric from central bankers, with Fed Chair Jerome Powell in the vanguard, that interest rates will stay lower for longer (or potentially much longer) until the Fed, at least, has fulfilled its dual mandate of achieving maximum employment and (average) inflation of 2% for a good while. Compounding this has been the erosion in the gold Exchange Traded Products. Reported on a daily basis, these instruments are a clear indicator of sentiment in the professional sector (gold ETF-holders are largely, though not exclusively, institutional, unlike silver, where it is the other way round) and they can therefore inform headline sentiment; in 2013 they became price makers rather than price takers as professional investors unwound gold holdings in favour of value stocks and the metal found its way rapidly into the Far East, into the welcoming arms of Chinese investors.

We had expected something similar to happen this time, but it has arrived a good six months earlier than we had been looking for (albeit on a smaller scale, thus far at least). We will feel that this may be premature and unlikely to be followed through on a large-scale. The Global Financial Crisis was man-made; this time we are still dealing with a partial unknown in a mutating virus and the economic recovery is (apart from China) still nascent – and in the case of Europe it is a few months behind North America, which is itself still looking at unemployment in excess of 6% and still relying on fiscal stimulus. 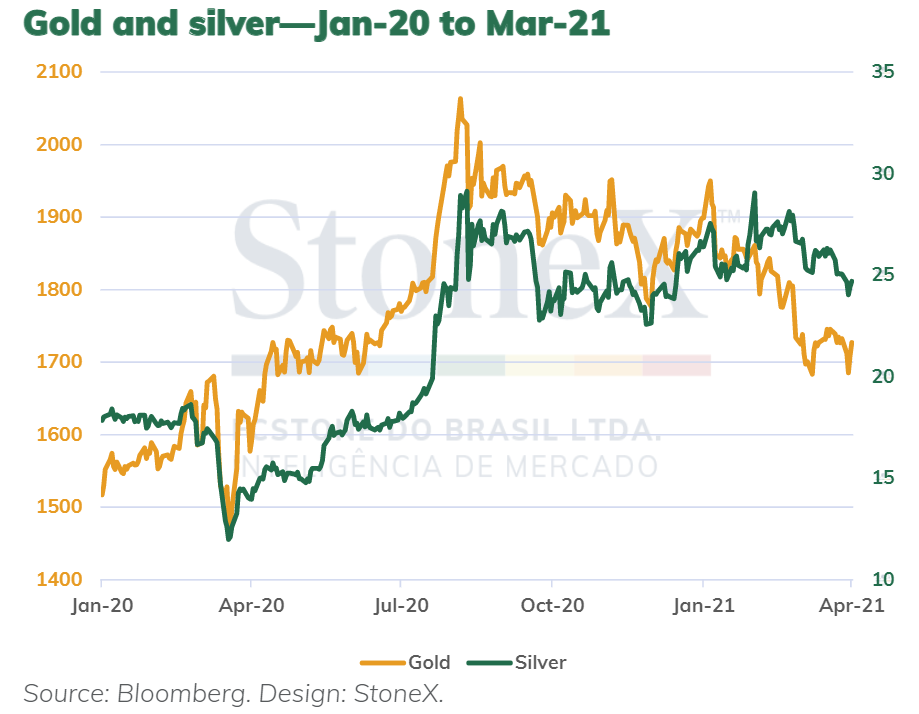 All of the above defines why we think that gold still has upside potential. The economic recovery is heavily contingent upon government stimulus and the cushion that it puts under the financial sector and the outlook is still uncertain. Consequently, there is a tremendous amount of liquidity still looking for a home (the IMF estimates that $12Tn were added to central banks’ balance sheets globally last year) and gold's role as a risk hedge is still valid. Concerns over inflation are to some extent misplaced; all economies need an element of inflation to encourage spending and investment, hence the 2% target. Note this is a target, not a threat.

As confidence grows in the western hemisphere, so by association the appetite for gold at the individual level in the Gulf, south and south-east Asia is growing. Buying has picked up smartly since mid-quarter, even with India experiencing a fresh wave of infections. Given that turnover in the Over the Counter market was 137 times mine production last year (227 times if derivatives are included) then it is clear that the ”hot“ money will determine trends but physical flows are also important in determining tightness and local premia, and can cushion price falls. They are, though, rarely enough to drive prices one way or the other without the financial sector to help.

Meanwhile silver’s fortunes remain wedded to gold for now. When gold is not showing a discernible trend, silver tends to revert to its industrial character, but over the past quarter it has danced largely to gold’s tune. Lively industrial activity has been developing, with bargain hunting in evidence at prices below $25. A key here is electrification. Silver has the highest electrical (and thermal) conductivity of all metals and solar cells plus electric cars are driving demand, while supply remains largely price-inelastic. The gold/silver ratio has risen over the past quarter, as it would in a bear phase, and is now running into resistance just above 70/1; but since mid-2020 it has been contracting as the improving industrial outlook has kept silver more resilient than gold. 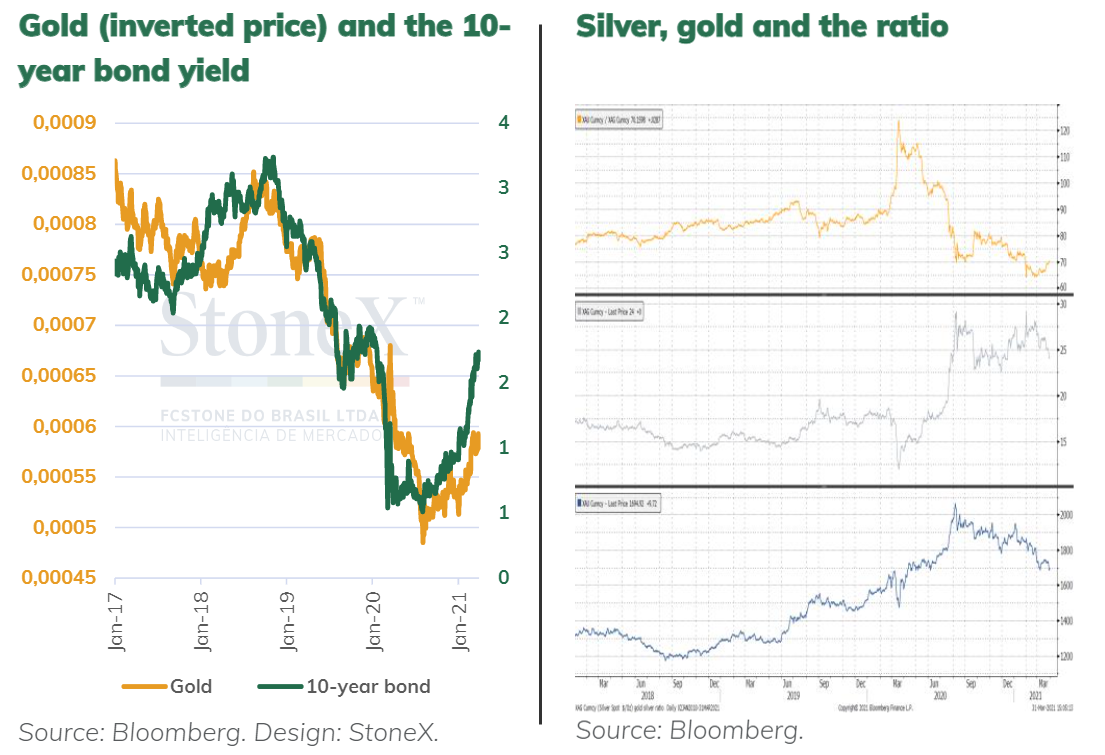