"We may go past neutral, but we're a long way from neutral at this point, probably."  - Fed Chair Powell, 3 October

Oh, what a difference a month makes!

After a big drop in oil prices, a wobble in the stock market, a single interest rate increase, and some sharp criticism from the President, the Federal Reserve has apparently advanced from “a long way from neutral” interest rates to “just below” the level where the central bank may consider pausing.

This dramatic shift in a such a short period of time (for central bankers at least) was underscored by the rest of Fed Chairman Powell’s comments. Powell was at pains to emphasize that the central bank has no pre-set policy path and is paying “very close attention” to incoming economic data. Furthermore, he frequently used the past tense to describe the Fed’s “gradual pace” of interest rate increases, suggesting that the stable, once-a-quarter rate of hikes may soon come to an end.

According to the CME’s FedWatch tool, fed funds futures traders still (reasonably, in our view) have discounted an 83% chance of an interest rate hike at the Fed’s mid-December meeting. However, the market implied odds of two or more interest rate hikes in 2019 has fallen precipitously, with two-thirds of traders now pricing in zero or one interest rate increase in 2019! 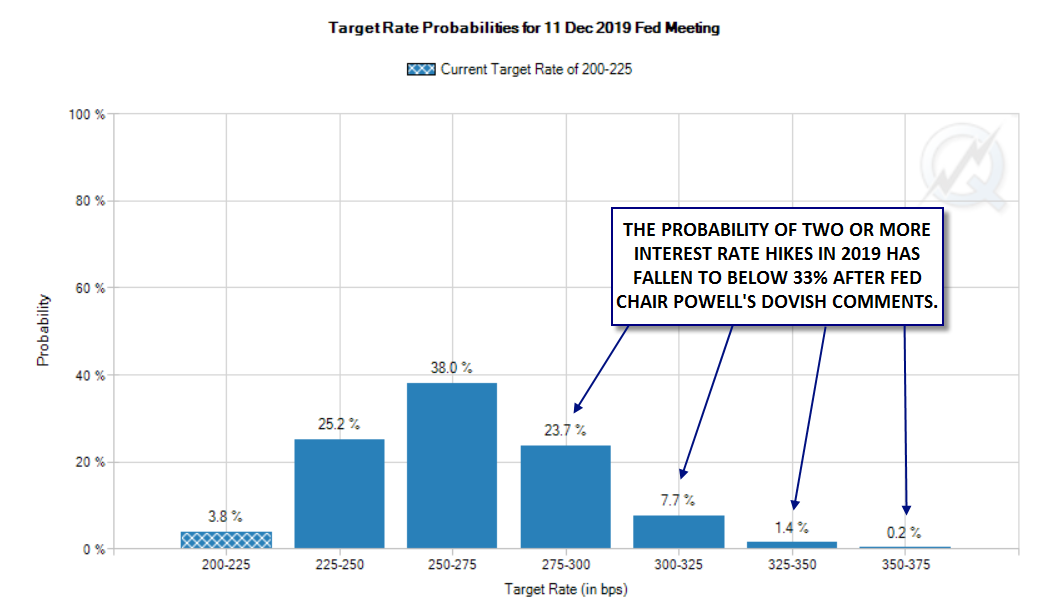 As you’d expect for such a dramatic shift in tone around monetary policy, markets saw a quick burst of volatility as Powell’s comments hit the wires. US stock indices rocketed higher on the prospect of easier monetary policy, with the Dow Jones Industrial Average gaining over 200 points in a matter of minutes. Meanwhile, the US dollar reversed on a dime, dumping more than 100 pips against its major rivals and the yield on the benchmark 10-year treasury bond dropped a quick 2bps.

While some of these early moves have retraced slightly, these comments mark a substantial shift from the market’s previously expected path of interest rate increases, so we wouldn’t be surprised to see continued follow-through, pending the outcome of Friday’s highly-anticipated G20 meeting between Presidents Trump and Xi on trade.