As global inflation readings started to tick up through the first three quarters of the year, policymakers consistently reiterated that the price pressures were “transitory,” driven primarily by temporary supply chain disruptions caused by the ongoing COVID pandemic.

Now, as we approach the end of the year, proclamations of temporary inflation are increasingly falling on deaf ears, and many policymakers are starting to take the risk of sustained price increases more seriously. Naturally, this begs a couple of key questions about inflation:

1) Is inflation here to stay?

First, to reset where we stand as of writing, inflation across the OECD (and most of the major developed economies on the planet) is running above the preferred 2-3% range as the chart below shows: 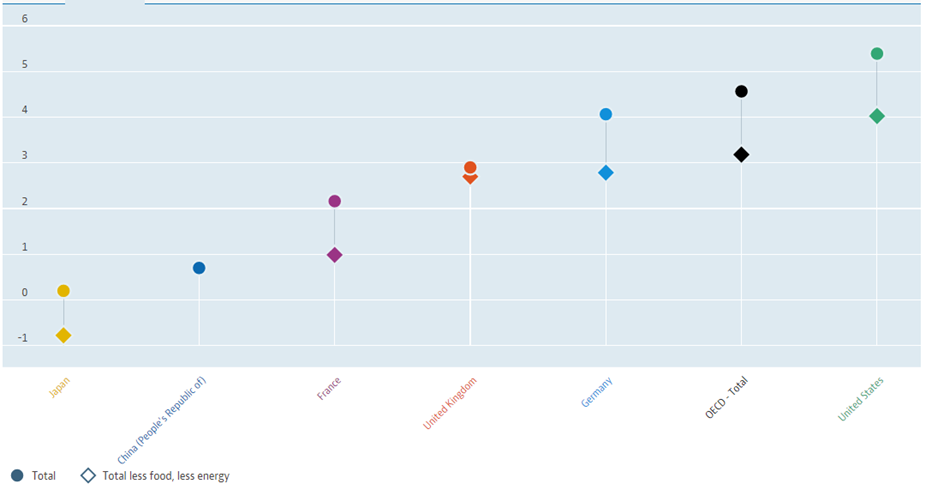 It shouldn’t be remotely controversial to say that at least some of this inflation, especially among certain types of goods, is being driven by temporary disruptions to global supply chains. Likewise, at least some of the inflation can surely be attributed to the unprecedentedly easy policy that central banks and governments introduced to offset the COVID pandemic, dramatically increasingly the money supply.

In our view, the big wildcard to watch will be consumer attitudes. After all, inflation is a somewhat unique economic indicator in that its mere presence can influence consumer behavior, which in turn can influence consumers. Put simply, if people see prices on goods rising, they’ll be more likely to accelerate their purchases of those goods and in so doing, increase near-term demand and decrease near-term supply, exacerbating the price rises.

As my colleague Matt Simpson recently noted, US consumer confidence has fallen to a 10-year low, at the same time that 1-year inflation expectations rose to their highest levels in more than a decade. In other words, there’s some evidence to suggest that the consumers are worried about the recent price increases and expect them to remain in place in the coming quarters, at least in the US. If these same dynamics play out globally in the coming months, inflation could become more heavily entrenched across the developed world.

2) What could change the outlook for inflation?

Of course, the global economy is a complex adaptive system, so the factors driving inflation are constantly changing. On balance, both the current supply chain disruptions and the highly-accommodative economic policies are poised to ease, though perhaps not until closer to the middle of 2022. Clearly, there’s a financial incentive for individual firms and governments to mitigate supply chain concerns, and while these issues are not simple, the profit motive tends to promote creative solutions to setbacks.

Meanwhile, central banks and politicians across the globe have increasingly acknowledged the rising risks of inflation in recent weeks, and as a result it’s likely that we’ve passed peak policy stimulus on a global basis, though each country will ultimately seek to “normalize” policy at its own pace. Again looking at the world’s largest economy as an example, the Fed announced it would start tapering asset purchases earlier this month, and the fiscal impact on GDP is expected to turn persistently negative for the next several years after being a massive positive contributor to growth over the last year and half: 3) Are we at risk of seeing hyperinflation or stagflation?

As many readers have no doubt noticed, we’ve seen more and more headlines about the worst forms of inflation, hyperinflation and stagflation, in recent months. As it stands, the evidence still suggests either of these situations is unlikely, though one is certainly more conceivable than the other.

Hyperinflation, commonly defined as sustained price increases of 50% or more, is highly unlikely among developed nations any time soon. Historically, hyperinflation has not caused merely by large government debt loads and deficits contrary to popular conception. Instead, massive debt loads and deficits tend to be caused by hyperinflation, which is typically driven by a severe exogenous shock to a country’s economy, such as the loss of a war, a regime change, a loss of monetary sovereignty, or rampant government production. While we all may have our qualms with our governments, these types of situations that create hyperinflation have been essentially taken off the table for rich nations, at least in recent decades.

Stagflation, or the simultaneous presence of high inflation and high employment, is at least conceivable to an extent in some countries. Most major countries are seeing relatively low unemployment rates at the moment, thanks in large part to the massive stimulus programs that policymakers introduced to offset the worst of the COVID recession; if anything, many businesses would argue that it’s already too hard to hire reliable workers so unemployment may be more likely to fall than rise from here. That said, surging oil prices were a major contributing factor to the stagflation we saw in the 1970s, and oil prices are once again testing multiple years with minimal prospect of additional supply hitting the market any time soon if OPEC can be believed. Therefore, readers concerned with the risk of stagflation should keep a close eye on oil prices, especially if they start to approach $100/barrel.

As it stands, markets seem to generally agree with policymakers’ view that “inflation is probably still transitory, but the risks of sustained inflation are rising.” Therefore, if you strongly believe inflation is likely to remain sticky or even worsen from here, traditional inflation hedges like real estate and commodities (including gold and even potentially bitcoin) could outperform. Meanwhile, if you think that inflation fears will abate from here, bonds and long duration equities (read: growth stocks and indices) may be poised for a bullish move from here.