Over the weekend, we officially crossed the threshold into the final 10% of the year…but it sure feels like much more than 10% of the year’s high impact economic events are still ahead of us! Within the next week and a half alone, we have a highly-anticipated speech from Fed Chair Powell ahead of the central bank’s December meeting, the much-ballyhooed trade talks between President Trump and Secretary Xi, the potential for a 25% tariff on imported automobiles, and a major OPEC meeting on December 6th to look forward to.

While it remains to be seen how all these developments shake out, it’s clear that the major FX trend going into those announcements has been dollar bullish (as my colleague Fawad Razaqzada outlined earlier today). Similarly, the loonie has been one of the worst-performing major currencies over the last month as the price of oil, Canada’s most important export, has fallen precipitously.

Technically speaking, USD/CAD has formed a clear bullish trend line off its early October lows, with rates gaining 500 pips over that period. From a purely technical perspective, the “two-bar reversal” pattern we saw off support late last week suggests that USD/CAD could well rally to test June’s 17-month high near 1.3400 next. At this point, only a break below last week’s low near 1.3200 (perhaps on the back of a dovish speech from Fed Chair Powell tomorrow, a breakthrough on US-China trade this weekend, or a failure to cut production at next week’s OPEC meeting) would shift the near-term bias back to neutral. 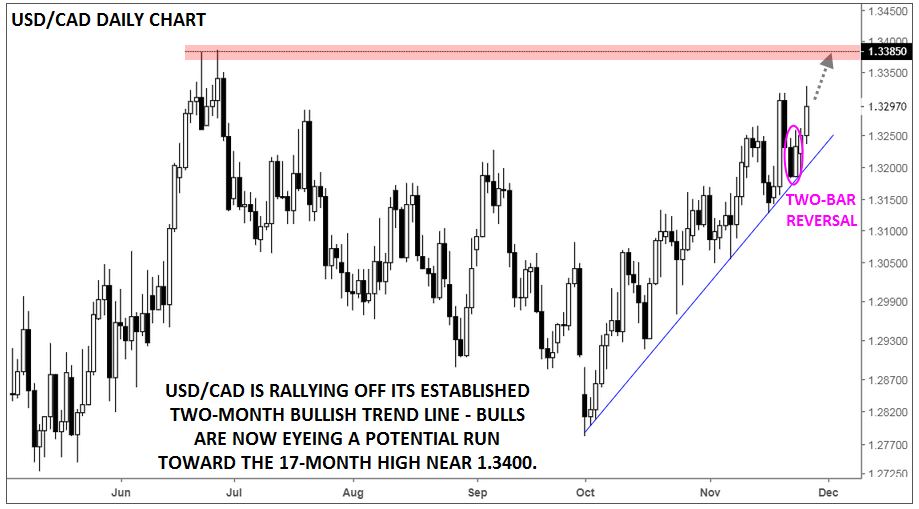