What is a repo? Repurchasing agreements explained

Looking for something specific? Skip ahead with these links:

What does repo mean?

Repo means repurchasing agreement, which is a type of short-term, fixed-income exchange. In a repo, one party sells an asset (normally a security) to another party at a set price, under the condition that they will buy it back at a different, slightly higher price in the future. 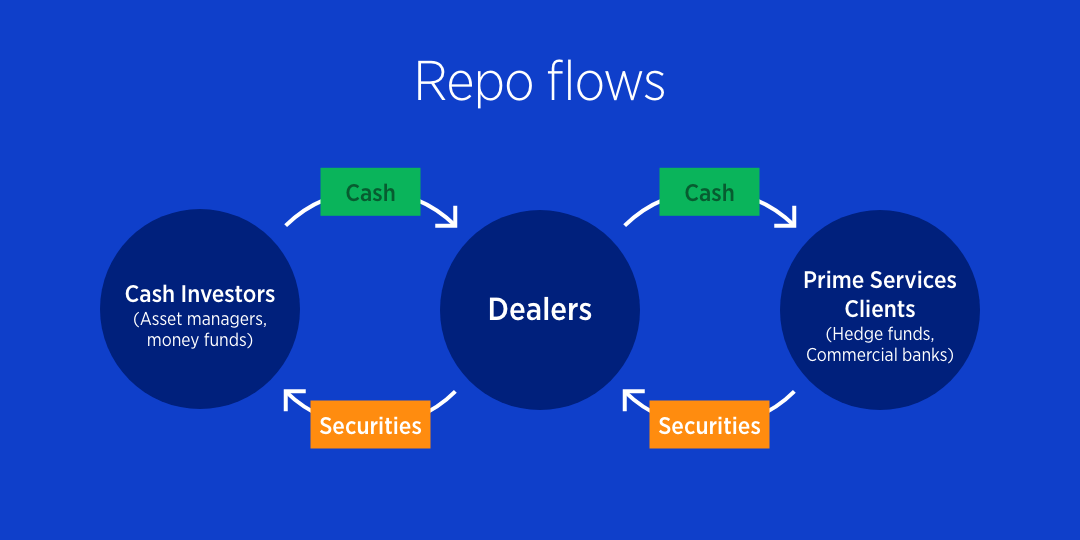 The difference between the price paid by the buyer at the start of a repo and the price received at the end is the return on the investment. Although not technically correct, this return is known as the implicit interest rate or the repo rate. As repo agreements are often only overnight, the repo rate is essentially a proxy for the standard overnight rate.

While the buyer has possession of the security, they have temporary ownership of the asset but under the terms of the repo it’s likely they wouldn’t be allowed to sell it on or use it for speculative purposes. But if at the future date, the seller is unable to repurchase their security, the buyer has the right to sell the asset on.

What is the repo market?

The repo market is the name given the marketplace for collateralised loans. It’s classified as a money market. On average, over $2 trillion repurchasing agreements are traded each day.

Most parties within the repo market are financial institutions that own securities – like banks, brokers and hedge funds – and the repo investors are entities willing to invest spare cash, such as mutual funds.

What is the purpose of a repo?

Ready to start trading? Choose from thousands of financial markets with a FOREX.com account.

What is tenor in repurchasing agreements?

The tenor of a repurchasing agreement is the amount of time before the contract expires. Most repo contracts are only overnight, but different types of repo agreement can be created that either have longer tenors or indefinite tenors.

The length of the repo’s tenor will have an impact on the interest earned from the agreement.

The difference between term and open repo agreements are the amount of time between when the contract is taken out to when the security is repurchased.

Most repos will have set maturity dates; these are called term agreements. When the lender takes possession of the securities, they will know the exact date of closure, which means they can calculate how much interest will be paid to them. Term repos have fixed returns.

Repos that don’t have a buyback date are called open agreements. They work in much the same way except there’s no maturity date, so the contract can only be terminated by one party giving notice to the other party. If no notice is given, the contract simply rolls over into the next day. Instead of being fixed, the interest is mutually agreed upon and paid monthly.

What are the different types of repos?

There are lots of different types of repos depending on the underlying collateral and process of the contract. Here are some of the most well-known types of repos:

Let’s say trader A wants to secure overnight financing and decides to sell 100 shares of company ABC to trader B for a total of £5,000. They agree to buy back the same 100 shares for £5,001 the next day.

This isn’t a sale of the shares, just a temporary loan that uses the shares as collateral. The 100 shares are held by trader B as security in case trader A cannot repay the loan.

The £1 difference between the loan price and the repayment price is the interest trader B will earn on the loan.

How do central banks impact the repo market?

The repo market is both a vital source of information for central banks about the state of the economy, and the way in which central banks carry out monetary policy.

Every commercial bank holds a certain amount of money in reserve, either in its own secure facility or with its central bank. Central banks will set a minimum level of reserve that banks have to maintain, and anything over that level is called ‘excess’. It’s this excess that banks borrow and lend in the repo market.

Let’s look at a recent example of central banks and repo markets. In June 2021, demand for overnight funding through the Federal Reserve’s reverse repo program hit record highs following a significant period of downtime. This means the Fed was allowing commercial banks and funds to keep cash in the Fed overnight, and paying interest, via repo agreements. This hints at excessive market liquidity in the market and could hint that the Fed will start to taper off its stimulus following the coronavirus pandemic.