Bank of Canada Preview: When is the BOC looking to raise rates?

The Bank of Canada (BOC) meets on Wednesday at its regularly scheduled monetary policy meeting. At their last meeting on September 9th, the BOC left rates unchanged at 0.25% and left their bond buying program unchanged.  Latest readings show that jobs and inflation have increased since the last meeting.  September’s YoY headline CPI was 4.4% vs 4.1% in August while the Core print rose to 3.7% from 3.5% in August.  In addition, September’s Employment Change increased by 157,100 vs +90,200 in August and only +65,000 expected.  The most impressive part of the jobs report was that there were +193,600 full-time jobs created vs a loss of 36,500 part-time jobs.

Currency Pair of the Week:  EUR/CAD

At the meeting on Wednesday, the Bank of Canada is expected to cut their bond purchase program in half by decreasing the amount of bonds purchased from C$2 billion per week to C$1 billion per week.  In addition, inflation forecasts are expected to be revised higher.  The BOC has pledged that they would keep interest rates at the effective lower bound until economic slack is absorbed so the 2% inflation target is sustainably achieved.  At the July meeting (the last round of forecasts) the BOC said they expect this to occur in the second half of 2022.  However, markets are currently pricing in a rate hike in April 2022.

USD/CAD has been moving lower since breaking the 50-Day Moving Average and the neckline of a head and shoulders pattern on October 4th.  The pair stalled its move lower on October 14th as it reached the 61.8% Fibonacci retracement level from the June 1st lows to the August 20th highs , near 1.2362.  Since then, USD/CAD has been trading in a range between 1.2288 and 1.2410.  The current correlation coefficient with Crude Oil at the bottom of the chart is -0.97.  A correlation coefficient of -1.00 is a perfect negative correlation.  A reading of -0.97 is pretty close!  Therefore, if Crude Oil continues its long term move higher, its likely that USD/CAD will resume its move lower. 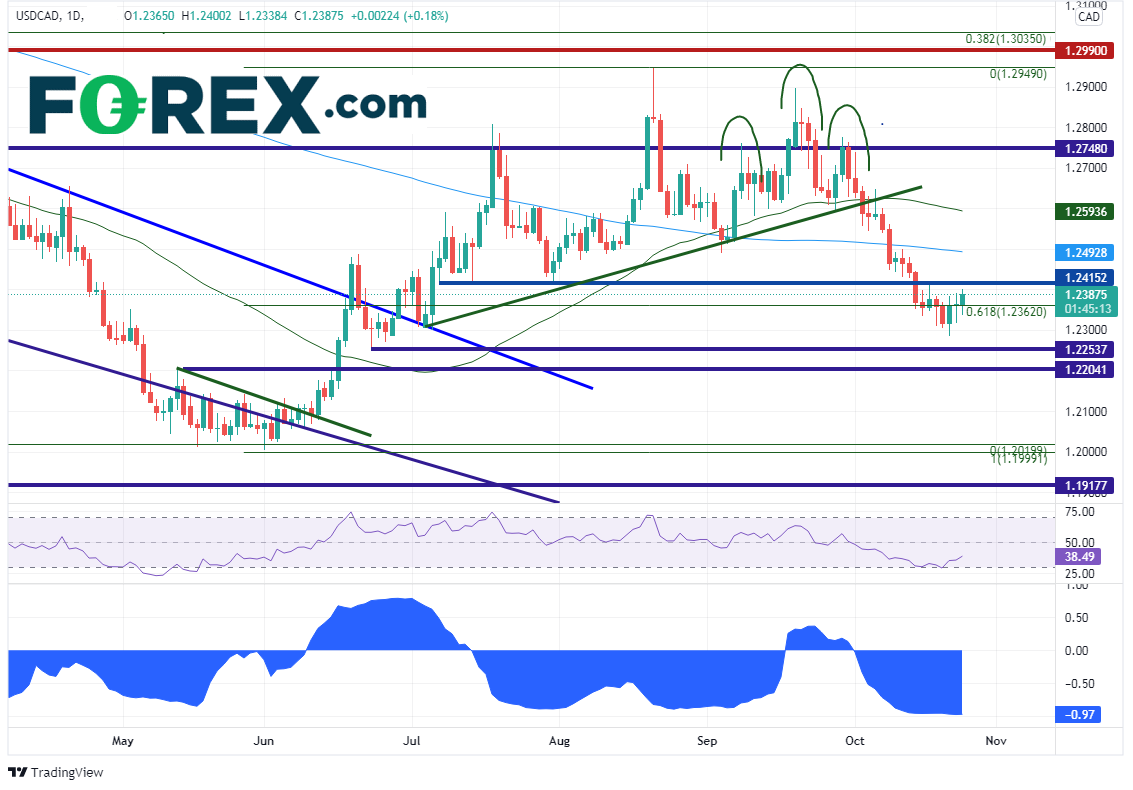 On a 240-minute timeframe, the sideways action over the last few days has allowed USD/CAD to move out of a descending wedge.  The target for the breakout of a descending wedge is a 100% retracement of the move, which is 1.2275.  However, if price is going to get there, it must first pass through horizontal resistance dating back to July 14th at 1.2424. Above there is the 38.2% Fibonacci retracement level from the September 29th highs to the October 21st lows near 1.2474 and then a confluence of horizontal resistance and the 50% retracement from that same timeframe between 1.2531 and 1.2545.  Support is at the October 21s lows of 1.2288 and then the top trendline of the descending wedge and horizontal support near 1.2203. 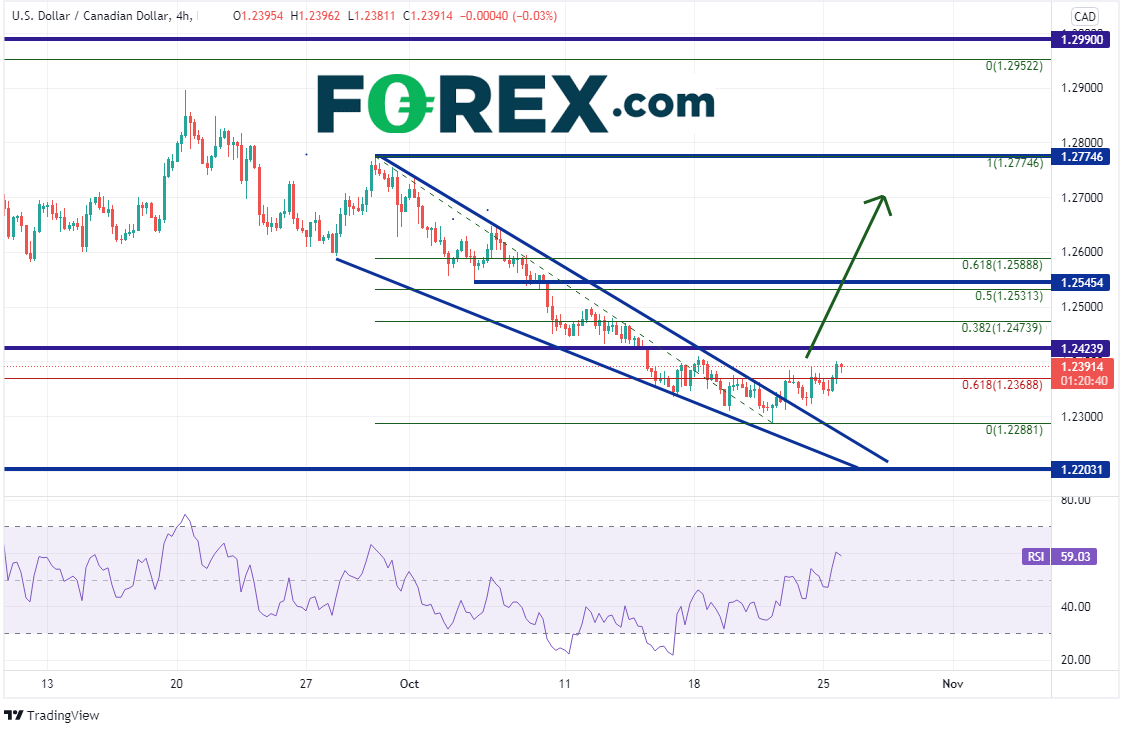 With inflation on the rise and a very strong jobs report for September, the Bank of Canada is likely to cut its bonds purchases in half, down to C$1 billion per week.  If the meeting is “as expected”, the key will be in determining when the BOC is likely to begin raising rates.  Combine that with any volatile moves in Crude Oil, and USD/CAD may be on the move as well.