The Bank of Canada surprised markets and hiked rates by 50bps to bring the target rate to 3.75%, its highest since 2008.  Markets were expecting an increase of 75bps.  However, the central bank noted that although it is seeing encouraging signs that underlying inflation is coming down, it still expects that rates will need to rise further given higher inflation.  The BoC projects CPI to move down to 3% by the end of 2023 and then return to the 2% target by the end of 2024.  In addition, the central bank projects GDP will fall from 3.75% this year to just under 1% next year and 2% in 2024.

During the press conference which followed, BOC Governor Macklem seemed to be a bit “all over the place” in terms of his language.  He said that the central bank is getting closer to the end of tightening but is not there yet.  In addition, he noted that the BOC is still far from the goal of ensuing inflation is low, stable, and predictable.  Later he said it was appropriate to slow the pace of increase in our policy rates from very big steps to a big step , but that the next rate hike could be “larger than normal” or just a “normal sized” one.  Macklem was noncommittal in terms of where Monetary Policy is headed next.  Therefore, traders should be watching the data to determine where rates are headed next.

As one can see, on a 15-minute timeframe, USD/CAD initially went bid on the BOC announcement of a 50bps to a daily high of 1.3651.  This is the type of price action traders expect from a lower than expected rate hike.  However, after the press conference started, the pair was lower than before the rate announcement at 1.353.  Traders determined that based on Macklem’s comments, a 75bps may be in store for December 7th. 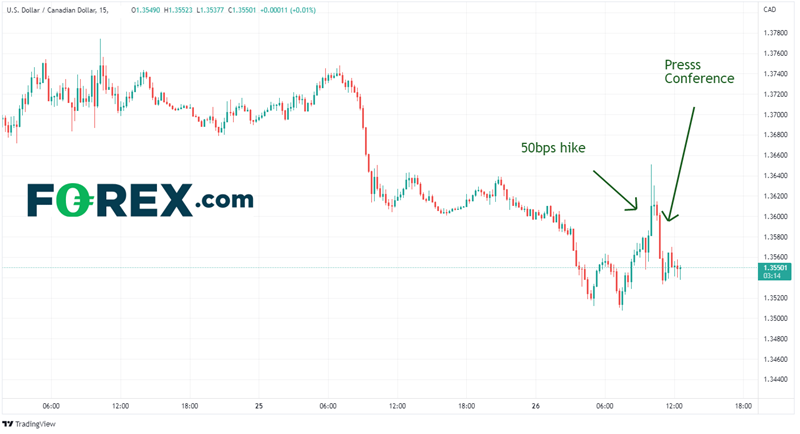 On a daily timeframe, USD/CAD has fallen to a key support level near the confluence at the lows from October 4th and the top, upward sloping trendline of the previous channel near 1.3502.  The 50% retracement level from the lows of September 13th to the highs of October 13th are just below there at 1.3466, then the 61.8% Fibonacci retracement from the same timeframe at 1.3345.  However, if traders see this as an opportunity to take the US Dollar bid ahead of next week’s FOMC meeting, first resistance is at the highs from October 21st at 1.3854, then the highs from October 13th at 1.3978.  If price continues higher, the next level of resistance is at 1.4007, which is the high from the week of May 25th, 2020. 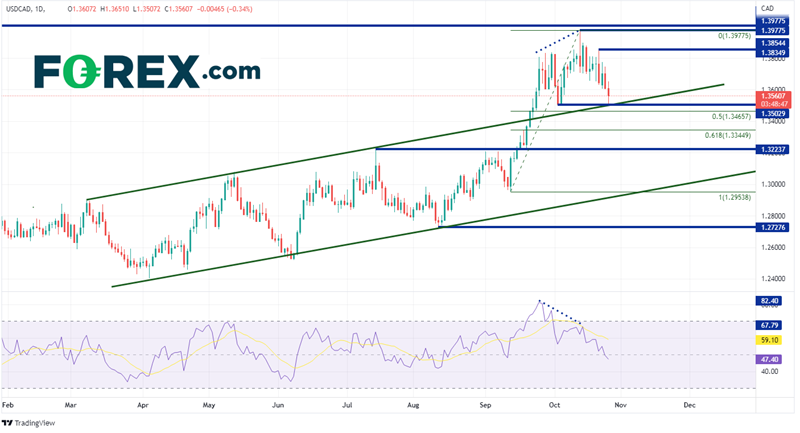 The Bank of Canada has raised rates by 50bps vs an expectation of 75bps.  In doing so, the central bank said that more rate hikes are yet to come.  However, based on Macklem’s statements after the news conference,  the size of the next rate hike is uncertain.  Therefore, traders will be watching the data to try and determine what the BOC’s next move will be on December 7th!